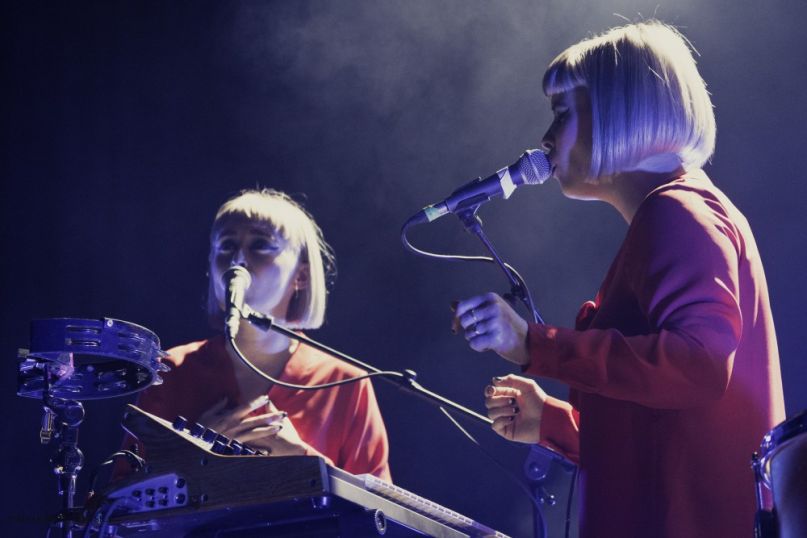 The gentrified North London borough of Islington boasts some commendable music venues from the acoustically blessed Union Chapel to one of the choicer bar rooms, The Lexington. Having worked its way across town on previous sojourns, Brooklyn’s finest, Lucius, tonight pitched up at the Assembly Hall, a rather stately Art Deco building which invites well-mannered audiences into its graceful high-ceilinged splendour. Our protracted cross-London journey aided by a log-jam in the foyer as we awaited passes meant it was possible only to catch the distant strains of the last couple of the opening set from one-man band support, Lapland. The Texan turned fellow Brooklyn-ite belied his ice-cool moniker and seemed to be warmly received. He did sound good through the walls too.

Most of the remaining space inside the Hall was quickly occupied and there was an anticipative air about the place, amplified by loud chatter before Lucius took the stage. It was quickly drowned by a barrage of drums as four of the quintet picked up sticks to usher in “Genevieve” while guitarist Peter Lalish stitched the melody line. It was a powerful opening statement, led by vocal sirens Jess Wolfe and Holly Laessig in matching red shirt-dresses, a vision of neat symmetry. Their communal “oh wa-wa, oh wa-a’s” prefigured wild shaking of twin Germanic blonde bobs, a blistering guitar outro and sudden stop. Loud applause followed and you sensed the band was already on a winning home run after the first ball had been played.

The girls switched effortlessly from unison to harmony singing, always comfortably holding their own above the inventive guitars of Lalish and Andrew Burri, while drummer Dan Molad added punctuation with power and precision. The performance had great dynamics and moments of sheer surprise, like the high harmonies at the end of the next song, “Tempest”. There was no let up as the romantic “Don’t Just Sit There” followed, delivered with passion and peppered with bright, clean guitar runs, bass drum and cymbal accents, and even a Pink Floyd-like bridge.

At times, the female leads called to mind their counterparts in Abba for the way their voices threaded together. Lucius worked through its entire debut album within the set and the sheer quality, range and variety of Wolfe and Laessig’s songwriting was a key element of an impressive live show. Strong women and bold sentiments abound: “We’ll only be bound by the things we choose” they chorused in the free spirited “Wildewoman”. The set was extremely well-paced with a segue of the duo harmonising around a single microphone for “Wonderful” and “Monsters” providing the perfect stripped-back foil to the opening five-song salvo.

A feature of the evening was the band’s connection with the audience. Led by the front women it felt real and genuine; it was so embracing I mostly forgot the appearance of the dreaded smoke machine. The band’s arty, retro stage image sat perfectly well with a mixed crowd whose ages spanned a good 50 years. A strong collection of songs took on an added dimension live through the energy and vitality of Lucius’ performance. The relatively downbeat blues of “Go Home” on record, for instance, was transformed into a dynamic, full-on blast. Killer tune, “Until We Get There” was set alight with hand claps, power chords and an electrifying finale that dissolved into looped guitar notes and an effects-driven instrumental.

In what is clearly a regular and much-loved set-piece, the band delivered the encores from the middle of the downstairs crowd, the girls armed with mics and the boys with acoustic guitars and a drum. A beautifully reflective “The Two Of Us On The Run” was reminiscent of First Aid Kit for the soft, warm harmonies showing that the pair can mix light with shade as well as hit hard. Closing with “Strangers”, the refrain “we are not two/ we are one” seemed especially appropriate. London has clearly taken Lucius to heart and a return visit was promised. After this performance, it would also be great to see the band back here expanding the connection territorially with some summer festival appearances. Do I hear the Other Stage at Glastonbury?

Setlist:
Genevieve
Tempest
Don’t Just Sit There
Wildewoman
Nothing Ordinary
Wonderful
Monsters
Until We Get There
How Loud Your Heart Gets
Hey, Doreen
Go Home
Turn It Around
Encore:
The Two Of Us On The Run
Strangers