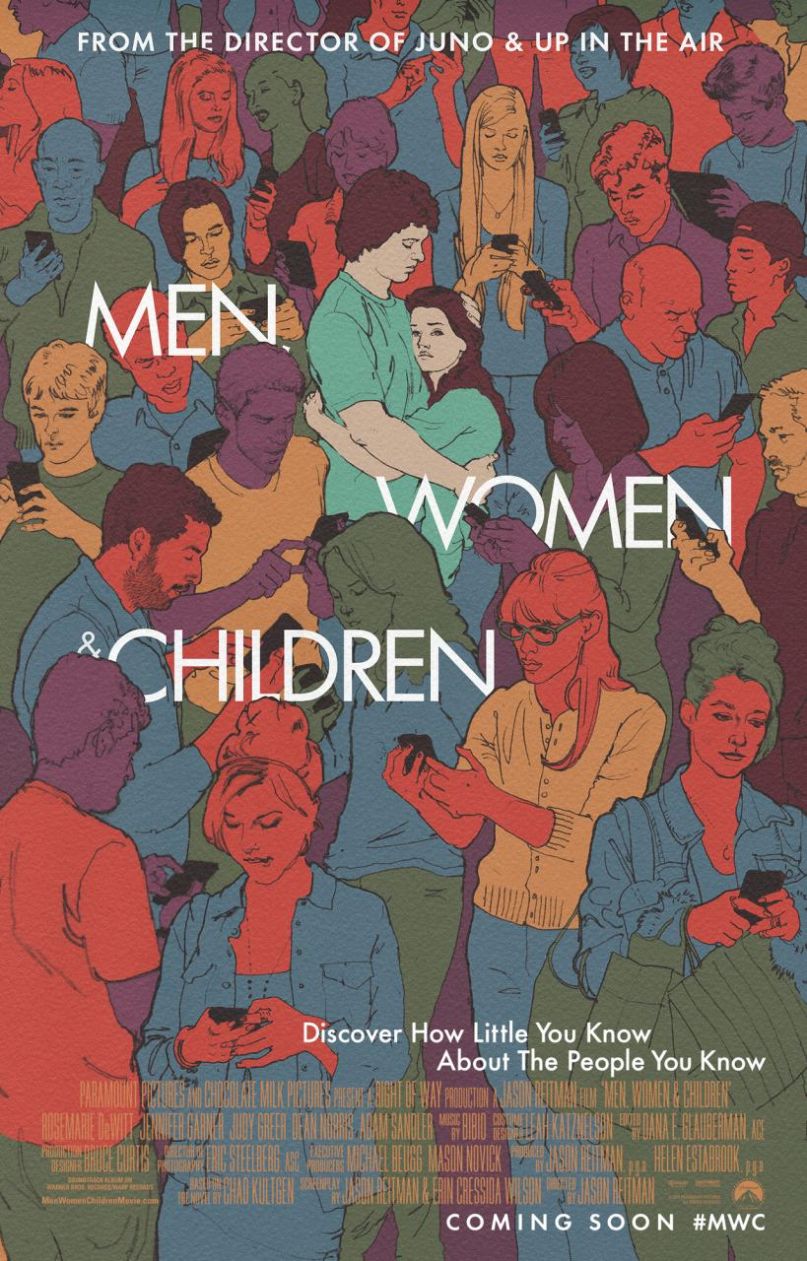 Stop me if you’ve heard this one before: a prestigious, topical ensemble film casting well-known actors against type in hopes of making a grand statement of some sort about How We Live Today. The latest installment in what seems to be a frequent, almost annual series of these films is Men, Women & Children, Jason Reitman’s latest expedition into the many schisms in the suburbs. The latest theme for his broad (and almost exclusively Caucasian) exploration of the human condition is the Internet and the infinite ways in which it’s forever altered the way human beings relate to one another, as well as the world at large. The film has a lot to say on the subject, and some of it has a certain grace, but a fair bit more of it feels like a fusion of Degrassi: The Next Generation and Todd Solondz’ Happiness, in the most unintentionally absurd ways.

Often, Men, Women & Children feels as though it’s working through a pre-approved list of modern technological panics, most of which are related to protecting the leaders of tomorrow from smut and corruption. There’s a Reefer Madness-esque hysteria to portions of the film that make it impossible to take seriously, even as Reitman works intermittent portraits of aching loneliness into the morass of hand-wringing on display. How bad does it get? Consider for a moment the briefest possible synopsis this writer could work out for the film’s sprawling display.

There’s the tale of the milquetoast, married Trubys, Don (Adam Sandler) and Helen (Rosemarie DeWitt). Their steady but increasingly loveless marriage drives him to an escort website and her to Ashley Madison (helpfully branded onscreen for unwitting audience members about to learn how to have quick and easy extramarital affairs). Patricia (Jennifer Garner) uses technology to lord over her daughter Brandy (Kaitlyn Dever) every second of every day, which pushes Brandy into the path of Tim (Ansel Elgort), a former starting runningback whose infinite ennui pushed him away from sports and into the maw of Guild Wars. Tim’s father Kent (Breaking Bad’s Dean Norris) has no idea how to relate to his son after his wife abruptly left him, and this leads to him meeting Donna (Judy Greer), an overzealous stage mom to Hannah (Olivia Crocicchia), whose budding sexuality and reality star aspirations draw the attention of Danny (Timothee Chalamet), the Trubys’ son, whose porn addiction has left him unable to enjoy vanilla, everyday sex.

Still there? If you’re not, it’s understandable. All of the above doesn’t even do justice to how much topicality the film crams into those stories, or the juxtaposition of the whole thing with Carl Sagan’s “Pale Blue Dot” as the Voyager 1 made its way into the recesses of space, or Emma Thompson’s American Beauty-esque omniscient narration over it all. This is Reitman’s Big Statement in every possible way, and he comes armed with a riot of narrative approaches, moving from hard drama about an innocent, bulimic cheerleader to Adam Sandler describing the banal particulars of his job during fellatio to a mostly disinterested escort at whiplash-inducing speeds.

Like most films this broad in scope, though, there are moments in Children that cut through the noise and deserve the empathy they earn, most of which surround that third category of humankind. While the film’s other logical error comes in its presumption that most of its melodramas are new and uncharted territory (very few are), most of the scenes between Elgort and Dever suggest what might’ve been a better look for the film. Their halted exchanges, rendered onscreen in purposefully distracting text and message bubbles, make for a moving assessment of teen angst and do the best job of extolling the film’s critiques of how impersonal smartphones have made what Tim instinctively only calls “RL.” Being a teenager is already an isolated experience, made more so in a time where Tumblrs become places of refuge for confused adolescents and the vices of the world have never been more accessible at younger and younger ages.

But where those scenes are keenly observed, too often the film turns ponderous instead. By film’s end there’s a suicide attempt, an ectopic pregnancy, multiple tearful breakdowns, more than one instance of people literally running to or away from their problems, and unexpected moments of mutual connection aplenty. Some of the stories at least conclude with an intriguing archness, but at least one character who makes a reprehensible late-game decision is given an undue pass, and the stories don’t really pay off or even coalesce all that meaningfully, so much as they halt when Reitman runs out of bullet points.

Men, Women & Children manages to touch on a lot of ideas, all filtered through a debatably useful teenage sense of nihilism via the continual invocations of Sagan. It has lots to say about how the children are too naked or too unrealistically horny or too sheltered or too free, and about how their parents are all having constant panic attacks, if they’re not every bit as lonely. There’s no room for the sense of community that the online world affords at its best, and for the film’s pearl-clutching sense of scandal throughout, it only flirts with the truly dangerous parts of the Web at its worst. And ultimately, when it comes time to tie it all together into something memorable, the film offers only its equivalent of a shrugging emoticon in reply.