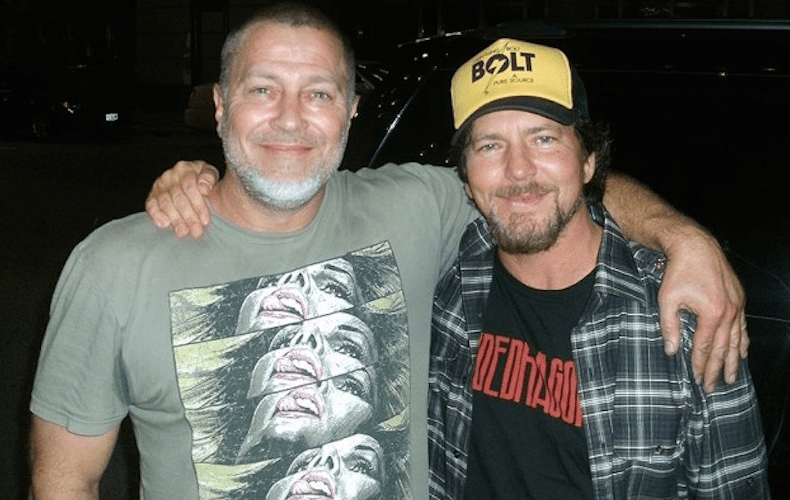 Pearl Jam’s Eddie Vedder recently made headlines when he paid tribute to John Lennon with a great cover “Imagine”. However, he doesn’t just honor legendary musicians, Vedder’s a man who honors promises to his fans, too. As Diffuser notes, earlier this month the frontman fulfilled a fan’s 22-year-long promise.

As the story goes, shortly after a 1992 Pearl Jam concert at Bogarts in Cincinnati, avid fan Joe Wolfe ran into Vedder at a nearby movie theater. Unfortunately, since camera phones didn’t exist at the time, the once-in-a-lifetime moment sadly went undocumented. The only consolation Wolfe had was Vedder’s promise that “he would do a picture with me the next time I saw him.”

Fast-forward decades later, Wolfe again encountered Vedder, this time at the band’s 18,000-capacity show at Cincinnati’s US Bank Arena on October 1st. Wolfe reminded Vedder of his promise hoping that he’d finally get that prized photo. Although Vedder initially said no on the spot, Wolfe eventually got WAY more than a pic: After the concert, not only did the Pearl Jam singer pose for a picture (seen above), but he also invited Wolfe backstage and gave him a guitar pick and autograph.

A tale this heartwarming can’t be possibly be true, right? Wrong. During the concert, Vedder actually took time out of the band’s set to talk about Wolfe and the decades-long promise and below is proof. (Yeah, just so we’re all on the same page about how goddamn lucky Wolfe is, let me reiterate: Wolfe got a picture, autograph, guitar pick, and personal shout-out.)

Watch video of Vedder’s shout-out, including an amusing story about why he first opted out of a picture (hint: it involves a stolen joint).