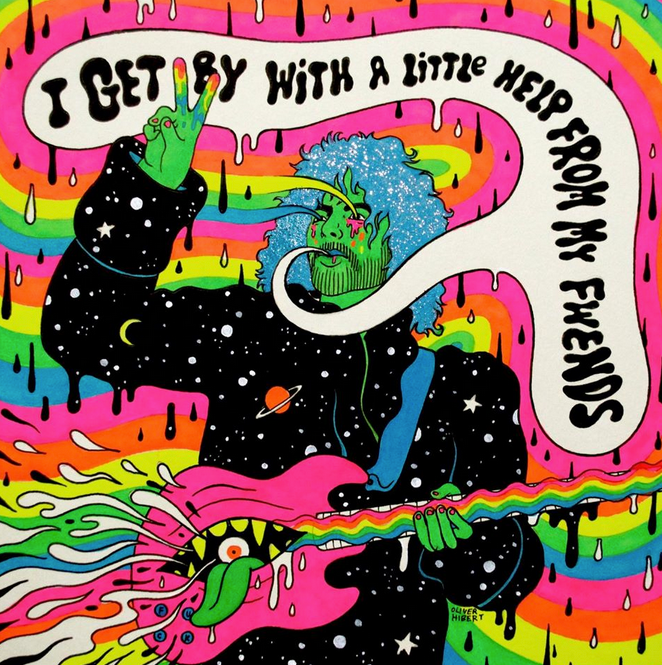 On October 28th, The Flaming Lips will release their star-studded covers album of The Beatles’ Sgt. Pepper’s Lonely Hearts Club Band. In anticipation, the album is streaming in full over at NPR.org.

Back in 2009, The Lips released a similar collaborative remake of Dark Side of The Moon. In an interview with Music Radar, frontman Wayne Coyne discussed people’s reactions to tackling icons like Pink Floyd and The Beatles.

People get very proprietary about this sort of thing. When we did Floyd’s Dark Side, there were some people who had these violent, outraged reactions to us. It’s like we defiled a classic or something. I mean, sure, there’s only one Mona Lisa, so if you put a mustache on it, you really fucked it up. But music isn’t like that. Dark Side Of The Moon by Pink Floyd still exists, and Sgt. Pepper by The Beatles will still exist. We just did our homages to those records, because they inspired us.

Coyne explained part of the appeal to cover Sgt. Pepper’s  is how hip the record remains, despite being released in 1967:

It was a special record – and still is. Back then, it was one of the first records that people would sit around and talk about. The drugs The Beatles took, the clothes they wore, they way they did their hair – all of those things were connected to the music, and they were talked about. Sgt. Pepper has amazing music, but it’s really about more than the music. It’s of a time, and now it evokes that time. And the amazing thing is, it lasts – there’s nothing retro about it. It’s still very hip, fresh music.

The album is preceded by two singles, a Miley Cyrus-and-Moby-aided rendition of “Lucy in the Sky With Diamonds” and Electric Würms’ take on “Fixing a Hole”.

Pre-orders for the album are ongoing. Below, watch the album’s trailer.

Proceeds from the LP will benefit the Bella Foundation, an organization in the band’s Oklahoma City hometown that helps low income, elderly, or terminally ill pet owners with the cost of veterinary care.