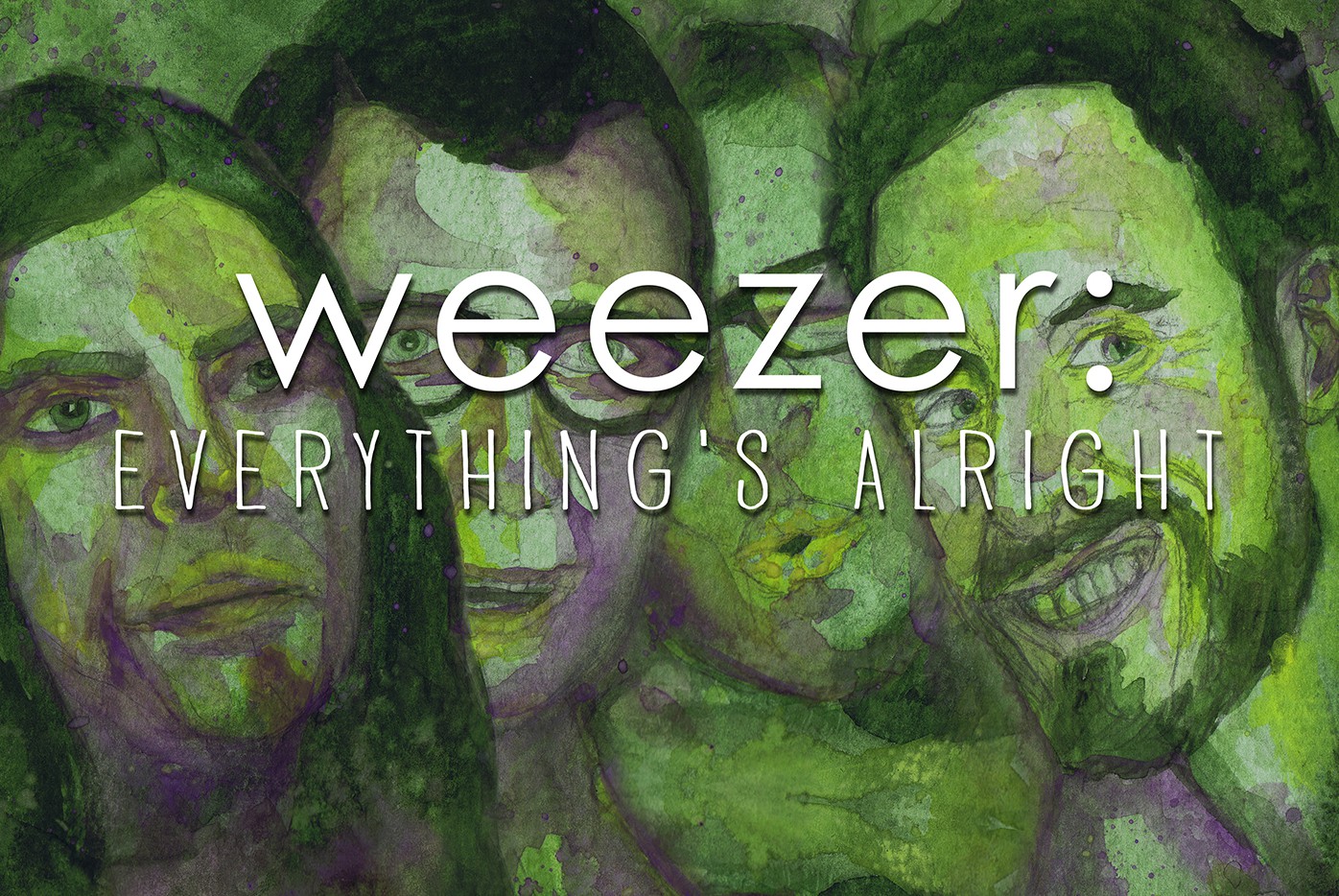 “Goodbye heroes, you’ve had a good run,” Rivers Cuomo, 44, sings on “Eulogy for a Rock Band”. “Fifteen years of ruling the planet, but now your light’s fading.” At three and a half minutes, it’s the smartest track Weezer’s pieced together in over a decade and the centerpiece of their finest studio album in just as many years. Nobody saw this coming, but we should have. The writing’s been there all along: on the wall, the couch, the cupboards, and the floor.

In July, drummer Pat Wilson hinted that the album was “going to have the tight structure of the Blue Album with a little bit more abandon like Pinkerton.” Meanwhile, early single “Back to the Shack” has been floating around on YouTube since February, following its high-seas debut aboard the band’s own cruise. Lyrically, the song is quite up front with its own epiphanies (“Maybe I should play the lead guitar, and Pat should play the drums”) and desires (“Kick in the door, more hardcore/ Rockin’ out like it’s ’94”). Weezer’s not holding back any secrets.

We just didn’t buy any of ’em.

As such, Everything Will Be Alright in the End comes as a surprise, stomping and roaring about as the comeback album that both fans and Weezer deserve. Produced by Ric Ocasek, who oversaw their 1994 iconic self-titled debut and 2001’s platinum-selling third LP, the album’s 13 tracks feel like a pristine time capsule that’s been uncovered after two decades and given a focused dusting. It’s punchy, it’s clever, it’s nostalgic. It’s Weezer.

“I’d say, from the very first album, Weezer has had a sense of nostalgia and an interest in classic rock music like The Beatles and Beach Boys,” Cuomo explains over the phone as he strolls around outside. In a little over 24 hours, he’ll perform at Riot Fest Denver, where he’ll once again revisit the band’s debut album in full. “Even from the first album, it already had an old-school feel with two guitars, bass, and drums … doing the same thing bands have been doing for decades.”

But there’s an unshakeable return to form on their ninth studio effort. As Dan Caffrey writes in his Top-Rated review, “Everything Will Be Alright in the End doesn’t just transport us to Weezer’s younger days — it ushers us into their future.” Opener “Ain’t Got Nobody” kicks down the door with a six-string attack that rivals the punky house party of Maladroit. “Lonely Girl” piles on the angst that made Pinkerton so timeless and vital, while “Da Vinci” laces in the cutesy hooks of 2001’s Weezer, a melodic chorus mirroring Pinkerton, and the modern bite that Cuomo’s sharpened more recently.

Cuomo insists that despite the nostalgic sound, there are plenty of “new experiments and innovations in this record that [they] never tried or that never occurred to [them].” I point out his acute vocal work, specifically the glam rock flourishes of “I’ve Had It Up to Hear”, the breathless melody for new single “Cleopatra”, and the hair-raising choruses for “The British Are Coming”.

“Yeah, that’s exactly right,” Cuomo agrees. “Finding these new places in my voice and singing a lot higher, in falsetto, up in that range you’d expect to hear from Judas Priest or something.”

He’s not too shabby on the guitar this time around, either.

“The guitar shreddage is a whole new level, and that last song,” — he’s referring to “Return to Ithaca” — “there are so many shredding guitar parts that Pat [Wilson] has to play one of the guitar lines, and our bassist [Scott Shriner] had to play a double neck bass and have a guitar built. It’s five guitar solos at once.”

The illustrious “Ithaca” is just one part of “The Futurescope Trilogy”, which also includes “The Waste Land” and “Anonymous”. The three tracks close out the album with a cacophony of guitars, percussion, and harmonies. It’s as if Cuomo finally gets to revisit the sweeping rock epics of his alma mater — Love Gun, Metal Health, or Screaming for Vengeance, for example. He hasn’t sounded this alive behind a six-string since 2002’s Maladroit.

“I think whatever elements that sound traditional came as a result of spending time with fans and playing these throwback shows,” Cuomo observes. “It’s not much of a conscious decision. That’s the world we’re living in right now. As artists, we naturally adapt to the environment we happen to be in.”

Weezer has spent their share of time in the ’90s these past five years. In 2010, to support Hurley, the band set out on their successful Memories Tour, which saw them revisiting their self-titled debut and Pinkerton in full, for a good three years. In 2011, Cuomo capped off the year with his third Alone series, subtitled The Pinkerton Years, which came packaged with a collection of essays, letters, photos, etc. labeled The Pinkerton Diaries. In January 2012, they set sail aboard their first Weezer Cruise, which Cuomo calls “a turning point” for the band.

“It was very close contact with our most hardcore fans for a period of five days,” Cuomo says. “No one had an Internet connection. We just got really close and got to know and trust each other again. We got a lot more in sync with where Weezer came from and who we are in our freest selves.”

There have been dicey situations in the past with Weezer’s fans, who certainly have a boiling point. In 2010, self-professed detractor James Burns even ignited a campaign to raise $10 million in an effort to get the band to break up. “I am tired of my friends being disappointed year after year,” he wrote. “I am tired of endless whimsical cutesy album covers and music videos. … I beg you, Weezer, take our money and disappear.” Because it’s the Internet, the news spread fast and the band eventually responded in true Weezer fashion. “If they can make it 20 (million), we’ll do the deluxe breakup,” Wilson joked on Twitter.

With regards to legitimate, diehard fans, I discuss the stratification of their fanbase some 20 years later. Like Green Day, Weezer has a following that includes both young and old. Many of their fans weren’t alive when Pinkerton was released in 1996. This isn’t exactly a problem, but it does create new through-lines and origin stories. A couple weeks ago, Consequence of Sound dusted off American Idiot, Green Day’s blockbuster seventh studio album, for its 10th anniversary. One fan left a very telling comment:

I was 8 when I first heard the album, it was an introduction to Green Day for me, and no kidding it was a whole five years later I realised they had about ten years worth of material before that. Friends I talk to remember the album well, and again I’m not kidding when I say they don’t know of pre-AI material. For this reason I genuinely believe American Idiot, not Dookie, is Green Day’s definitive album.

The same fans could probably argue the same for Weezer. For many, The Green Album in 2001 was their beginning, and it wouldn’t be a surprise given the success of “Hash Pipe” and “Island in the Sun”. Even 2005’s polarizing Make Believe might have won fans over; do you remember how prominent “Beverly Hills” and “Perfect Situation” were at the time? Later albums were just as sticky on FM radio. Yet, despite these differences, Cuomo feels elated.

“I feel like this is the greatest achievement in our career,” he says. “It’s a great thing. These are the people that we are with all the time and we’re gonna spend the rest of our lives with. It’s a wonderful feeling that that relationship is more harmonious.” He digresses on his “rocky” time surrounding the band’s debut and how he experienced “a great craving for appreciation and recognition for what [he] thought was such a deep and powerful record.” He never received it.

“As it turned out, the average age of our fans was about 10 years old,” he adds. “It was hard for me to feel any deep connection, and I ran in the opposite direction, and I felt really disappointed and dissatisfied as many do when they get everything they wanted.” He says these feelings influenced “an even more personal record” with Pinkerton. At the time, he said: “I’m not coloring anything or softening anything. This is who I am and if you don’t like it … well, we should probably part ways, and I’m just gonna tell you the very worst parts of myself.”

Despite its widespread acclaim today, the album debuted at No. 19 on the Billboard 200 and received its unhealthy share of negative reviews. Rolling Stone‘s Rob O’Connor called the album “juvenile,” and their readers voted it as the third worst of that year. Meanwhile, Cuomo crumpled into a ball of self-deprecation. In his Pinkerton Diaries, he wrote: “This has been a tough year. It’s not just that the world has said Pinkerton isn’t worth a shit, but that the Blue album wasn’t either. It was a fluke. It was the video. I’m a shitty songwriter.”

Those years are long behind him now, but Cuomo’s since made peace with that time period. “A lot of those early fans did part ways,” he contends. “But we were left with a core audience of people that really appreciate us despite the ugliness and self-contradictions and reality of who we were.

“That feeling of being appreciated for who I really was … I don’t have the same disappointment I had. I think my expectations were too high, and it takes time to build a relationship. I have an unusually strong desire for a close relationship, and I very easily get dissatisfied when I feel the relationship is just small talk and politeness and shallowness. It takes time to get to this stuff.”

Blockbuster success in the early 2000s factored into that confidence, but this reasoning certainly explains the band’s more experimental last decade: collaborations with Lil Wayne, Lady Gaga covers, and why Hurley from Lost is a part of the Weezer mythos. What’s more, it also lends credence to their latest album and how it may be the ultimate gift to the band.