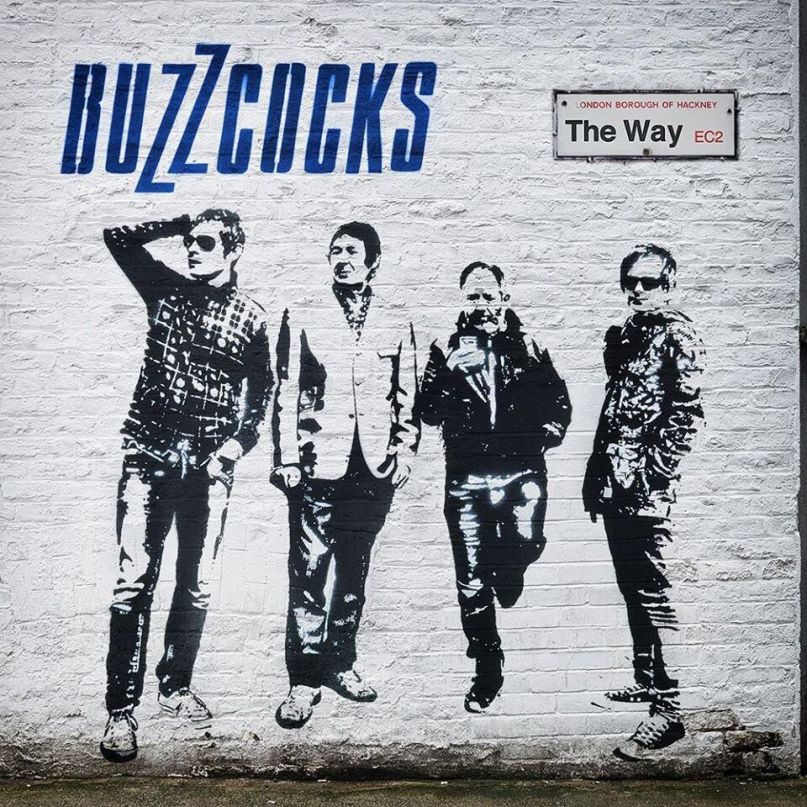 The Buzzcocks don’t belong to the 21st century, and they would probably be the first to tell you that. These boys belong to an era of fast cars and loud guitars, of radio singles and B-sides played at 45 revolutions per minute. Never has this been more apparent than on The Way, the Buzzcocks’ ninth studio album and sixth since they reformed in 1989. Less concerned with fictional romance than with virtual reality, it’s an anxious record from a band that should be settling comfortably into old age. It’s also a powerful argument for why the Buzzcocks remain relevant in spite of their increasingly troubled take on modernity.

More or less the sole survivors of England’s first wave of punk, Buzzcocks co-founders Pete Shelley and Steve Diggle have always approached the genre from their own angle. The fact that they’ve stuck around this long is just another example of their stubbornly doing things on their own terms. Remember, these are the guys who casually produced the first independent punk record of all time (1977’s Spiral Scratch EP) and later tried to turn a song called “Orgasm Addict” into a crossover hit.

When the Buzzcocks did break into England’s mainstream, it was on the back of a formula truly unique at the time: punk’s irreverence mixed with the melodies and subject matter of traditional pop music. While their peers dabbled in nihilism and pandered to populist sentiment, the Buzzcocks were content writing love songs — love songs with a caustic edge, yes, but love songs nonetheless. This was no less revolutionary than anything the Sex Pistols or the Clash were doing at the time. Punk in its earliest days was rooted in an antipathy toward pop music, and to marry the two seemed counterintuitive at best and sacrilegious at worst.

And yet, it worked. The Buzzcocks were perfectly suited to the time and place from which they arose and perhaps more responsible than any of their peers for bringing punk to the masses. What’s more surprising is how well it has continued to work; since they reformed, the Buzzcocks have produced six albums of remarkably consistent quality. The music hasn’t exactly evolved, but who cares? There’s something to be said for sticking to what you’re good at, and Shelley and Diggle were born to write hooks. They’ve also found subtle ways to diversify their formula while staying within themselves, a trend that started with the post-punk experiments of A Different Kind of Tension (1979) and carried on through Flat-Pack Philosophy (2006).

To call the Buzzcocks’ newest record “experimental” would be a stretch. The hooks remain at the forefront where they’ve always been; Shelley and Diggle aren’t about to reinvent the wheel. Both men turn 60 next year, and while there’s a certain world-weariness simmering beneath the surface of The Way, both sound as spry as ever. Album opener “Keep on Believing” kicks down the door in vintage Buzzcocks style, reminding us of what pop punk sounded like before such a term even existed. And yet, this is a band that doesn’t seem interested in writing simple love songs anymore. “If you feel it in your heart and soul/ Then you’re in control,” sings Shelley. It’s clear that chasing love is now less important to him than staving off life’s daily anxieties.

Diggle takes over the mic for “People Are Strange Machines”, a song whose quizzical lyrics seem to support the thesis espoused in the title. Anyone who’s seen the Buzzcocks live is aware of Diggle’s penchant for showboating, and he gets his chance here with searing guitar lines that never get in the way of the song’s straightforward appeal.

The Buzzcocks have always thrived on the tension — both personal and musical — between Shelley and Diggle, and that tension is tangible on the first two tracks of The Way. Shelley’s bleating, helium-soaked voice has become even more of a foil to Diggle’s growl over the years, and hearing the two back to back is a powerful reminder that the Buzzcocks have more than just one trick up their sleeves.

As if likening people to machines wasn’t obvious enough, the Shelley-fronted “Virtually Real” pulls no punches in addressing the evils of social media and, yes, those nefarious LOLcatz. The song marks a jarring shift in tone from rockers “The Way” and “In the Back”, with Chris Remington’s dark, vaguely industrial bass line serving as the backbone to Shelley’s musings on isolation in the modern world. His voice is coated with cynicism and, during the chorus, drenched in reverb, producing a heavily symbolic moment in which he’s shouting Facebook notifications (“profile updated, it’s complicated”) in an echo chamber. This moment marks the album’s midway point as well as its emotional core. Elsewhere, the anxiety merely peers out from beneath the surface; here, its placement front and center makes it harder to ignore.

All of this is not to say that The Way is a bummer. In fact, “Virtually Real” is immediately followed by three of the album’s most gleefully upbeat tracks. “Out of the Blue” is a danceable song that layers meaty guitar riffs over a swinging beat courtesy of drummer Danny Farrant, and “Chasing Rainbows/Modern Times” is perhaps the most vintage-sounding tune the Buzzcocks have penned in years. Sure, the title and chorus reference the same anxieties apparent elsewhere on the album, but it’s hard to take those anxieties quite as seriously when they’re sandwiched between punchy pop punk riffs.

It’s both strange and entirely fitting that the Buzzcocks named this particular record The Way. Such a title connotes forward progress, a notion they seem practically allergic to at times. But it also signifies their willingness to accept what’s real and try to plot a course through the muck. “It’s all about saving yourself from desire/ In this world of control,” Diggle sings on the album’s brooding closer, “Saving Yourself”. The Way is the Buzzcocks’ latest attempt to save themselves, and once again they’ve proven up to the task. After all, you don’t get to be the last gang in town without surviving a fight or two.