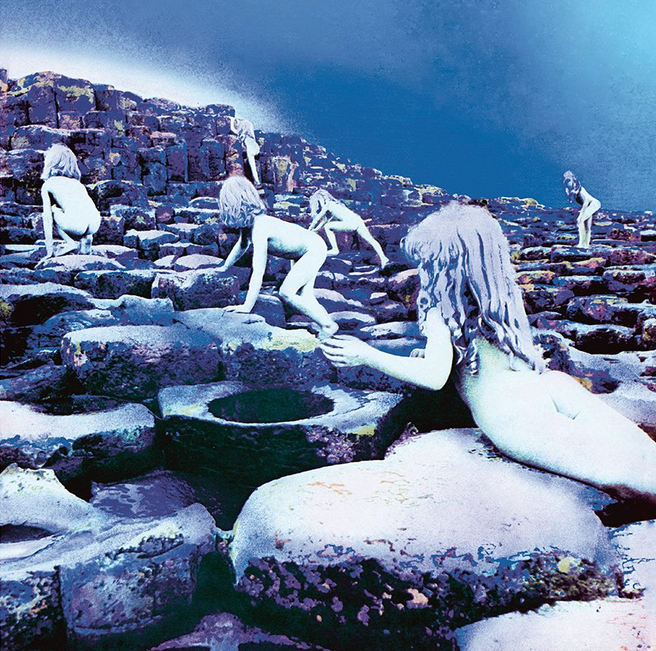 What does a mountaineer do once he summits the highest peak? He dives off and learns to fly. Such was the situation, and solution, of Led Zeppelin’s members in 1972 as they planned their follow-up to Led Zeppelin IV. This prior album needs no introduction, being one of the great critical and commercial successes of the age (or ever, for that matter). But instead of going back to the blues rock/heavy metal sound that had vaulted them to international fame, they chose to spread their wings, step off the cliff, and pray they wouldn’t come crashing to earth.

Houses of the Holy is perhaps the most musically diverse of all the Led Zeppelin albums, certainly of the early albums. Albums I through IV were built around variations of electric blues progressions with the volume and distortion turned all the way up and traditional, acoustic English folk. Robert Plant populated these landscapes with repurposed Delta blues sentiments or fanciful pseudo-medieval balladry. Silly as it sounds in these terms, this combination was an unqualified success. Those first four albums represent a stunning debut and a step-by-step apotheosis. Sometimes album five, Houses of the Holy, gets obscured by the towering shadow of Led Zeppelin IV. But this re-mastering and re-release provides an excellent opportunity to dig deep and explore the bold oddity and sonic exploration that distinguishes House of the Holy among its peers.

From the first exquisitely plucked notes of “The Song Remains the Same”, we hear Jimmy Page developing a new guitar aesthetic. The weight and darkness of the distorted blues rock of the previous albums have been washed clean, and Page’s tone is sharp and bright. As the elements build, Page’s burgeoning studio wizardry reveals itself, as the delicate interplay of his layered guitar lines becomes almost orchestral in its depth. Once the rhythm section joins the fray, the new aesthetic had been codified. The last we had heard from John Bonham was the iconic, echoing power of “When the Levee Breaks”. But on “The Song Remains the Same”, Bonzo is mic’d without flourish. His hi-hat is crisp and splashy, and he provides an athletic backbeat without sounding ostentatious. As the band moves through the many changes of “The Song Remains the Same”, they are tight yet nimble, proficient yet unpretentious.

This clear, high tone is the most consistent element throughout Houses of the Holy. “The Rain Song” is one of the most sentimental tracks in Led Zeppelin’s catalog, but it is also patient and beautifully arranged. Instead of the angry, spiteful swagger of “Heartbreaker” or “Since I’ve Been Loving You”, Plant’s lyrics and vocals infuse a sense of humanity, loss, and transcendence — a touch of emotional maturity.

The clean rock sound peaks with the divine “Over the Hills and Far Away”. Again, we begin with Page performing nimble and iconic guitar work. The remastering lends fully fleshed tones to his acoustic strings. Plant’s voice is pushed even further in the mix, and he sounds fantastic stretching the limits of his range in this tale of love lost, found, and lost again.

The James Brown-indebted “The Crunge” notwithstanding, House of the Holy is a tale of two halves. The first half is largely devoted to a crisp and expansive rock sound, the second a wild ride through genre exploration. Side two opens with the swinging “Dancing Days” before presenting two experiments, one with reggae (“D’yer Maker”) and the other with the psychedelic storytelling of “No Quarter”.

Houses of the Holy comes to a clattering and demonstrative close with the under-appreciated gem “The Ocean”. Page and co. get back to their swaggering rock roots with one of the nastiest guitar riff/drum fill combos in rock history. The song and album end with a riotous crescendo as Plant screams out “Ohhhh, so gooood!” And he is soooo right.

The effort of remastering and reissuing these classic records is led by Jimmy Page, and by examining the offered bonus tracks, it’s easy to trace the stylistic developments that were most important to him. Houses of the Holy represents a significant step forward for Page as a composer and producer. The bonus tracks begin with the “The Song Remains the Same – Guitar Overdub Reference Mix”, which removes the vocal lines and pushes the blend of “lead” guitar lines to the forefront. The isolated guitar helps demonstrate the intricacy and wild joy of Page’s composition.

The most essential and interesting of the bonus tracks is “No Quarter – Rough Mix with JPJ Keyboard Overdubs – No Vocal”. Again, Page’s studio experimentation shines through as his pitch-shifted and compressed guitar sound is easy to identify. But the real champion is John Paul Jones’ electric piano performance. Without Plant’s vocals, the wobbling tone and moments of loose improvisation are lovely to behold. In this context, one can trace the influence of this song through lounge and acid jazz, contemporary rock (“Everything in Its Right Place”, anyone?), and even EDM and dubstep.

While Houses of the Holy was considered a success upon initial release, it has never borne the same cache as its numbered forebearers. The remastering of this album is a blessing to the careful compositions and mannered performances throughout the record. It is time Houses of the Holy take its proud place among the other achievements of 1970s rock.

Essential Tracks: “The Song Remains the Same”, “Over the Hills and Far Away”, and “No Quarter – Rough Mix with JPJ Keyboard Overdubs – No Vocal”