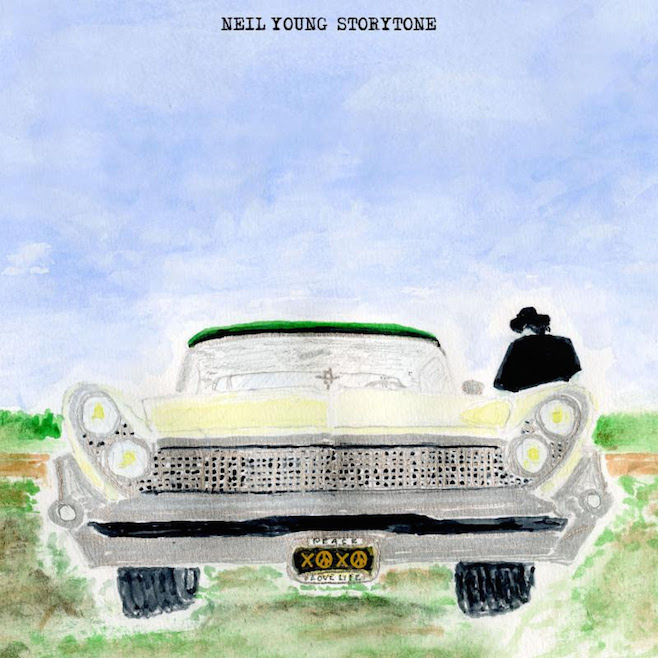 “Tone” is the key word in the title of Neil Young’s latest studio album, as he’s released it in two tonally opposite formats. With the standard version, you get live orchestral arrangements of 10 new songs, whereas the deluxe edition includes a bonus disc of more stripped-down takes. Same stories, different tones.

The blues number “Like You Used To”, for instance, is full of old-guy swagger when backed by a full brass section. When Young swears that his ex will come running back, there’s no question he’s telling the truth, or rather, accurately predicting the future. But on the bonus disc, the bare-bones combo of harmonica, fuzzed-out guitar, and Young’s quivering autumn branch of a voice tells a different tale. “Some day you’ll see me like you used to,” he whispers. This time, you don’t believe him. Not one bit.

So, if we’re talking about contrast alone, Storytone is one of Young’s more fascinating experiments, with the self-described “acoustic disc” trumping the symphonic one. It makes sense; early Bob Dylan is more in his wheelhouse than Tommy Dorsey will ever be. Besides his inflexibly skeletal vocals being an awkward fit for a full orchestra — his phrasing has a hard time keeping up with the loose, big band swing of “Say Hello to Chicago” — some of his clunky lyrics become even clunkier when taken out of a more hushed, intimate setting. “Who’s Gonna Stand Up?”, his latest environmental protest, begs the listener to “Protect the land from the greed of man” and politicians to “Ban fossil fuel.” Yeah, no shit. Don’t get me wrong. Young actually walks the walk when it comes to environmentalism, but such exhausted statements aren’t likely to spring anyone into action (or even make for a good song) when they’re driven by melodramatic strings that recall a “Beef: It’s what’s for dinner” commercial.

The bonus-disc version is a slight improvement, with just a lone banjo, which makes the word “fracking” sound more like the appalling method of oil and gas extraction it actually is rather than a swear word from Battlestar Galactica. Like the Booker T. & the M.G.’s backed “Let’s Roll”, it’s proof that Young’s politically blunt songs have always worked better with arrangements that dial down the megaphone instead of turning it up. And although it’s nice that his camp bothered to release the alternate versions at all, they’re still only being sold as supplemental tracks to the orchestral material at a slightly higher price ($14.99 versus $10.99 on iTunes), something that needs to be considered when evaluating the work. Sap, sugar, and cheese are Young’s primary musical exports here.

Luckily, Storytone hits a late-game stride with its two final tracks, both of which find the perfect marriage between arrangement, lyric, and Young’s voice. Where opener “Plastic Flowers”, “Glimmer”, and “Tumbleweed” threaten to drown the whole ship in a Busby Berkely pool of harp, French horn, and flutes that clash with the vocals, “When I Watch You Sleeping” and “All Those Dreams” merely use the 92-piece orchestra for flourishes. The latter stays driven by acoustic guitar and twinkling piano, with violins rising every now and then to further sweeten a memory of two lovebirds building a snowman amidst wildlife in the winter. The words’ reliance on concrete imagery prevent them from becoming maudlin, while the tasteful distribution of the strings actually complement Young’s pipes, thus keeping him clear of the schmaltz zone. The tune would fit right in on one of his lovelier pastoral albums like Harvest Moon or Prairie Wind.

Then again, maybe it’s unfair to compare Neil Young’s present to his past. Musically, he’s always done whatever the fuck he’s felt like. But sincerity doesn’t always equal success, and Storytone fares much better in the genre that already plays to his strengths.

Essential Tracks: “Like You Used To (Acoustic)”, “All Those Dreams (Orchestra)”