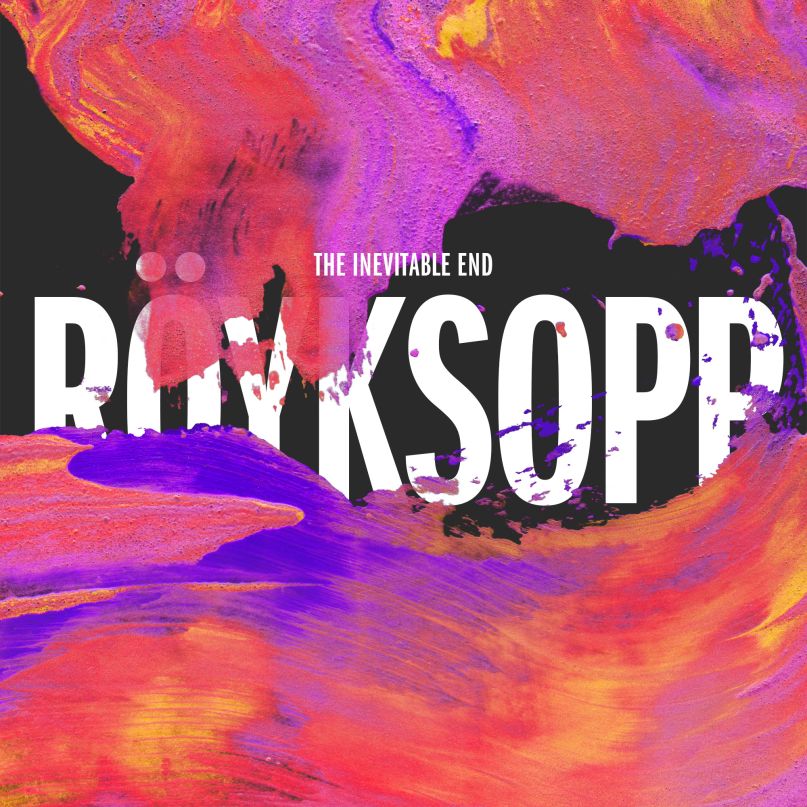 It means something to put on an exit show. It would have been easy enough for Röyksopp to disappear, to let the clock wind down on their 16-year streak and just stop releasing records without so much as a whisper. But the Norwegian duo picked 2014 as the last year they’d commit to the album as a form, announcing The Inevitable End not as a finale to their career but as the last full-length project that Svein Berge and Torbjørn Brundtland would ever complete together. It comes just months after Do It Again, a collaborative EP with Swedish pop star Robyn, that stirred Röyksopp from their four-year hibernation since 2010’s Senior. Coming from an act that’s known mostly for unspooling hours of placid electropop into the world, The Inevitable End kicks off with a surprising dash of megalomania.

“We will make you scream our name forever,” sings a digitally shredded voice on the album’s crunching opener, “Skulls”. Here’s a Röyksopp with an edge they haven’t bared since The Knife’s Karin Dreijer Andersson cranked up the stakes on Junior’s “This Must Be It” back in 2009. “We will be the love you’ve always wanted/ We will be the fire in your blood/ We will be the vice of your desire/ We will be salvation in the flood,” chants that robotic ghost in a biblical invocation on par with The Chemical Brothers’ “We Are the Night”. Whether they’re parroting dictators or cult leaders, Röyksopp have never sounded quite so sure of their power, even though (like on Junior) they open their self-imposed pedestal to a whole roster of collaborators.

The most striking among the album’s guest vocalists is still Robyn, who at this point fits so cleanly into Röyksopp’s icy electronics that she could be a third member. The album retools “Monument”, a jazzy, ten-minute suite from Do It Again, into a rock candy meteor half its original length. Robyn’s vocals explode in glassy shards, given texture and energy beyond what the song’s smoldering original mix allowed. “This will be my monument/ This will be a beacon when I’m gone … So that when the moment comes/ I can say I did it all with love,” she sings. It’s one of the most exciting moments not only on The Inevitable End, but among Röyksopp’s entire catalog.

But this isn’t another Junior, as Röyksopp aren’t here to party their way to the finish. The album’s title marks the final entry in the “studio albums” section of Röyksopp’s discography, sure, but it also indicates the feelings of romantic turmoil that rustle inside. The Inevitable End is a breakup album as clearly as Coldplay’s Ghost Stories was, just without the high-profile celebrity split to lend specific characters to its lyrics.

Actually, Röyksopp helped set the groundwork for the synth-padded sound on Chris Martin’s latest endeavor, and the Scandinavian duo haven’t exactly departed from the elements that have since gone mainstream. “I Had This Thing” plays like a sister song to “A Sky Full of Stars”, the Coldplay single that predictably dominated pop radio with help from Swedish EDM powerhouse Avicii. Röyksopp’s take, though it boasts less arena piano, still pounds out a four-on-the-floor beat and a snaking, fuzzy bass line. Jamie Irrepressible lends more nuance to his guest vocals than Martin, but the refrain of “I never meant to let you go” feels like awfully familiar territory. So does the song’s guitar-flecked loud/quiet dynamic.

Those are the most energetic moments; on the whole, The Inevitable End is an hour more akin to Röyksopp’s downtempo Senior. Most tracks feel swollen with regret, like the nearly eight-minute “You Know I Have to Go”, which never quite moves enough to justify the space it takes up. But even when Röyksopp kick up the BPM, they don’t often venture from a staid, 4/4 backbeat. “Running to the Sea” features lovely guest vocals from Susanne Sundfør, but can’t seem to escape from the revolving door of its repeating piano chords. It’s an upbeat dance track that can’t help but feel sleepy.

If Röyksopp plan on spending the rest of their career cranking out singles like “Monument”, maybe their retirement from the album is for the best. The Inevitable End doesn’t have too much to say that hasn’t already been said either by Röyksopp or their descendants. But when it does hit on something, it screams its lungs dry.