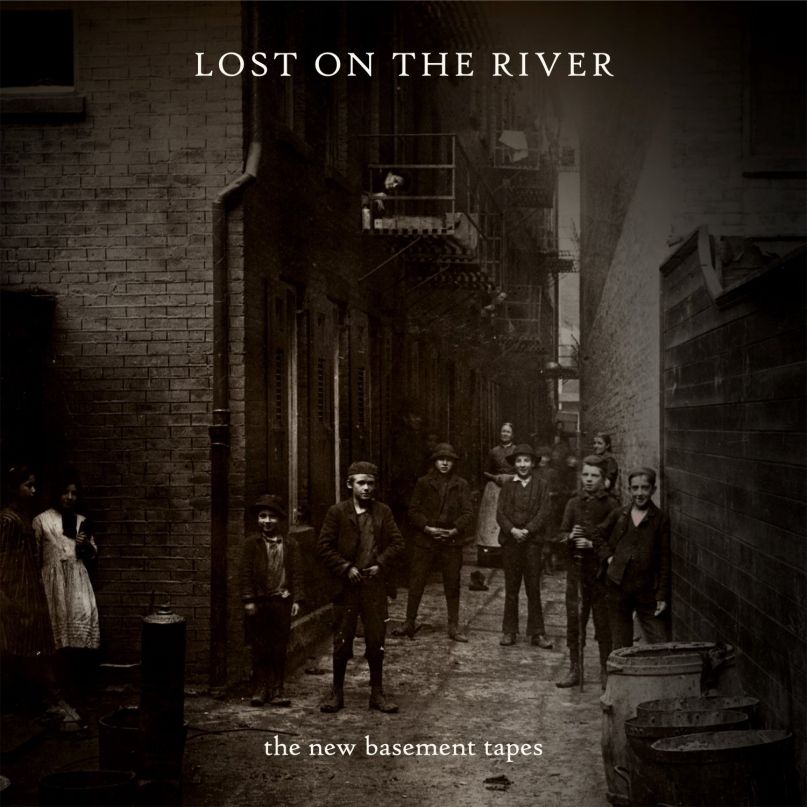 Sonic Highways’ surefire reign as the most ambitious and intriguing major record of the year arguably ended before it even began. So, what did it take to dethrone Dave Grohl and his Foo Fighters’ innovative, eight-city recording and documentary project? Nothing short of Bob Dylan, the “poet laureate of rock and roll,” bequeathing recently discovered lyrics from The Basement Tapes era, the most mythologized recording sessions in rock history, to legendary producer T Bone Burnett and an all-star band comprised of Elvis Costello, Jim James (My Morning Jacket), Marcus Mumford (Mumford & Sons), Taylor Goldsmith (Dawes), and Rhiannon Giddens (Carolina Chocolate Drops). Entire empires have been toppled by far less momentous developments than all these distinct moons aligning.

The New Basement Tapes, the band name assumed by these five songwriters, each of whom took turns composing arrangements for Dylan’s lyrics, speaks more to the notion of reviving the spirit of those storied sessions in the present than adding to their legacy by resurrecting and completing these once abandoned songs. Sure, upon first listen, James’ delivery on opener “Down on the Bottom” may sound vaguely reminiscent of Nashville Skyline-era Dylan. The band swap vocals and instruments throughout the record. And harmonies layer, texture, or flesh out nearly every song. But Lost on the River never allows us to forget that these are five seasoned musicians holing up in their own basement (or, in this case, Capitol Studios). They’re far more engrossed in creating their own unforgettable sessions than merely trying to ape or piggyback off Dylan and The Band. And while no album rollout (even one with a Showtime documentary and late-night appearances) can manufacture the type of curiosity created by years of bootlegging and word of mouth, here the spirit, if not the mystique, of The Basement Tapes sessions lives on.

Like the original Basement Tapes, Lost on the River plays more like a sampler than a carefully sequenced, cohesive album. While this leads to an uneven listen, it also accentuates the group’s range of abilities. On the rallying, guitar-driven “Kansas City”, a weary, lovelorn Mumford sings himself to tears (“And I love you, dear/ But just how long can I keep singing the same old song?”) as the album segues into the almost mystical “Spanish Mary”, on which Giddens’ ethereal, storyteller voice hovers over clopping percussion and her minstrel banjo. Later on, the two finally co-mingle on melancholy train song “The Whistle Is Blowing”, Giddens’ voice descending to waft behind Mumford’s earthy tone before the two rise alongside each other like the pressure building in a locomotive’s steam whistle. Likewise, Costello’s huskier delivery on the glistening, titular guitar ballad only makes Goldsmith’s gliding voice and longing go down all the smoother on the mandolin-accented “Florida Key”.

The New Basement Tapes further distinguish themselves from Dylan and The Band on a handful of tracks that you could never imagine emerging from “Big Pink.” James’ “Nothing to It” swings with a mock horn section and a splash of Motown in the soulful choruses and backing vocals, while his smoky, old-school “Quick Like a Flash” (only found on the deluxe edition) is ready to soundtrack a Tarantino opening credit sequence in the near future. The record’s final emotional pitch comes on the penultimate “Six Months in Kansas City (Liberty Street)”. One of Costello’s cacophonous vocal experiments, the song bashes against itself until it finally breaks out into a belted chorus of the track’s title on repeat, Costello and the female backing vocalists creating a clanging refrain while his bandmates take turns throwing their voices into the melee (an overall cathartic release of near-Joe Cocker proportions).

Burnett and the band have been quick to thank Dylan for his “extraordinary trust, generosity, and support” during their two-week endeavor to transform his recovered lyrics into a finished record. After listening to Lost on the River — the gold, the silver, and even the occasional dirt clod — you get the sense that Dylan’s greatest gift to the band may not have been his lyrics. The real gift may have been giving Burnett and these five musicians an excuse to go and chase down their own Basement Tapes.