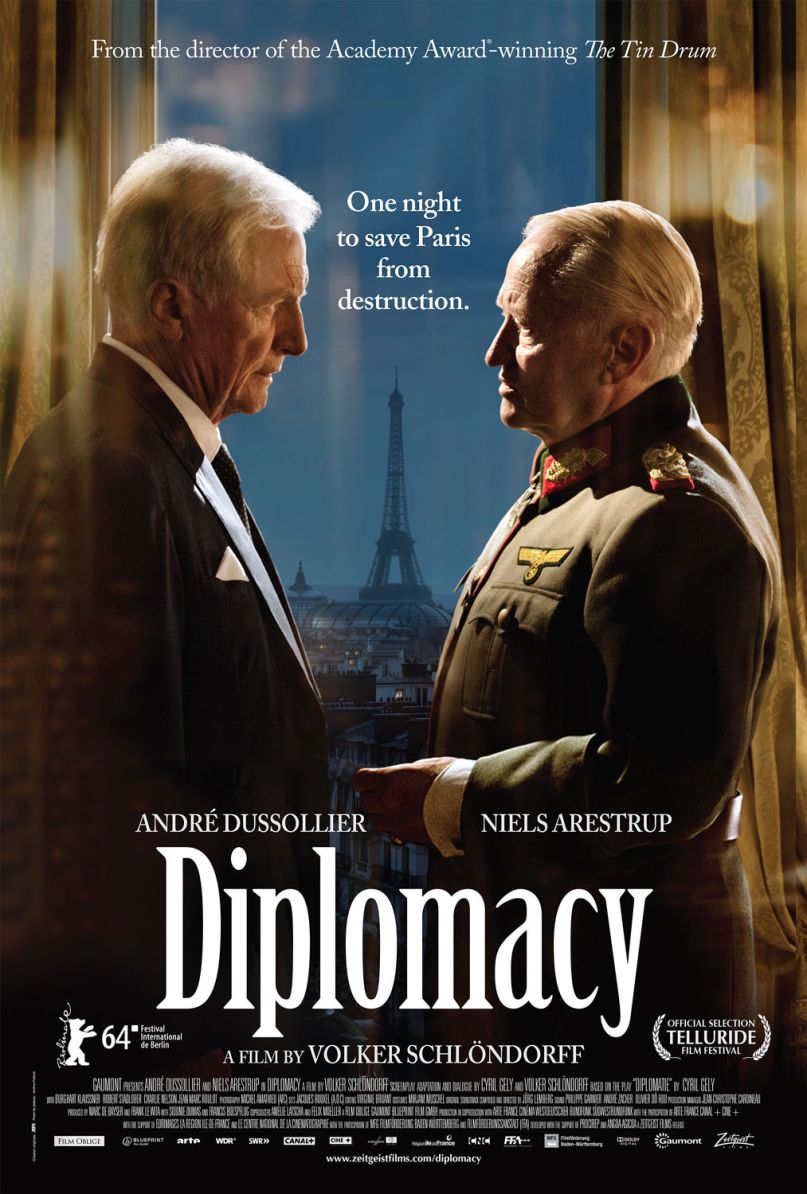 Although the Oscars race is just heating up, Diplomacy has already emerged as a clear front-runner for Best Foreign Language Film of the year. And how could it not, considering that this Franco-German historical drama, adapted from the play Diplomatie by Cyril Gely, is an elegant soufflé of everything that the Academy adores: World War II gravitas, the downfall of the Third Reich, and distinguished gentlemen engaging in cerebral, explosive debates over military stratagem, or lack thereof.

“Although it serves no strategic purpose, Paris must be flattened,” explains one of the Nazi officers (Burghart Klaußner) to his French guide, the stunned Monsieur Lanvin (Jean-Marc Roulot). You see, the Paris Opera House was one of Hitler’s favorite attractions — he circled it twice on his 1940 tour of the city, fawning over its beauty — and his dream was to make Berlin even more resplendent than the ville lumière he held in such high esteem. But when Berlin, Hamburg, and Dresden were bombed by the Allied forces, Hitler ordered that all of the Parisian landmarks, “especially the Opera,” be reduced to steaming piles of rubble as well.

On August 25, 1944, the Allies were closing in, and the Führer was determined to burn Paris to the ground before his enemies could liberate it. The story of that fateful day, co-written for the screen by Gely and Schlöndorff, takes place almost entirely inside the grand Hotel Meurice, then Nazi headquarters in occupied Paris, and centers on the relationship between German military governor Dietrich von Choltitz (Niels Arestrupt, The Diving Bell and the Butterfly) and Swedish consul-general Raoul Nordling (André Dussollier, Amélie). The goal of the impassioned, diplomatic Nordling is to dissuade von Choltitz from blowing up the city, while von Choltitz, gruff and uncompromising, is dubious of Nordling’s intentions, and wonders if he might be a spy.

Their verbal sparring is Diplomacy’s pièce de résistance, and these two, relishing a dexterous chess game of a script, are extraordinary. At one point, Nordling compares von Choltitz to Abraham, who was all too ready to sacrifice his son Isaac at God’s behest. Nordling then asks von Choltitz if he would slaughter his four-month-old son should Hitler give the order. At first, Von Choltitz scoffs at being compared to “a Jew,” then reveals that Hitler, by a new decree, will have his wife and children killed if he refuses to carry out the mission. “What kind of father would that make me then?” he ripostes. “Tell me, what would you do in my shoes?”

When addressing his men, von Choltitz speaks German, but with the Paris-born and -raised Nordling, he speaks French. There is a reason for this, and also for every pregnant pause and aspect of their blocking, down to a step backwards or forwards, all holding a specific meaning and weight.

Films adapted from stage plays tend to share this kind of unique, dialogue-driven potency – think of the deliberate and highly effective staging in Doubt, Rabbit Hole, and Glengarry Glenross, for example – but, by the same token, can make for some uncomfortably stiff and stagnant translations at times. While an emphasis on “action” is not always required to make a live performance compelling, inertia, especially the kind brought on by characters just sitting in a room and talking for extended periods, can be a kiss of death on celluloid.

But somehow, despite taking place in one lavish hotel suite for most of its 88-minute runtime, Diplomacy induces pins and needles from the get-go and doesn’t let up until the credits roll. The budget outside of the central location is noticeably small — shoddy black-and-white newsreel footage is cut in to show the Allied forces pushing through with tanks and gunfire, instead of being reenacted — but the outside world is not the focus, anyway.

Hearing von Choltitz describe Hitler going mad in vivid, chilling detail is better than actually seeing it, and watching Nordling hover over a pill bottle in one crucial moment is more of a jolt than any of the sporadic gunshots popping beyond their claustrophobic four walls. This is not only a testament to the livewire script but also to the veracity of the acting and Schlöndorff’s direction, which is even more inspired in afterthought. To make even a dip into the liquor cabinet fraught with tension, lingering a bit too long on Nordling with his back turned, shows not only a flair for the Hitchcockian, but also for that rare element of surprise that biopics so seldom achieve.

As is the case with many a historically accurate work, we know, at least in broad strokes, how the story will end. The Opera, the Louvre, the Arc de Triomphe, and the Eiffel Tower, among other irreplaceable landmarks, remain intact. Paris was liberated by the Allies; the Nazis surrendered; “the good guys” won.

But to know more about the fates of our leads would spoil the truly harrowing experience that Diplomacy still manages to deliver; so, I would advise against it. Going in cold is ideal, because, after all, just basking in the glow of these actors’ performances is enough to elicit the best kind of goosebumps.