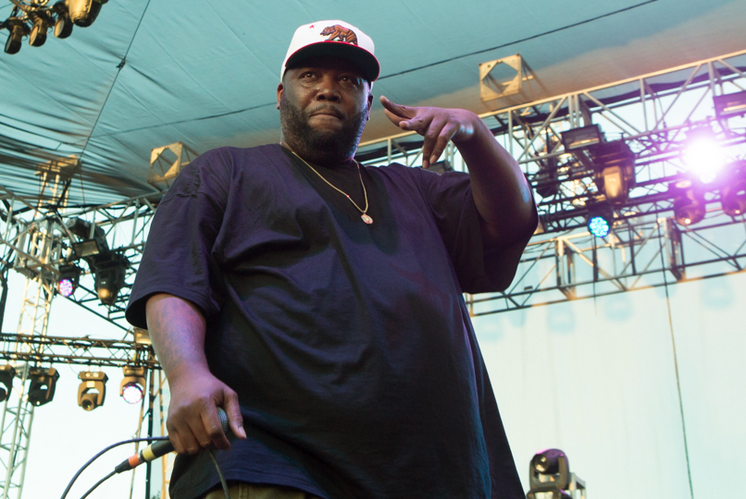 Last night, a grand jury in Ferguson, Missouri failed to indict police officer Darren Wilson in the August 9th, 2014 killing of Michael Brown, an unarmed 18-year-old black man. The controversial decision has sparked public outcry across the country, as millions of Americans have taken to the streets to protest.

Killer Mike, one-half of Run the Jewels, has been one of the most constant and articulate voices throughout the unrest in Ferguson. He’s written op-eds and appeared on cable news networks to call for peace even as police continually lose the trust of the people.

As fate would have it, Run the Jewels had a show scheduled mere miles from Ferguson in St. Louis last night. Upon hearing the news that Wilson would not be charged, Mike hit the stage for an emotional pre-show speech. Watch it in full below; you can also find a full transcription.

I would like to say Rest in Peace to Michael Brown. I would like to give all thoughts and prayers to the people out there peacefully protesting. I also give thoughts and prayers to the people who could not hold their anger in because riots are only the language of the unhold. We usually come on to Queen’s ‘Champion’, but I just got to tell you today, no matter how much we do it, no matter how much we get shit together, shit comes along and kicks you on your ass. Tonight, I got kicked on my ass when I heard that prosector. You motherfuckers got me today, I knew it was coming when Eric Holder decided to resign. You motherfuckers got me today. You kicked me on my ass today, because I have a 20-year-old son and a 12-year-old son, and I’m so afraid for them today.

When I stood on the bus, and I cried, and I hugged my friend, I said, ‘these motherfuckers got me today.’ When I stood in front of my wife, and I cried like a baby, I said, ‘these motherfuckers got me today. You motherfuckers will not own tomorrow, we will not bend to your fear, we will not accept your pain, we are not going to keep playing that race card, because we know you don’t value my skin. We know you do value his (El-P), but we’re friends and nothing is going to devalue that.

There was no peace in my heart and I wanted to walk out to ‘Burn This Motherfucker Down’. But I got to tell you, I’m from Atlanta, Georgia, something said, ‘Just look for something [Martin Luther King Jr.] might have said,’ so I googled Martin King and Wikipedia popped up, and he was 39 years old when you motherfuckers killed him. He was the same age as I am, the same age as [El-P]. He was a young man when you killed him.