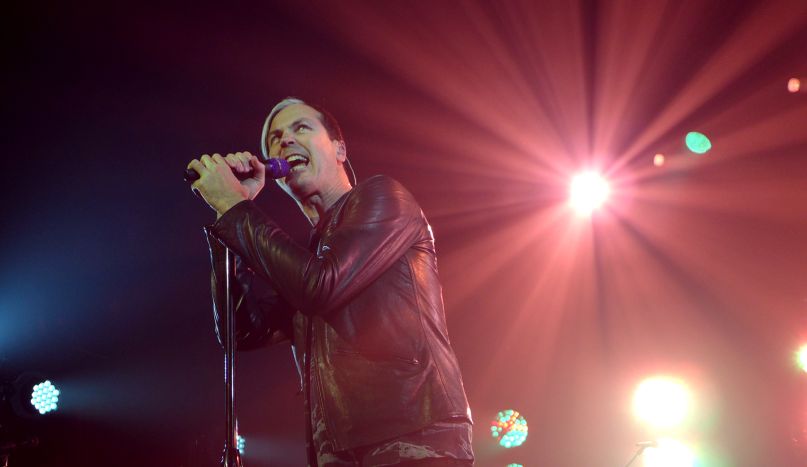 Just before they played the Riv, Fitz & the Tantrums waited for a giant LED heart to light up at the center of the stage, its red bulbs snaking back and forth from the bottom. The same shape was printed on the white, plastic bracelets staff handed out in the lobby of the venue, bracelets emblazoned with the band’s name that flashed white if you shook them. Throw one on, and your wrist became a point of light in a whole constellation on the Riv’s main floor.

After a set from Big Data, who passed out their own accessories in the form of masks that looked like their bearded, bespectacled logo, Michael Fitzpatrick and his Tantrums took the stage. Most bands are lucky to find a singer confident enough to perform without a guitar strapped on like a shield, but Fitz & the Tantrums have two: their namesake and his co-powerhouse, Nicole Scaggs. Good luck finding a duo more present and alive onstage. These two had an instant rapport with their audience at the sold-out Saturday night show. They’d reach out over the crowd, who reached back in droves. They held out their microphones after prompting them to sing along.

It was a packed house, and even attendees seated upstairs in the balcony found themselves dancing to the band’s hits “Don’t Gotta Work It Out”, “Breakin’ the Chains of Love”, and the rollicking, chart-topping “Out of My League”. A cover of the Eurythmics’ “Sweet Dreams (Are Made of This)” boiled into a frenzied soul breakdown complete with saxophone solos, a rendition cast far from its early ’80s new wave origins. This was only the first of the Tantrums’ two sold-out nights in Chicago — it’s a good thing they don’t ever seem to get tired.

The first song of the band’s encore, “MoneyGrabber”, boomed enormous over the crowd. It’s a song that deserves the biggest arena it can find, and Fitzpatrick and Scaggs sent it flying. “Chicago, y’all got to make the most noise ever. Show the East Coast and the West Coast how you do it,” urged Fitzpatrick before the single’s intro crashed in. People cheered and pumped their fists, sprinkling white light across the room. The heart on the stage beamed back in technicolor.

Setlist:
Get Away
Don’t Gotta Work It Out
Break the Walls
Breakin’ the Chains of Love
Keepin’ Our Eyes Out
Spark
MerryGoRound
Sweet Dreams (Are Made of This) (Eurythmics cover)
Out of My League
House on Fire
Fools Gold
Last Raindrop
6AM
Tell Me What Ya Here For
L.O.V.
Encore:
MoneyGrabber
The Walker