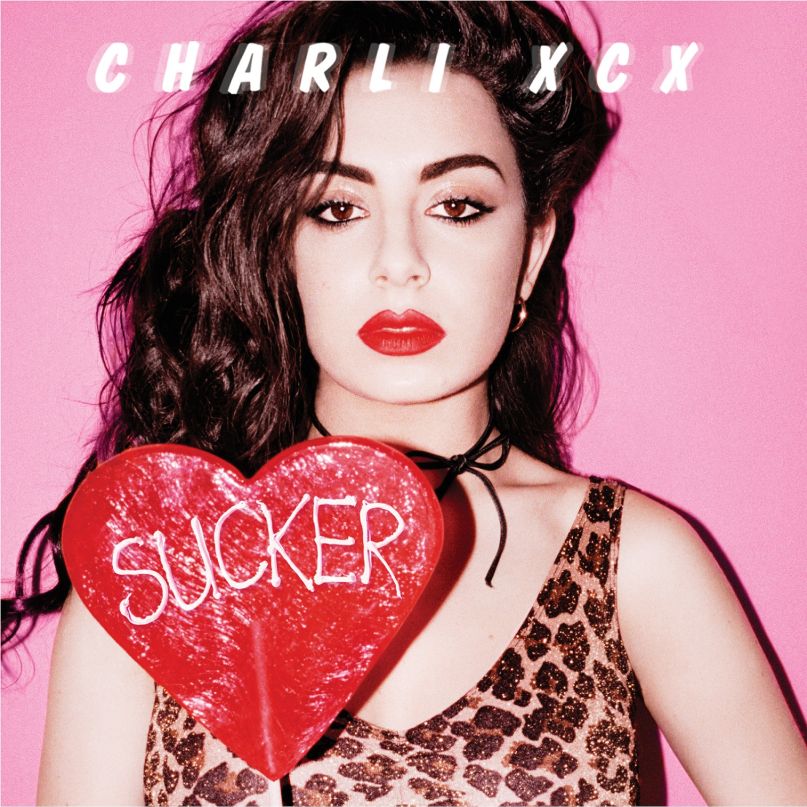 Charli XCX, the moniker for 22-year-old Charlotte Aitchison, has been a common thread in pop music for quite some time. The British electropop singer-songwriter was more than an extra voice on Icona Pop’s “I Love It” and Iggy Azalea’s “Fancy” — she helped pen them. Now, on her sophomore album, Sucker, she’s successfully roping punk into pop and laughing her way to the top.

Charli XCX’s choice to present her songs through the traditional band setup — vocalist, guitarist, bassist, and drummer — is a curious thing for pop. There’s a whole bag of synth and whistle snippets running behind her as she sings, but they don’t fluff things up the way Katy Perry’s songs bubble or Sky Ferreira’s drift off. The guitar brings things along so that her songs kick with a punky twist. It’s why “Famous” winds up sounding like Aitchison is singing over a Peter Bjorn and John track. That guitar is what gets even the most defiant pop lovers to move. She’s in charge, and no contradicting opinion can convince her to step down.

That doesn’t make Charli XCX special, necessarily. Taylor Swift came in swinging hard this year, and Nicki Minaj was throwing uppercuts. Women in pop were self-assured, dominant, and daring. They called their shots exactly the way they wanted them done, flaunting an unrivaled stamina that, while impressive, shouldn’t come as a shock. Aitchison’s fevered attitude, however, supports her inclusion of punk rock in pop, and that fearless decision pays off on Sucker. She makes herself another option for women old and young to look up to this year, because if there’s anything we’ve learned in 2014, it’s that for some reason, feminism is viewed as a “trend,” and unapologetic self-confidence in one’s abilities should not be as uncommon as it unfortunately is.

Her unflinching confidence is present right from the get-go on the opening song, “Sucker”. With every yell of “Fuck you, sucker!” in the chorus, Aitchison is sharpening her fangs for a charming introduction. With that, Sucker sets itself up for high-powered dance riots. There are the coy hooks of “London Queen” and sugar coma of “Breaking Up”. She emphasizes the repetition of staccato choruses, particularly on radio hit “Boom Clap”, addressing breakups and endless crushes with empowerment that dodges cliché. Then there’s the anthemic chants of “I don’t want to go to school” in “Break the Rules”. They’re printed over an extended crescendo in the bridge, which acts as a prolonged drum roll, allowing a release of emotion in the chorus similar to running out of your high school’s double doors on the last day of class, crossing that divide between the freedom of summer and the confines of a higher establishment.

As a whole, pop is hard to acknowledge as a difficult art form because of its simplicity and often limp lyrics. As fun as “Break the Rules” is, its chorus about ditching school to get high and dance at the discotheque makes it passable as a slice of teenage cheese (partly in thanks to an elementary music video). Charli XCX goes for barebones lyrics in favor of more varied musical layers. That maturity is what makes pop more brainy than every dismissive “I could have done that” implies. As Aitchison should know, though, pop typically leads to immediate pleasure, but finding a balance between both music and lyrics is very much possible.

Along comes the importance of self-awareness. There’s no mistaking her flat lines for a dull tongue. It offers pop fiends a more versatile experience beyond her singles. Aitchison recorded several dozen punk songs in Stockholm between 2013’s True Romance and Sucker, a break that cleared her pallet to engage in pop again. The value of free-flowing thoughts served as a reminder that the core of both genres is emotion. Lady Gaga got raucous with spirited energy just as The Ramones did, and neither one expected their singles to be taken without a grain of salt.

Like Debbie Harry, Joan Jett, and Gwen Stefani before her, Charli XCX doesn’t use her undeniable personality as a theme to override her music. Sucker is the sound of her stepping away from the pop star title. She teases the celebrity lifestyle on “Gold Coins” and jabs at Weezer’s “Beverly Hills” on “Hanging Around” (actually co-written by Rivers Cuomo). She’s critiquing her peers while dancing at the same party, and when she leaves the room to smoke outside, every cigarette she lights glows with malevolence. If it weren’t for the sugar in her clouds of smoke, then her bitter tone would smell of misconstrued intentions. She’s asking her fellow stars to laugh at their saccharine getup, stomping on the very themes of romance her own album strips apart.

By the time closer “Need Ur Luv” comes around, it’s hard to stop listening. The ’60s pop number glimmers with a sunny bounce and infectious piano chords. Even as the lyrics contradict with dark relationship complications, it shows the adventure of a young savant. Charli XCX doesn’t want to be the world’s next pop star (although that very well may happen). She’s looking to redefine the industry. She’s throwing synthpop down with a slap of ambitious rock and power chords. Sucker is an “I told you so” middle finger that won’t budge, marking itself as proof that punk deserves its place in pop, that call-and-response lyrics aren’t always cheap, and that there’s nothing shocking about a young, female artist emerging with another condensed, polished album.