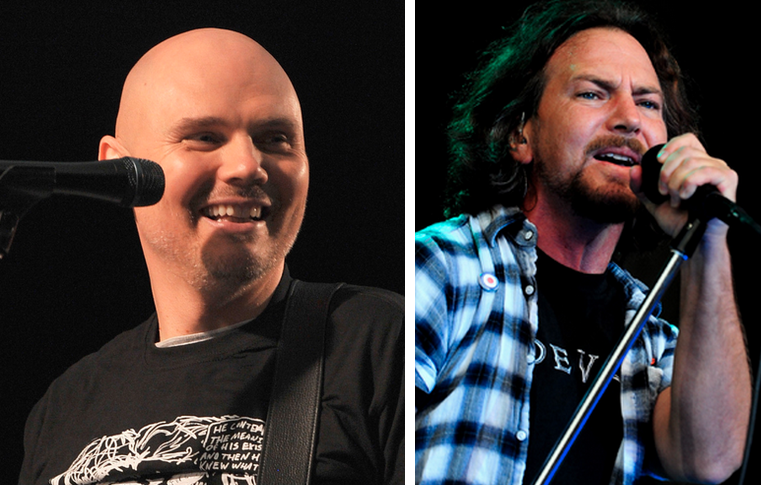 During an interview on the Howard Stern Show Tuesday morning, Billy Corgan threw more shade at fellow rock titans Pearl Jam, and also had some words for Foo Fighters (via Alternative Nation).

If you recall, the Smashing Pumpkins frontman recently gave an interview to UK’s The Independent in which he declared himself and Kurt Cobain as alt rock’s “top two scribes”, adding that “everybody else was a distant third.” (That same interview also saw him mock Pearl Jam’s Eddie Vedder over comments he made about feeling survivor’s guilt in the wake of Cobain’s death.)

Corgan maintained that stance during his appearance on Howard. When asked where that leaves Pearl Jam, he responded, “Not even close,” agreeing with Howard’s assessment that their music is “derivative.” Corgan continued:

If you listen to the band’s work, and I know they have a tremendous fanbase and they should, they’re a great band but you know, I’m a Beatles guy, a Stones guy and a Kinks but if you go to a lot of those other bands they just don’t have the work…

I just don’t think Pearl Jam have the songs. If you stack my songs up, Cobain’s songs up and that band’s songs up, they don’t have the songs. They’re a great band, still an arena act, they’ve gotten it done for a long time and I have to bow to that.

Corgan said “it’s a mystery to me” how Pearl Jam has maintained its arena status, “because I just don’t get it.” He continued, “They don’t have the songs. People will take that the wrong way but speaking competitively, they are my competitors and I have to say who am I competing against and why.”

Meanwhile, in regards to Foo Fighters, Corgan said he’s “not particularly thrilled” by the band’s lack of evolution.

Dave [Grohl] is a great musician, a great songwriter and has done the work but to me, my criticism of the Foo Fighters, if I’m being a music critic, is that they just haven’t evolved and that’s sort of the recent wrap on them is, you know, making the same music.

Obviously, I’ve put my whole life on the line for making different types music as I’ve gone along. We’ve talked last time I was here about playing old songs, evolving and it’s just my mentality. I know it’s not for everybody. Listen, [Dave’s] getting it done so it’s like, if you want to be competitive, my philosophy against his, he’s the one winning.”