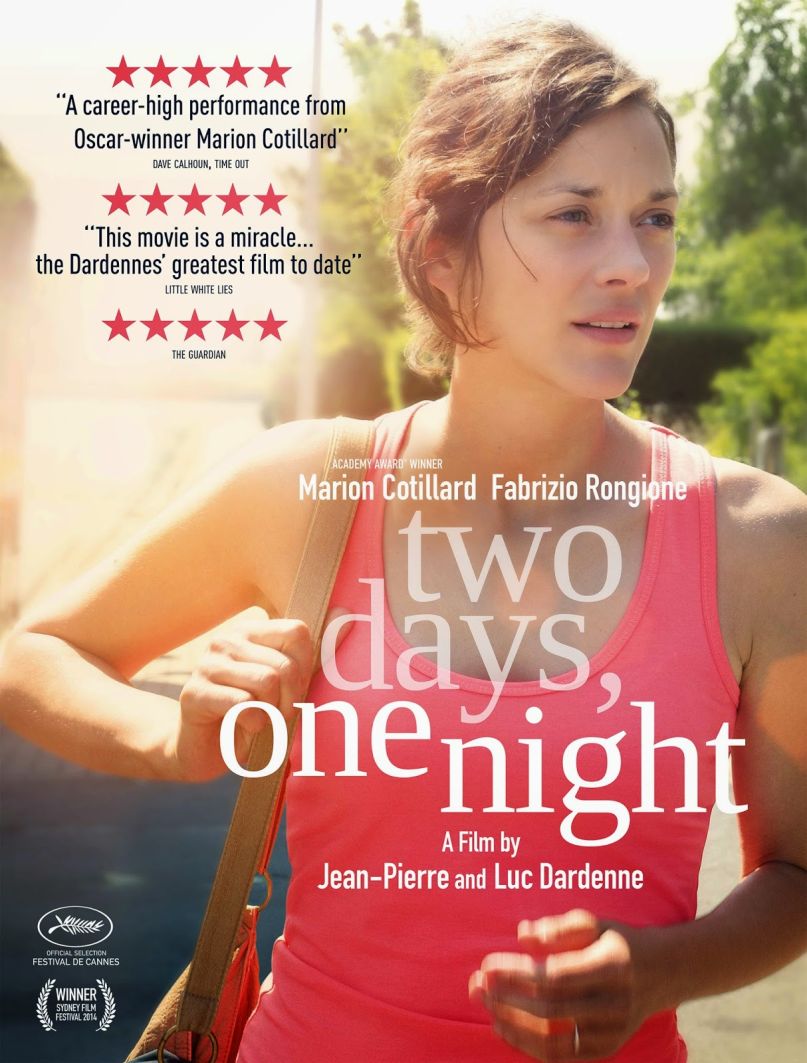 Depression may feel endless, but it’s never constant. It comes and goes in torturous peaks and valleys, often triggered by external influences beyond anyone’s control. We laugh, we cry; we scream, we whisper — it’s a process. On a long enough timeline, the illness may become a safety net — or a form of seclusion — offering sanctity and solitude because, after all, that’s what has become the norm. If anything of this rings a bell, it should; everyone battles with depression at one point or another. Whether it’s conquered or contained, however, is how the lines are typically drawn.

With Two Days, One Night, two-time Palme d’Or winners Luc Dardenne and Jean-Pierre Dardenne turn their camera on Oscar-winner Marion Cotillard for a swift 95-minute portrait of the pitfalls and struggles of depression.

Set in the industrial Belgium town of Leige, the story follows a young mother and wife named Sandra (Cotillard), who has suffered a nervous breakdown, forcing her to take a leave of absence from her work at a small solar panel factory. Upon her return, however, she discovers her job has been left in the hands of her 16 colleagues. Together, they will vote on whether they keep her on board or cover her workload and receive a €1,000 bonus. As the title suggests, the very fragile Sandra has a weekend to personally plead her case to each one of them.

The Dardennes never let up on Cotillard, keeping a close watch on her at every moment. There must be, maybe, 10-15 seconds where she’s not on screen, which makes Two Days, One Night an incredibly intense character study. The film demands so much from the French actress, and, as expected, she delivers with a performance that transcends her past work (not exactly an easy task), solidifying her talents as both rare and sublime. She’s a nervous wreck from beginning to end, but everything about her translates so real, from the tragedy in her eyes to her uncomfortable, shuddering frailty.

The entire film rests on her shoulders, down to the medium itself. The majority of the story is spent following Sandra as she goes door to door, essentially begging for their vote come Monday morning. It’s humiliating and incredibly demeaning, but there’s a certain nobility that Cotillard injects into the character. She understands these actions are necessary, and as the story evolves, she soon realizes that she’s not alone in her struggles. Her 16 other colleagues also have their own dilemmas to grapple with, and it’s this realization that adds a curious sacrificial element into the picture. At the end of the weekend, someone’s going to be a martyr.

Sacrifice, though, can be quite tactical. Late into the third act of the film, one of Sandra’s colleagues leaves her husband after he’s unwilling to let her forgo the bonus. “I’ve never decided anything for myself before,” she admits. While this may seem like an altruistic move, it’s not. She’s shifted from something she once valued (her marriage) for something more important or worthy (her independence). Sandra experiences a similar decision by the film’s conclusion, and it’s that choice which makes her torturous weekend all the more vital and memorable. Even better, it contends with her depression in a unique way.

Moments are worth appreciating in a state of duress, and Two Days, One Night is full of them. When Cotillard sneaks in a smile or sings “Gloria”, it’s like biting into dark chocolate. When she reaches for her Xanax or hides behind a car to sob, it’s like a cold shower during a polar vortex. A lot of that is to be credited to Cotillard, no doubt, but the Dardennes really don’t pull away and the end result is an intense and intimate experience that’s relentless in its warmth and chills. To date, depression has never felt so delicate and hypnotic on film.