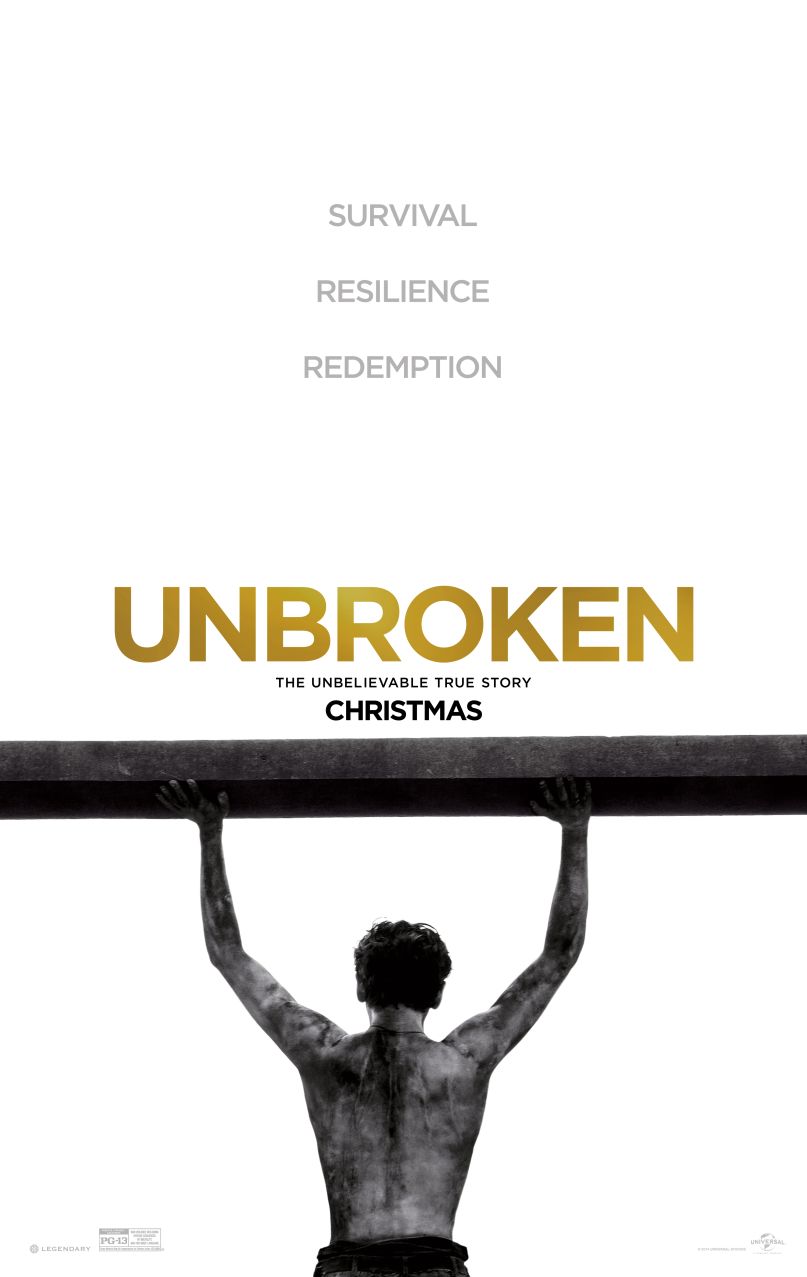 Angelina Jolie’s Unbroken was a true labor of love for the relatively new filmmaker. The story of Louis “Louie” Zamperini is one of extraordinary settings — a movie in the making dating back to the 1950s. It wasn’t until Seabiscuit author Laura Hillenbrand’s biography on Zamperini with the same name was released in 2010 that the idea of a film adaptation started to gain traction in Hollywood. Jolie fell in love with the story as much as the countless thousands who read it had, and set about hiring a most enviable crew featuring writers Joel and Ethan Coen and their longtime cinematographer, Roger Deakin, as well as composer Alexandre Desplat (most recently the engaging score to The Grand Budapest Hotel).

With a story so strong and a crew so experienced, what could possibly go wrong? While Zamperini’s first-hand accounts work beautifully and effectively in the written biography, something gets lost in the translation from book-to-screen. Unbroken is a beautiful-looking film, but too beautiful. It’s well-directed, but too directed. These are strange complaints to be sure, but bear with me. Unbroken is a brutal tale that is ultimately done in by Oscar-bait, intentional or otherwise.

The movie’s first half-hour alternates between Louie (Jack O’Connell) serving as a bombardier in World War II and his life leading up to that point. We see little Louie as a wild child — thieving, drinking, smoking, and getting into fights. His brother takes him under his wing and encourages Louie to take up track, which leads to success as a high school athlete and ultimately a trip to the 1936 Berlin Olympics where he doesn’t medal, but performs well. A great but familiar story up to this point, but the most amazing moments of this first act come via Jai Courtney (A Good Day to Die Hard, the upcoming Terminator: Genysis), who is extremely likable as the co-pilot in Louie’s crew. Who knew?

The most effective moments of the film come in its second act, where we find Louie and two crewmates (one of whom is played by future Star Wars superstar Domhnall Gleeson), stranded on a life raft after their plane crashes, adrift in an unforgiving ocean. Not only is there little food and water, they have to contend with sharks. The first shot of a shark slowly swimming underneath the life raft without any music or even a reaction from the characters is arguably the most unnerving moment of the film. Unbroken is at its best during these moments of subtlety.

After nearly two months, the survivors are finally rescued … by the Japanese. In the years that follow, Zamperini has to not only contend with the poor conditions of the illegal prison camps, he must deal with constant torture both psychological and physical by a camp commander nicknamed “The Bird” (played by Japanese rock star Miyavi). How he overcomes this and the previous trials earn Zamperini the title of the film.

You may be saying to yourself, “Sounds like a five-star review, so what gives?” For starters, it’s too studio. From Louie’s depression-era hometown to the prison camps, nearly everything feels as though it’s being performed on a big stage. Deakin’s cinematography is a double-edged sword: setting up beautiful shots of soldiers’ silhouettes against a fire-red sky, but too often creating the illusion of a war-torn environment that appears too clean. As to what exactly the Coen brothers contributed here remains to be seen. Their stamp isn’t anywhere near this picture.

However, the performances are delivered in commendable fashion. O’Connell plays Louie as a tough, resilient man, but in a different way from his performance in Starred Up. Here he fights for the most part in silence as opposed to unbridled rage, winning by not losing. Garrett Hedlund is also good in a supporting role as prison camp big brother Fitz, never going too big with the performance even as Desplat’s score manipulates in the background.

Despite the unquestionable dire straits Louie finds himself in within the movie, the only moment where I felt the sting of tears approaching was during actual footage of an old Louie racing in the streets. It’s in this minute of total authenticity that we’re reminded of the life Louie led, sans melodramatic score and Rockwell-ian camera lenses. Had Jolie made a feature-length documentary, she could have created something truly memorable. Instead, we’re left with Unbroken as an average tribute to an extraordinary man.

Previous Story
The So So Glos cover The Kinks’ “Father Christmas” — listen
Next Story
The Slow Decay of the English Language as Illustrated by the Titles of No. 1 Singles
Popular
More Stories
[fu-upload-form form_layout="media" title="Submit Your Photo"][input type="hidden" name="ugc" value="1"][/fu-upload-form]