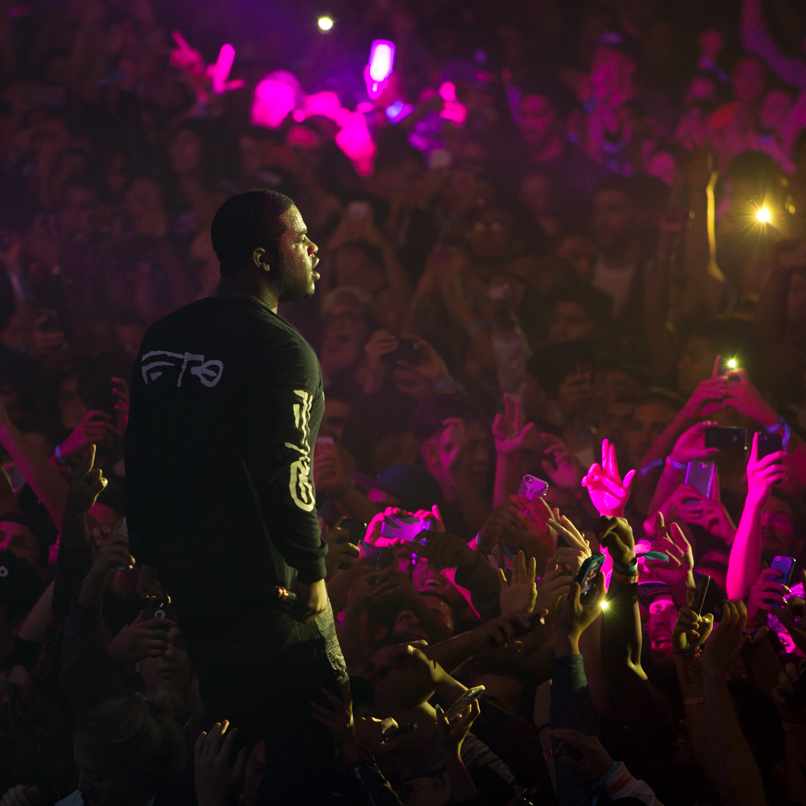 30 Days in L.A. That’s what Red Bull Sound Select dubbed their promotion that brought 30 concerts over 30 days to 30 SoCal venues. We were at the first one and had some issues. 30 days later was a good time to check back in and see how the whole thing turned out.

Not that the ASAP Mob sold-out event at the Hollywood Palladium on Sunday night needed a reason beyond being a killer show to cover. The New York rap crew presented fans with a spectacle that existed in a separate realm from the 30 Days in L.A. narrative. Over 75 minutes of music, the five rappers of the crew incited a near riot, with the night ending by Ferg getting swallowed up by the audience and losing a shoe, only to emerge at the rail and send people off with the request, “Everyone turn to the person next to you, and make sure they are okay.” The group’s west coast equivalent, Odd Future, would be unlikely to end the show on a similar note.

Besides the courteous nature of the mob (“We had a wonderful evening,” ASAP Rocky would say, with Ferg responding, “I don’t wanna go back to New York. I want to stay in Cali.”), the night was notable for the desire to make the concert an event. The show was the largest in capacity of the whole Red Bull series and saw the first 200 people in the door get custom ASAP hats. Promised special guests came through in a big way, with Sleigh Bells’ Alexis Krauss performing with opener Tink for “That Did It” and none other than Drake jumping out to rap with the headliners to his verse of ILoveMakonnen’s “Tuesday”. (Talk about repping his own team, right?) If you’ve never been in a building for an unannounced Drake appearance, words can’t adequately describe it. There is a small period of disbelief, followed by shock, followed by people completely losing their minds and bathing in the afterglow until the music stops playing for good. Short of Kanye, it’s about as good as special guests get.

This was the climax of a guest-heavy event series that saw Lil Wayne show up at the Juicy J show and Rivers Cuomo jam with Real Estate. When the dust settles from Red Bull’s month-long Los Angeles venture, these are the moments that will be remembered. Fans experienced these one-off sets for the price of going to the movies, and Red Bull managed to put on shows that didn’t come across like just another night on the tour. It’s as if the artists owed the crowd a memory.

Still, as good as the guests were, the lasting impression of A$AP Mob is the crowd losing their shit to “Shabba” and the night’s big finish, “Multiply”. Circle pits could be seen in multiple spots on the venue floor, while Rocky’s big grin told the story of the onstage feeling. A lot of people shared that kind of smile over the past month, and in the end, we have the artists and Red Bull Sound Select to thank.