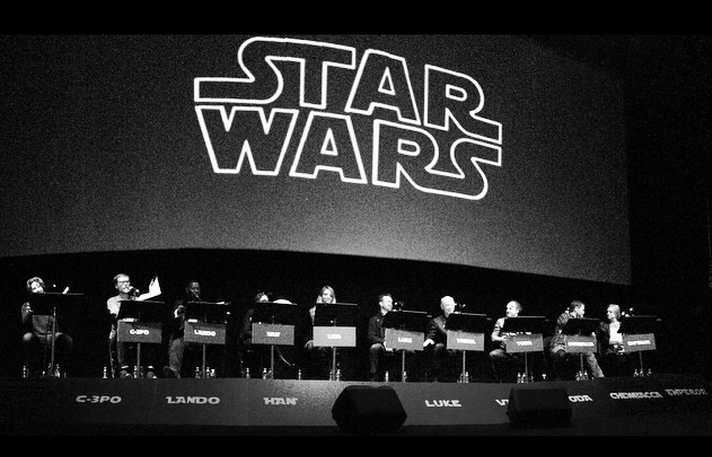 As previously reported, Jason Reitman organized a one-night only live reading of Star Wars: The Empire Strikes Back featuring Aaron Paul as Luke Skywalker, J.K. Simmons as Darth Vader, Stephen Merchant as CP30, Dennis Haysbert as Lando Calrissian, and Kevin Pollak as Yoda. It all went down at the Los Angeles’ Ace Hotel and we have some photos from the event (via Uproxx).

Other cast members included Rainn Wilson as Chewbacca, Reitman as R2-D2, Ellen Page as Han Solo, Jessica Alba as Princess Leia, and Luke Skywalker himself, Mark Hamill, was pulled into the Dark Side as Emperor Palpatine and Obi-Wan Kenobi.

Uproxx highlights a particularly noteworthy moment in the reading:

Our favorite part came from an inspired bit of casting. Ellen Page played Han Solo to Jessica Alba’s Princess Leia, which led to arguably the best scene of the night, the “I love you / I know” exchange. When Reitman reads the stage directions about them kissing, one audience member shouted what we were all thinking…

… Another great moment came from Jason Reitman’s reaction to some of the other stage directions: Han Solo is in one scene described as “kiss[ing Leia] with slow, hot lips.” Reitman interjected, “Oh, George.”

It’s unclear if any video or audio from last night will be released, but fingers crossed. In the meantime, check out a few candid photos below.