The Interview: It’s Not Only a Movie 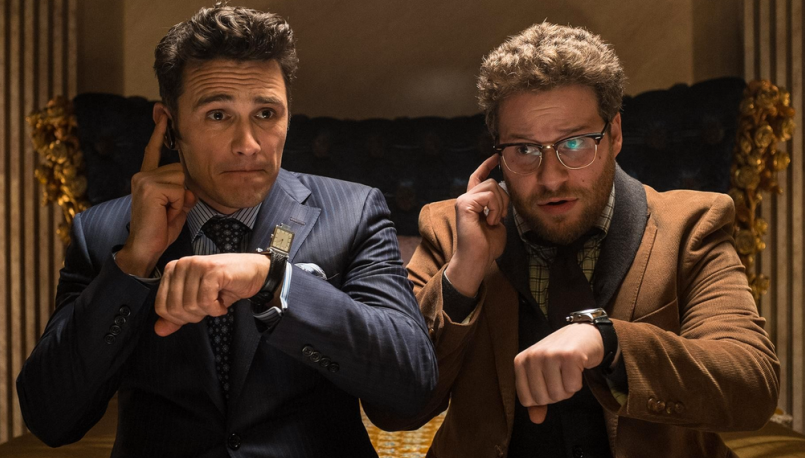 Music, Movies & Moods is a monthly, free-form column in which Matt Melis (@MistaMelis) explores the cracks between where art and daily life meet. Recent columns have delved into the Ferguson aftermath and Robin Williams’ suicide.

As children, these are self-fortifying words or parental succor that allow us to climb out from under our theater seats and finish a film with relative certainty that Jafar, The Wicked Witch of the West, or Michael Myers (or even Mike Myers) won’t be lurking beneath our beds when we return home. As adults, they signify the escapism that occurs when we step from lush lobby carpets to sticky theater aisles — a break from reality that enables us to, among other things, secretly root for antiheroes and villains; tag along on bloody revenge fantasies; and delightfully indulge in humor, shtick, and offenses to good taste that should be miles beneath us. And should these four words ever fall short as allies, we always have the option to walk out. Or we can throw a tantrum, dump popcorn on the floor, and ruin the movie for everyone. Guess which one North Korea opts for.

The sensitive hermit republic’s latest hissy fit was ostensibly thrown in response to Sony’s plans to release The Interview, a lowbrow comedy in which feckless television personalities (James Franco and Seth Rogan) are deployed on a top-secret mission to assassinate “nachos” supreme leader Kim Jong-un. (Potential future spoiler: mission accomplished!) The FBI has now confirmed that Pyongyang indeed sponsored this month’s retaliatory cyber attacks on the Sony Pictures Entertainment computer network. And earlier this week, following threats of terrorism at the film’s New York City premiere (with references to 9/11) and during the wider American release, large theater chains opted out of carrying the movie, which led Sony to cancel the film’s release entirely.

It’s all resulted in a strange few weeks for moviegoers and pop-culture junkies. Nearly all of us have derived some level of voyeuristic pleasure from watching an entertainment behemoth squirm as industry secrets, damning high-level correspondence, and even full-length upcoming releases have been leaked for the entire online world to see. Most of us have conveniently ignored that a massive act of cyber terrorism has been perpetrated: privacy invaded, property stolen, and other ramifications pending. And until a few days ago, it’s been relatively easy to cop that seemingly innocuous attitude of shrugging off the Annie remake being inflicted on the movie-going public a few days early or discovering that studio executives don’t think much of Will Smith’s children, Jaden and Willow. But it’s irresponsible — and, to my thinking, impossible — to still hold that so-what position now that violence has been threatened and censorship coerced.

I can’t help but think back to the “Muhammad cartoons crisis” that took place nearly a decade ago. In one of the most disgusting acts of blanket journalistic cowardice imaginable, the American media almost uniformly refused to reprint or display the cartoons in question, waving the banner of multiculturalism or citing the goal of not being offensive. There are only so many euphemisms for fear, but on that occasion fear by any name trumped American journalistic integrity. Granted, a movie theater is not a news organization, and a teenager who makes minimum wage mopping up artificial butter topping surely shouldn’t have to punch the clock with a terror threat (even an idle one) in mind. We need only remember the 2012 mass theater shooting in Aurora, Colorado, at a midnight premiere of The Dark Knight Rises to conjure up a horrifying picture of what violence in a theater might look like. So I won’t lay much blame at the feet of theater chains. Nobody needs that type of business.

However, I will argue that this by-all-indications forgettable movie has now become must-see. And if a Chicago theater eventually screens the film, I will gladly shell out for a movie that you’d otherwise have to pay me to go see. The stakes are simply too high to wait for Redbox.

President Obama has already stated that Sony made a mistake by canceling the release. Clearly, the argument can be made that theater chains, in actuality, cancelled it. Regardless, Obama remains 100% correct in saying that this conciliation sets a dangerous precedent. We’ve now permitted a petty, backwards, and inhumane government — one with no place in a civilized world — to censor our film industry. Worse yet, we’ve once again shown that we’re susceptible to fear. It’s reminiscent of the concluding battle scene from Independence Day. Once one invading alien spaceship is defeated, a general in a control room barks out, “Let’s get on the wire. Tell every squadron around the world how to shoot those fuckers down.” Our weakness has been exposed. What’s to stop North Korea or other countries, organizations, and individuals from using fear-based tactics to impose their wills on our entertainment industry (or worse) in the future? Am I overreacting? In response to the threats launched against Sony, New Regency Productions has already cancelled production on a film adaptation of the Canadian graphic novels Pyongyang: A Journey Through North Korea, which was set to star Steve Carell and be directed by Gore Verbinski. Apparently, Pyongyang is completely off limits now.

We should also never neglect the fact that even a facetious film like The Interview highlights precisely what distinguishes our freedoms from the abject servitude found in North Korea. We aren’t made to slog through utterly meaningless existences with no other purpose than to praise the dear leader from morn ’til night. If an American filmmaker wishes to create a piece of cinema that lampoons another nation’s leader or criticizes our own, they have the green light to try and pursue that project. Our film industry, for all its flaws, boasts a far more noble tradition than the state-run studio system of North Korea, which has always been headed by a familial dynasty characterized by flabby cheeks, atrocious haircuts, and even worse human rights violations. Some of film’s most courageous stands against evil have come from unlikely funnymen. Even before the United States had committed to entering World War II, The Three Stooges’ You Nazty Spy! (1940) and Charlie Chaplin’s The Great Dictator (1940) were already mocking Hitler — and let’s not forget Mel Brooks’ victorious tap dance on the Fuhrer’s grave via his directorial debut, The Producers (1968). More recently, South Park creators Trey Parker and Matt Stone parodied Jong-un’s father, Kim Jong-il, in scathing marionette form in Team America: World Police (2004), complete with the showstopping number “I’m So Ronery”. We do our national security and the hopes of the North Korean people no favors by keeping mum, and if a film in which Seth Rogan conceals a drone inside his ass is enough to get under Jong-un’s copious folds of skin, then we’ve pinpointed a weakness as well.

In response to this week’s events, pornographer Larry Flynt’s Hustler Video has already promised to make a pornographic parody of The Interview. “If Kim Jong-un and his henchmen were upset before, wait until they see the movie we’re going to make,” Flynt said. “I’ve spent a lifetime fighting for the First Amendment, and no foreign dictator is going to take away my right to free speech.” I can’t promise to see that one, but I’m with him in spirit. By all means, let the cameras roll, Mr. Flynt.

The real question that remains is what happens to The Interview? There are a variety of ways Sony could still manage to monetize the film, but I sense fear may once again win out — despite what Sony brass are now saying. So, here’s what you need to do, Sony. Leave the room. Take five. Let The Interview fall off the back of the proverbial truck. Within a couple of weeks, millions will have watched it, and at least you’ll have stuck the pig who has stuck it to you.

One thing is for certain: The Interview no longer can be dismissed as “only a movie.”

Threat issued by “Guardians of Peace,” the hacking group taking credit for the cyber attack:

We will clearly show it to you at the very time and places ‘The Interview’ be shown, including the premiere, how bitter fate those who seek fun in terror should be doomed to. Soon all the world will see what an awful movie Sony Pictures Entertainment has made. The world will be full of fear. Remember the 11th of September 2001. We recommend you to keep yourself distant from the places at that time. (If your house is nearby, you’d better leave.)

Whatever comes in the coming days is called by the greed of Sony Pictures Entertainment. All the world will denounce the SONY.