A handful of gems we'll actually remember in 2015. 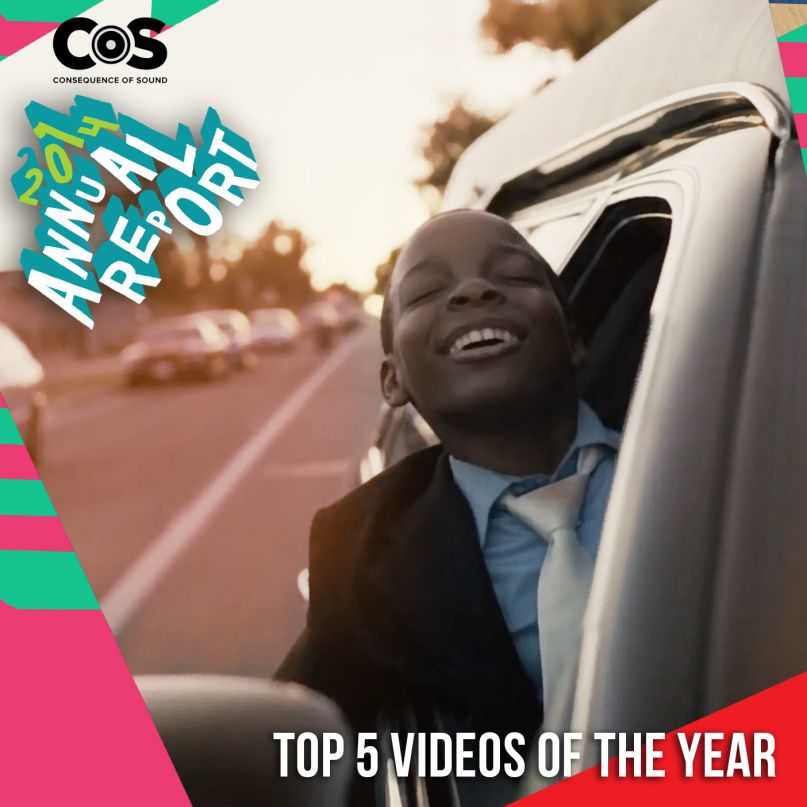 Each year, music videos are swept further into obscurity. They exist on the fringe, where they’re occasionally visited by the die-hard fan looking to satiate their pop culture appetite in ways an album on Spotify could never fulfill. And unless they’re lensed by a cult director or issued by a mainstream artist, more often than not they’re virtually ignored.

We only have ourselves to blame — or our attention spans.

Last year, we rhetorically asked our readers if they could recall the last time they actually sat through an entire music video. We concluded that it was likely a rarity for many, namely because we’re so desensitized in knowing that we can watch anything whenever and wherever. Nothing has changed in 2014; we’re still as distracted as we were 365 days ago. And that’s part of the reason why our news team has actually covered the medium even less in recent months.

Still, that didn’t stop us from naming our favorites. This time, however, we shaved off the excessive 20 entries and stuck with a solid and essential five. In addition to the traditional qualifications of ingenuity, direction, and theme, we expanded our focus to select those we’ll actually remember. But hey, who really knows? Given the half-life of most artifacts in pop culture, does anyone recall anything even two months later? Do we even remember who we were two months ago? Does anything matter?

At the halfway point of 2014, St. Vincent was one of the clear-cut contenders for artist of the year. She was inescapable; Pitchfork here, NPR there, national TV a few times, and everyone seemed to talk about the gray-haired phenom that is Ms. Clark (this website was certainly not exempt). A fine portion of America was introduced to St. Vincent after seeing her on Saturday Night Live and watching the mixed reaction that followed; the hot takes and gut reactions were easy to spot whether you were on Twitter or not. It seemed to me that anyone who had been paying attention to St. Vincent would only further feel the way they already felt, as that polarizing performance with its staged choreography was just a tamer live version of the robotic dances found in the “Digital Witness” video.

With an Orwellian atmosphere and plain-stated colors, the video is one of the most distinct looks at a time when videos are increasingly uninteresting marketing tools. Watch the background — are those pyramids? Did someone paint a skyline onto a building in the skyline? Why are those odd buildings shaped like Tetris pieces? The unusual backgrounds only strengthen the quirky foreground: uniformed marchers and hand-holding coffee drinkers all leading the dances no one thought to dance before — moving just the hand, some slow, high-knee walking, the blinks, my God, the blinks. The Rubik’s Cube dances blend with the odd guitar riff and that strange rhythm that sounds like “California Love” on some ’80s synth tuba rather than a piano, helping remind what St. Vincent was here to remind us: Yes, music is art. Yes, there is a visual element. No, she doesn’t care what you think. Yes, the “Digital Witness” video, like the album the song comes from, is one of 2014’s best.

Perfume Genius (aka Mike Hadreas) isn’t afraid of confrontation — he’s empowered by it. In a press release sent along with the “Queen” music video, he says, “I’ve seen faces of blank terror when I walk by. Sometimes from seemingly strong, macho dudes — somehow my presence confuses and ultimately scares them.” It makes sense that, in the “Queen” music video, Hadreas would take the role of a surrealistic action hero. Teaming up alongside his female counterpart, the two storm into a building at night and proceed to wreck it. They carry baby pigs up elevators, smash monitors, and confront one-legged Elvis impersonators.

The scenes straddle the line between unlikely heist and drug trip. Hadreas repeatedly snarls at the camera, reinforcing the fact that he is a force of destruction and will ruin anything that gets in his way. He dominates every scene he walks into. Late in the video, he trades his sequined tank top for a low-cut pantsuit as he barges in on a board meeting. He grabs the business men by their ties and flexes his muscles as they all try to protect their plates of giant shrimp.

Just like ‘80s metal music videos played up the testosterone with the lead singer riding motorcycles and getting the girl, “Queen” has a similar effect. Instead, however, it asserts Hadreas’ dominance with his own sexuality. There’s a powerful duality when he looks in the mirror and sees a woman striking poses instead of his own face. Yet he remains poised throughout, rising above all of the psychedelic imagery as the video’s constant figure. For those who grew up watching those metal videos thinking, “I want to be that guy!”, imagine what Hadreas can inspire in future generations. In 2014, it’s not about asserting your machismo; it’s about having confidence in whatever sexuality you possess.

This video is absolutely insane from the jump, with Action Bronson kicking things off by firing off some large-caliber rounds in the desert before appearing bedridden in an Army hospital. Why is he there? Who knows and who cares; let this man cook. Taking the name of the Dennis Hopper/Jack Nicholson/Peter Fonda motorcycle epic, “Easy Rider” is an anthem. Usually rap videos are nondescript, just the rapper spitting bars to the camera, so you can clearly see the skills. Not for Action, though, who uses his song more as a score for the beautifully shot video, directed by Tom Gould.

He traverses the desert, interacting with a number of people in a number of different ways: wooing and taking acid with a beautiful motel desk clerk; brawling with a bar full of bikers; leading the cops on a high-speed pursuit; and receiving guidance from an elderly Native American. When a video fits the song, it’s a truly special thing. When it fits it this well, it’s something to be remembered fondly for years and years. The song’s psych rock/hip-hop combination reaches its pinnacle in the final stretch of the video, as Bronson stands atop a desert rock formation, shredding on his newly retrieved guitar and rocking an ankle-length leather duster like the goddamn boss he is.

There are so few rappers today with a personality dynamic enough to pull something like this off, and to be honest, I’m really OK with that. Action Bronson is one in a million, and watching him in this video is like witnessing the true arrival of a star.

Listen once and it’s a party song about letting loose, drinking too much, and turning the light fixtures into trapeze swings. Watch the video for “Chandelier”, and you’ll never be able to listen to it without hearing the electric hum of a fluorescent limbo in the background. Co-directed by Sia and Daniel Askill, “Chandelier” stars Maddie Ziegler, a young dancer known for appearing in the reality show Dance Moms. Here, her stage is a dilapidated home, maybe abandoned, maybe just set sometime after the apocalypse.

Ziegler appears alone in an apartment decorated only with her own drawings. She wears a wig cut in the hairstyle that Sia usually wears herself, and one of the drawings seen early in the video seems to depict the Australian singer. If she’s lost a family, Ziegler doesn’t seem to feel it. This house is her playground, and she dances through it with maniacal rhythm. Sometimes she seems to lapse out of dancing into miming everyday household rituals, like her muscle memory’s overriding the blight around her. Most of the time, she’s simply tracing beauty across a barren space.

She bows at the end of her performance as the camera withdraws through a doorway. Her eyes bug out from under the platinum bangs. She looks crazed — is she dreaming? Does she think she’s just finished a routine for a packed auditorium, or is this what she has to do all day to keep from snapping?

You’ll never find out where the people in her drawings went, and that’s exactly the kind of mystery that keeps drawing you back into “Chandelier”. It’s that rare music video that offers new details every time you watch (have you seen the scrawlings on her hands?). Coupled with Sia’s life-affirming swell, it’s a chilling shadow of who we might be when we can no longer pretend that tomorrow doesn’t exist. At least the music’s good in purgatory.

Death will always be waiting. You know that, I know that, and Flying Lotus knows that. But what about Kendrick Lamar? “Lookin’ down on my soul now, tell me I’m in control now/ Tell me I can live long and I can live wrong and I can live right,” he raps in “Never Catch Me”. Over spastic jazz beats, the Compton MC breathlessly parallels his mortality with his rising career, insisting that he lives strictly for the game and that his accomplishments there will outlast him forever. “I got mind control when I’m here, you gon’ hate me when I’m gone,” he eerily adds, a hypothetical that rings true rather than strictly narcissistic.

The unstoppable Hiro Murai grasps these ideas in his accompanying video for the You’re Dead! single. Slowly, he follows Kendrick throughout his emotional meditation, never getting lost in his words, which is something that’s fairly easy to do when you really stop and think about each line and bar. Instead, he conceived an appropriate pitch — two unstoppable children doing what they do best despite the inevitable — and executed it with startling clarity. Everything from the organic cinematography to the divine choreography is stunning, demanding repeat viewings from here until, well, you know.

In addition to being a rumination on the afterlife, a topic that haunts FlyLo’s latest album, Murai’s work also connects to Kendrick’s own video for “i”. While the latter was directed by Alexandre Moors and the Little Homies, the two share a few striking similarities, most notably the way both the little boy and Kendrick himself tickle their inner Joker by sticking their head out of a car window. It’s an image that speaks to the anarchic, life-loving attitude that pervades both songs, and I don’t think this commonality is a coincidence.

Right now, Kendrick’s on an intriguing path, wedged in between the dangers of self-expression and the pitfalls of personal myopia. “Never Catch Me” is but one chapter in his post-“Control” career, and it’s by far his most intriguing few pages yet. That he was able to bring these thoughts to life with one remarkable music video only speaks to the quality he’s producing and aligning with these days. Like they always say, genius loves company.