Belle and Sebastian – Girls in Peacetime Want to Dance 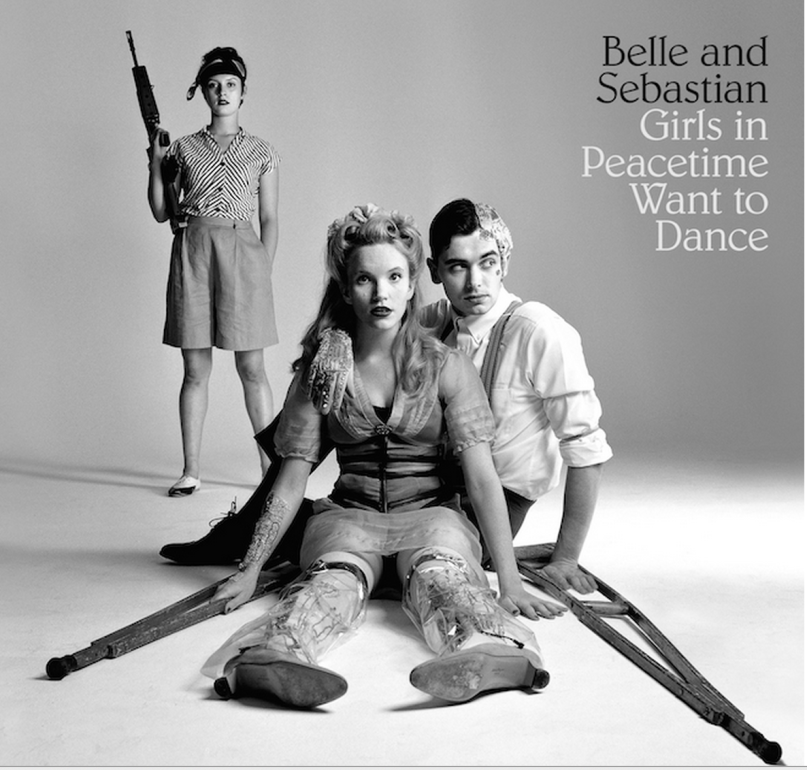 If someone had said a year ago that Belle and Sebastian would have a Europop song called “Enter Sylvia Plath” on its new record, would you have believed it? After all, the Glaswegian indie pop group is notable in part for being so damn consistent. From Tigermilk to Write About Love, the band’s entire discography has been packed solid with batches of indie pop that deftly tread the line between smart and saccharine. While they’ve experienced marginal dips in quality, namely Storytelling and arguably Write About Love, the band can always be trusted to deliver strong melodies and clever, introverted lyrics.

On Girls in Peacetime Want to Dance, the band’s ninth album and first in over four years, Belle and Sebastian attempt to be an ensemble again. (Frontman Stuart Murdoch took a brief reprieve to realize the film God Help the Girl, which he directed, wrote, and scored.) Breaking the largely acoustic formula of their oeuvre, Murdoch and co. decided to put on their dancing shoes and dip into a wealth of new genres and moods. Though they’d previously hinted at dance music with the peppy synths on Write About Love and the horn-laden Dear Catastrophe Waitress standout “I’m a Cuckoo”, the band has, until now, never let their toe-tapping impulses take center stage.

Here, the band continue their streak of using established producers, this time enlisting Ben H. Allen III (Animal Collective, Gnarls Barkley), who manages to entertain their ambitions while keeping their sound largely intact. Even with all the bubbly, jam-minded new sounds, though, this is still a Belle and Sebastian album. The shift is confidently executed on “Plath” and “The Party Line”, tracks characterized by a pulsating synth thump and funky bass lines.

Album highlight “Nobody’s Empire” kicks off the album splendidly. Billed as Murdoch’s “most personal” song ever, the track touches on his bouts with chronic fatigue syndrome in its beginning stanza: “Lying on my bed, I was reading French/ With the light too bright for my senses/ From this hiding place, life was way too much/ It was loud and rough round the edges.” Surrounded by shimmering pianos, bright synths, and a crisp studio sheen, the song emerges as one of the most intimate and triumphant of the band’s career.

Given the title, it’s easy to imagine this being a political record, but true to form for Belle and Sebastian, it’s more personal. Any insight on current events is broadly and vaguely rendered. “Allie” contains the lyrics “When there’s bombs in the Middle East/ You want to hurt yourself/ When there’s knives in the city streets/ You want to end yourself,” while the refrain to “The Party Line” (“jump to the beat of a party line”) is less of a partisan joke than a call to the dance floor. Only on “The Cat with the Cream” does Murdoch look outward rather than inward, with lines like “Everybody bet and in the government trusted” sharply coloring its baroque stylings.

Despite all the Europop bounciness, there’s still a wealth of bread and butter Belle and Sebastian offerings here. “Ever Had a Little Faith?” ranks as a perfect amalgamation of everything that’s made this band so enduring, from the way Murdoch’s voice makes the song sound like a lullaby to the acoustic guitars, the lilting strings, and the uplifting lyrics (“You will flourish like a rose in June”). When the band engages with a more straightforward funk rock approach, as on “Perfect Couples”, the results are less stellar. Other than a soulful melodic twist toward the end, the song’s structure and singsong hook grate over its five and a half minutes. The atmospheric, synth-laced “Play for Today”, however, justifies its elongated seven-and-a-half-minute runtime; Murdoch and guest vocalist Dum Dum Girls’ Dee Dee Penny lovingly trade vocal duties as they punctuate the album’s second half.

Even with its stunning, heartfelt moments, it’s hard to think of Girls in Peacetime Want to Dance as a cohesive Belle and Sebastian album. The band manages to blend their signature brand of subdued indie pop with new, bombastic disco cuts, but sometimes the disparity can be jarring. Songs like “The Power of Three” can’t split the difference between the banging “The Party Line” and the meandering waltz of “The Cat with the Cream”. What’s important, though, is that 20-odd years into the band’s career, Murdoch and co. can still cling to vitality and fun even as they embrace change.

Essential Tracks: “Nobody’s Empire”, “Ever Had a Little Faith?”, and “Play for Today”