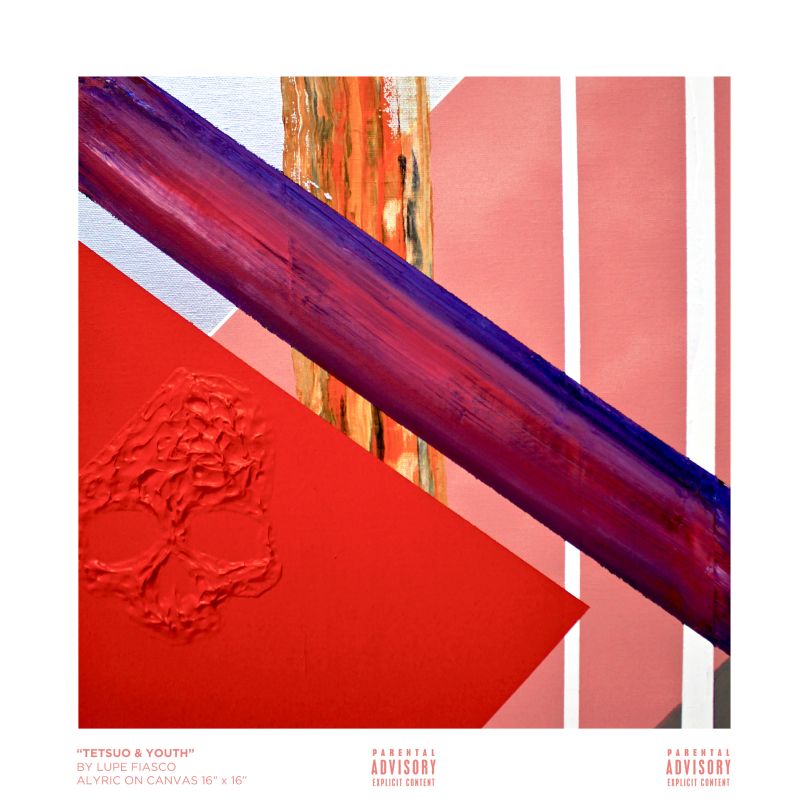 People were mad at Lasers. More specifically, they were mad at Lupe Fiasco, once considered a savior of hip-hop by listeners who needed one, for making such an overtly commercial album on just his third at bat. Lupe maintains that he’s never released any “bullshit,” and he’s not wrong, per se. Apart from its Bill O’Reilly-baiting political correspondence, Lasers’ themes — self-confidence chief among them — were welcome enough. The heavily electronic production and the distracting prominence of guest vocalists, however, suggested that it was Atlantic’s album more than Lupe’s. His fans let out a collective exhale, then, when he followed it up in 2012 with the more focused Food & Liquor II, the sequel to his 2006 debut, and he’s only gotten more ambitious since. He’s calling his fifth album, Tetsuo & Youth, a masterpiece, point blank. With some of his densest verses ever and a handful of eight- and nine-minute songs (not only does the 9:33 trap rap monolith “Chopper” feature seven rappers total, each verse lasts 32 bars rather than 16), it’s hard to imagine him calling it anything else.

Lupe has also described the album — which might not have come out at all if not for the group of hackers who demanded Atlantic give it a release date — as “lyrics on top of lyrics on top of lyrics.” But beats-wise, the fabric of the album is vast and many colored, too, a remarkably ambitious affair before Lupe utters a word. There’s just so much happening here; it takes something like Terrace Martin’s galactic saxophone solo on “Body of Work” to focus the blur on first listen, but eventually it becomes clear that it was maximally and artfully dreamed up much like My Beautiful Dark Twisted Fantasy, with production from S1, DJ Dahi, and others. The shimmering “Mural” samples Cortex’s “Chanson D’un Jour D’Hiver”, and while plenty of other recent rap songs do, too, some listeners are going to have the pleasure of hearing it for the first time on Tetsuo. Elsewhere, heavily distorted guitars are juxtaposed with soft piano passages, and it’s a tactic that works out better here than it did for certain hair metal bands in the ’80s. There’s even a lone banjo during the intro and outro on “Dots & Lines” (word to DJ Quik). It’s a wonder to behold all these sounds, but more importantly, the album is just orderly enough to not fall apart, a Jenga tower that threatens to crash but never does.

Following his recent beefs with Kid Cudi, Azealia Banks, and Freddie Gibbs, it’d be fun to hear Lupe talk his shit for 78 minutes, but ultimately he’s too busy indulging his own linguistic whims. After “Summer”, the first of the four seasonal instrumental tracks that Lupe calls “sonic palate cleansers,” the nine-minute, hook-less “Mural” is a thrilling proper opener for the album, with Lupe’s language recalling that of Aesop Rock or Shabazz Palaces’ Palaceer Lazarro. His abstract phrases overlap in a way that lets you know this isn’t verbal trickery for the sake of verbal trickery. Immediately following the kids at play on “Summer”, “Mural” lines like “I like my pancakes cut in swirls, Moroccan moles and undercover squirrels” (seemingly meaningless if you’re not familiar with the source material) recall Kendrick Lamar’s “Cartoon & Cereal”, another lengthy scrapbook of a song.

Though Lupe doesn’t sermonize here as much as he did on Food & Liquor II, he does get topical on occasion. The two-part “Prisoner 1 & 2”, split by a spoken word piece from Lupe’s sister Ayesha Jaco, speculates on racist tendencies of prison officials, not to mention the everyday civilian’s quest to be unshackled of anything and everything holding them down. On “Deliver”, featuring Ty Dolla $ign, Lupe details a place so dangerous that the pizza man doesn’t come around: “Is it ‘cause they’re selling nicks out there all day/ ‘Cause a prostitute sucking dick in the hallway?” he asks of the situation at hand. Sometimes subtle, sometimes not, Lupe is a man with a lot to say and a lot of ways of doing it successfully, without pretentiousness.

Verses aside, Tetsuo & Youth has massive, state-of-the-art choruses from Australian Idol winner Guy Sebastian, Nikki Jean, and others. Still, it’s not exactly a pop-rap album, and recent collaborators like Ed Sheeran and Chris Brown are nowhere to be found — testament to Lupe’s strict vision for his final album on Atlantic. By usual standards, these songs tend to be too long for airplay, but that’s not to say you won’t be hearing them all over the place. Lupe is still a guy to root for, and Tetsuo & Youth is full of daring songs that remind you of why.