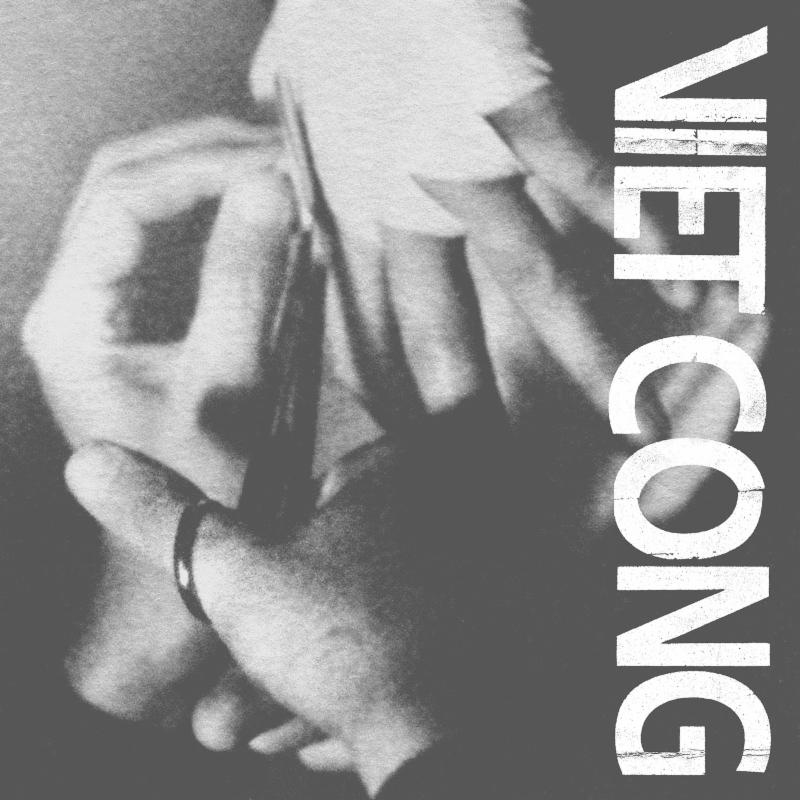 Canadian post-punk outfit Viet Cong has never had it easier. Bassist/vocalist Matt Flegel and drummer Mike Wallace watched their previous band, Women, get twisted up in drama and sharply end when guitarist Christopher Reimer passed away at 26 years old in 2012. Budding ambitions were bitten, but when the two stood back up, Flegel and Wallace knew there was only one thing to do: bite right back.

Joined by guitarists Scott Munro and Daniel Christiansen, Viet Cong’s eponymous debut shoves two hands into death’s heart and reports back with a seven-song setlist. It’s a feast laid out with intentional pacing, feeding the listener scraps of metal before dragging out heftier courses, as narrated by Flegel’s dry vocals that recall Interpol and Echo and the Bunnymen.

It begins privately, with an inner reflection reviewing past turmoil on “Newspaper Spoons”. With a second listen, the blank space pulses with a foreboding grin. This is an album as a whole, not a stapled together list of tracks. In the age of MP3s and careless streaming, their attentiveness to order elevates post-punk to art.

While “Silhouettes” is busy tackling disconnection and intoxication with synths, the rest toys with memory and regret. “Bunker Buster”, released in demo form last year, pounds with brutal codas, thickening itself before splashing with a dark restlessness that sounds like the splicing of death’s rib cage. Then, rather calmly, they shove past pain into an iron gate and peer at it from a comfortable distance on “Continental Shelf”, taking notes objectively.

Viet Cong deal with Reimer’s death in the only way they know possible: with an 11-minute epic that plows forward masterfully. On “Death”, bright riffs trip into a repetitive coda that feels like the comfort — and payoff — of a 10k run. If Deerhunter’s “Nothing Ever Happened” finds success in tight drumming and thumping bass, Viet Cong’s “Death” tightens its grip on the same whip but cracks it even harder, speeding things to an intensity where the pain subsides and its rising numbness is comforting. It’s the taste of iron pooling in their mouths as they run, lashing their guitars through what no doubt serves as a flag raised halfway for Reimer, a reminder to themselves that death is unavoidable. As long as they keep repeating “We will never get old,” they align themselves with Reimer, waving one final salute.