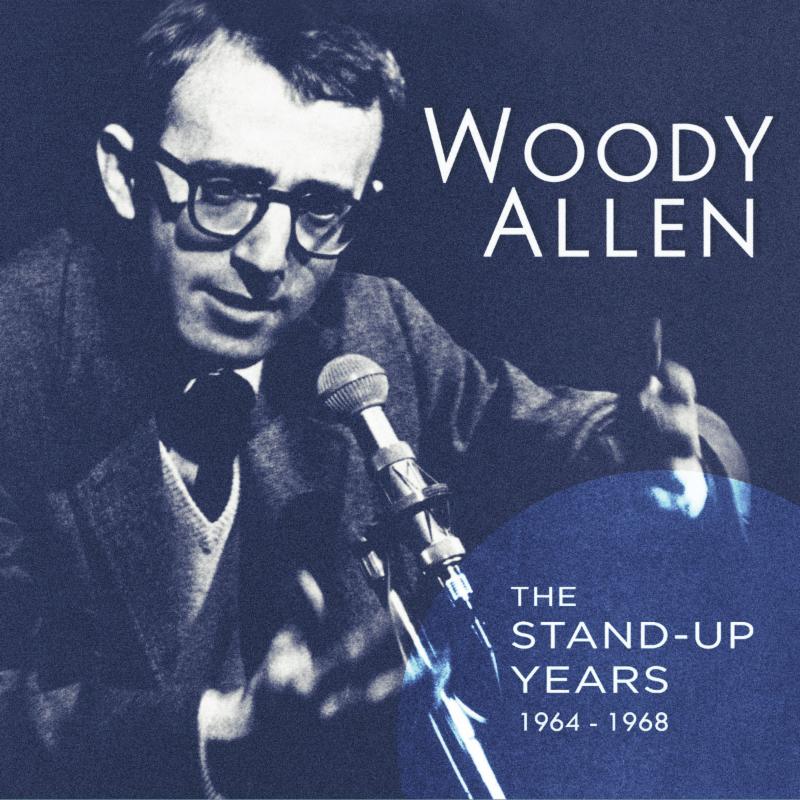 Woody Allen is 79 now, and he’s still working, still making movies of decent to marvelous quality every year, yet, one has to start wondering what he’ll be remembered most for when his time is done. It’s probably an obnoxious side effect of old age: existential evaluation. Amidst all the hype, legacy, and scandal surrounding Woody Allen as a brand-name writer, director, actor, neurotic, and potentially dubious family man, Allen above all has been a consummate joke maker. He’s just always been an incredibly funny guy.

Listening to The Stand-Up Years 1964-1968 is a delightful timepiece and a fabulously constructed best-of portrait of Woody Allen.

Stand-Up Years culls materials from Allen’s three albums in the ‘60s, along with previously unheard bits. The compilation’s a funny thing not just because of Allen’s sense of humor, but because Allen resisted doing stand-up for the longest time. Allen was only secondarily interested in stand-up; he’s admitted to always thinking of himself as a pure playwright. Yet, when he met with the likes of Jack Rollins and Charles Joffe, “the Rolls Royce of management,” as Allen brags in the album, he was provoked into being a comedian. Of course, Allen resisted at first and then went to work making the jokes with his typical nebbish fervor. Allen drops anecdotes about how Jack Rollins saw him as nothing but pure potential, the makings of a major star, and was incredibly supportive and willing to tap the comic’s unrealized gifts. Nice one, Rollins.

Admittedly, much of The Stand-Up Years was already heard in the perfect 1999 collection Standup. The last five tracks are just excerpts from Robert B. Weide’s phenomenal Woody Allen: A Documentary from 2012. Still, that doesn’t make Allen’s jokes any less funny or this package less intriguing. Everyone’s fully aware of his distinctly East Coast nasally aura, and it doesn’t jive with everyone. If you want shouty observations and Aziz Ansari-style parodies, there are hundreds of aggressive comedy podcasts out there right now ripe for the picking. If you want a shrewd, witty, and articulate misanthrope at the top of his game, then get in on this. Allen was not into the art of forbearance — he rushed through jokes with anxiously snide mastery.

In a way, Stand-Up Years feels like the loving end of an era for certain comics: the Henny Youngman-style Catskill cats. The Borscht Belt punchliners. Woody Allen, while infatuated with the likes of Mort Sahl and Shelley Berman, brought his own take on comedy. He gave humor a new mode of personality-driven style. In Allen’s case, it was pure self-depreciation. Stand-Up Years gives us Allen talking about failed marriages (“Second Marriage”), his bumbling career (“The Vodka Ad”), his weird family (“My Grandfather”), and some of the finest awkward sexual encounters you’ll ever hear (“Vegas” tears down the house).  But that’s not to say Allen doesn’t indulge in out-there scenarios about hypnosis or a sci-fi film about aliens in need of slacks. It’s like listening to and understanding the classical arts of telling a joke and having a voice. Woody’s presence was unmistakable. Still is. It becomes so amazingly clear while listening to this. The album takes on a complicated quality in how it plays the jokes, then ends with Allen’s self-evaluation of his live audience heyday. Still, and most importantly, the jokes play the rooms.

Allen’s punchline summing up his artistic integrity losing out in the presence of money in his bit “The Vodka Ad” kills every time. “Down South” is still a blisteringly tense tale of Southern-fried phobias regarding the KKK and hangings, told tellingly by a Jewish, left-wing New Yorker, about a great, big mix-up when Allen dresses as a white ghost for a Halloween party and ends up at a Klan rally (“I must’a said ‘grits’ 50 times”). There’s even the “Lost Generation” bit here, which inspired Midnight in Paris many years later.

Perhaps one of the funniest finds is over five minutes of mixed questions and answers he would do at the end of his sets. It’s the funniest and most telling part of the album. Allen talks about his “pro-Catholic pornographic musical” and his political status as a “registered pervert.” That last thing is an “independent party,” Allen nonplusses. During a show, a woman mortifyingly asks Allen if he’s ever “been picked up by a homosexual.” Allen coyly repeats the question, for clarity, then plainly replies, “No, sir.” Quintessential Allen: peerless, depraved, and self-conscious while getting the last, and best, laugh.

Essential Tracks: “The Vodka Ad”, “Down South”, and “Vegas”

Previous Story
Serj Tankian offers an update on new System of a Down album
Next Story
Golden Globes 2015: Who Should Win, Who Will Win
Popular
More Stories
[fu-upload-form form_layout="media" title="Submit Your Photo"][input type="hidden" name="ugc" value="1"][/fu-upload-form]