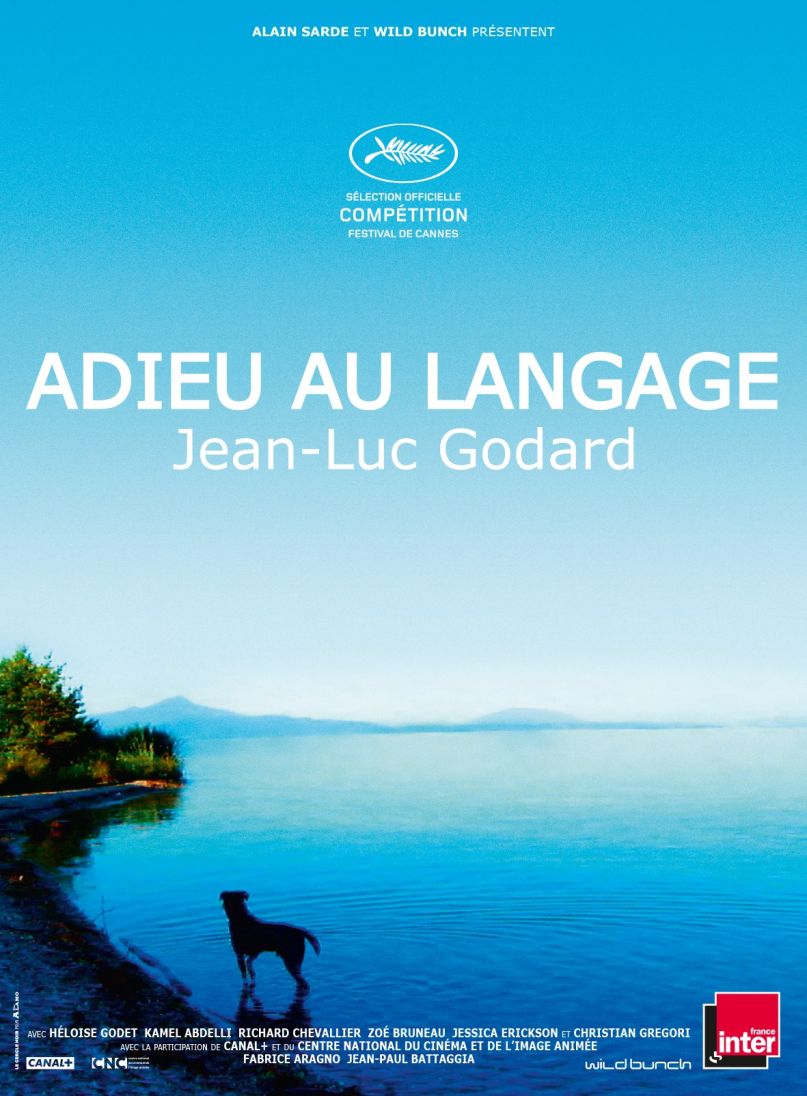 Blake Goble (BG): I left Goodbye To Language exhilarated for a handful of reasons. Watching it, I felt like I was given the privilege of witnessing something entirely new being born. It was the image of a late-period provocateur deconstructing his entire life’s work for the sake of making something new not just for him, but possibly for cinema. It was pure innovation, invention, and experimentation. It’s a satire of modern technology, a challenge to its medium, and a meditation on discovery (among dozens of other possibilities). It was a deconstructionist playbook. It challenged me and provoked me unlike anything I’ve seen in the last year at the movies. It begged for my curiosity and fascinated me endlessly. Seriously, it was a sight to see!

Not to keep riffing hyperbolic, but Jean-Luc Godard’s Goodbye to Language 3D is a must-see event. And yet, it’s hardly fair to consider this as a film, let alone try to give it a grade. It’s just too abstract to effectively summarize, let alone qualitatively critique.

Dom, sorry to go bananas and throw a lot of labels around, but was this not some sort of indescribable achievement?

Dominick Mayer (DM): It really was. And I think histrionic praise is as good a place to start as any, because while we’re going to have to do some gymnastics to try and unpack exactly what this was, or why we were both so taken with it, we can start from a genuine point of admiration and work backwards. But this really was incredible. Not since probably Avatar, a movie you had to watch in the theater for it to be of much value at all, have I seen a movie that so thoroughly demands the theatrical experience. Goodbye to Language is a film that has to be watched in its intended form. Has to. The things Jean-Luc Godard is able to do with 3D as a medium are astounding, because while he very much interprets it as a gimmick in certain respects, he uses that gimmickry to alternately exploit or comment on the ways in which it’s affected the form of film as storytelling, and indeed as language.

But let’s put the platitudes aside for a moment, and do what we can to delineate this. The film is split into two threads of discussion: “nature” and “metaphor,” translated. Both of them prominently feature a couple, who converse on philosophy and equality and mortality, among other things. There’s also a dog, who wanders through the world taking in what he can. Periodically the film is also steeped in footage of classic films and/or violent news briefs.

DM: While the film is heavily, heavily experimental, you can take certain ideas away, chiefly Godard’s apparent contempt for the modern form of storytelling. A lot is said in Goodbye to Language, but Godard seems to argue for the ineffectuality of speech in most aspects of modern life. He empathizes with the dog’s perspective more than he does any of the people in the film, because the dog simply wanders and watches and approaches life with exhilaration. The humans, by contrast, seem to argue semantics for long stretches more than anything.

BG: Yes, the film is very much a re-evaluation of the very foundations of language, and the dog and humans had their purpose. Yet I found them to be inconsequential anchors to the greater work at hand. I don’t think Godard was placing himself in any one person, so much as he manifests himself with curious exploration and extrapolation in the camera. But I agree with you — this is Godard’s restlessness with cinema as a medium, his new worldview through old eyes. Well, maybe. I honed in on an early citation of “An Experiment on Literary Investigation,” by Aleksandr Solzhenitsyn. The author’s work as mentioned in the movie hints at the importance of arts, creativity, and the need for artists to keep trying to be innovative. Damn systemic messaging and corporatized, even militaristic artwork. With that in mind, Godard strives for something pure here. It may be art school critique, but Godard is more than up to it.

It’s just kind of funny. There’s a famous old quote from Godard about how all one needs to make a movie and tell a story is a gun and a girl, and Goodbye To Language 3D meets those minimum requirements almost in a self-deriding way, then ignores his own wealth of knowledge for something completely different. It must be freeing.

DM: Returning to the essential nature of the film as cinematic experience for a minute, though, we have to discuss how sound and sight are used at times almost in spite of the audience. Godard uses 3D to force your eyes into the corners of the frame, to manipulate how you sit and comfortably watch a movie. On more than one occasion, to stunning effect, he loops two scenes over one another. It’s pure disorientation, and it’s also evident in the way sound is used. Godard takes full advantage of the average modern movie theater’s high-end stereo system, separating the audio track at various points into monaural, clashing dissonances. Above all, it’s a movie that challenges the very ways in which we watch movies. And that’s the point.

BG: Spot on. To further characterize (because even I want to make sure I have the faintest clue of what I saw), native 3D requires two cameras with the same focal point, so it can project in three dimensions with the glasses. But what happens if, say, the camera on the right wanders away to focus on something else in a pan? The left stays, but the right seems something new, so it’s like splicing footage right before your eyes with the glasses. You’re right, that looping begs for serious pondering – just what is it that we’re looking at, what does this mean? Whatever the purpose, it’s really cool, and frankly quite sophisticated.

Godard shows the limitations, curiosities, and wonders of 3D as a means to avoid words. Exactly what effect does converting footage to 3D in post-production scenario mean? What happens when the same shot of a boat is seen over and over, with different cameras being used each time? No less than six (GoPro, Lumix, etc.) were used here. Godard has the audacity to chop a Beethoven number, abruptly, into different speakers because he can. Godard also takes everyday sights, like water and flora, and filters them through dozens of audio and visual forms. Even written text, words themselves, avoids any classical connotations with shifting placements and depth of field. It’s pure art.

DM: And yet, even having touched on how artfully the film is made, there are also moments amidst the pure insanity of watching Goodbye to Language that resonate. At one point, one of the film’s central tenets is made explicit in the dialogue: “I hate characters. Ever since birth, we’re mistaken for another.” In a lot of ways, this is pretty empathetic stuff. The argument isn’t that the people onscreen don’t matter, or that it’s not simultaneously hilarious and heartbreaking when a woman’s husband interrupts her cries for equality with a contradictory diatribe about the expulsion of feces as the ultimate equalizer of all humankind, complete with the loud stereo sounds of pooping. It’s that whatever they might have to say is being trivialized by the very act of having to tell a story within a film. At least, that’s one way you could parse it out.

Goodbye to Language has other pointed moments in this vein, to be sure. At one point we’re informed that “In Russian, kamera means prison.” Elsewhere in the film, there’s the idea that “what they call images are the murder of the present.” For somebody bending, abusing, and reinventing the medium as he goes, Godard is weary of the true ceiling for what we can accomplish with films. It’s something that I feel like we’re both sort of averse to addressing, given what we’ve collectively chosen to do for a living, but at the same time, is his point invalid? Not really. Godard seems to be wondering at points how many stories there are to tell that aren’t just permutations of other stories, and it’s interesting that Goodbye to Language even features tattered shreds of what the filmmaker himself is known for: kinetic edits, free-flowing conversations, striking uses of color. But it’s all tangled up in what feels like exhaustion and invention at the exact same time.

BG: Speaking of exhaustion, best wishes to those trying to find this film. Goodbye to Language is a special film, one that truly earns the right to the theatrical experience. We lucked out in being able to see it at the beginning of its three-week run at the Gene Siskel Film Center here in Chicago. It played at a small handful of American festivals over the past six months, but it’s likely not going to get a 3000+ run. If you’re a curious filmgoer, I implore you, find this film. Whether it’s by coming out to Chicago right this second, or waiting for a special screening in the near future, Goodbye To Language is a film worthy of urgent recommendation, not because it’s a great film, or because people will love it, but because it’s such a diamond in the rough. With the exception of experimental film festivals, I don’t know if we’ll ever see something like this in a major theater, but boy does it deserve to be seen. And then picked at. And re-considered. And gabbed about, for a long time to come.