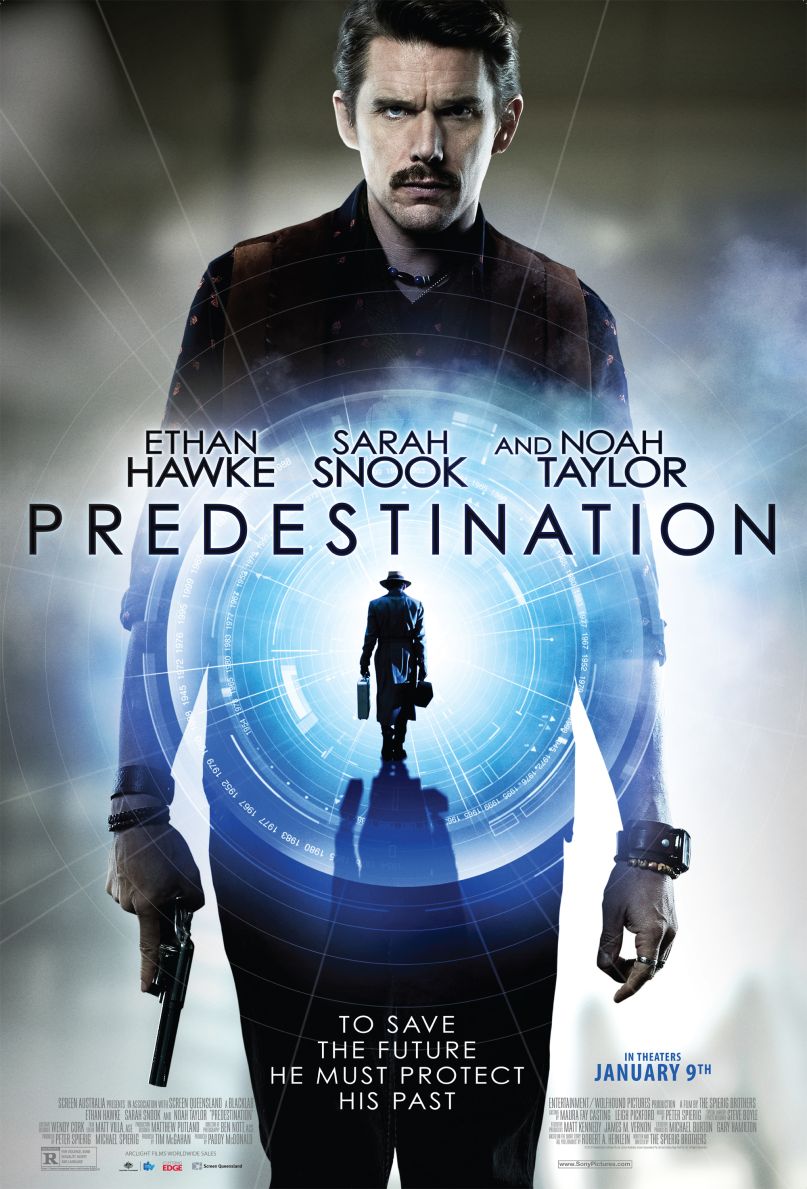 Disclaimer: This review will discuss the concept of time travel, a still entirely fictitious (as far as we know) phenomenon. We’re not here to talk science, but how it’s explored with fiction. So if you want to argue Predestination’s temporal qualities and logic, by all means go to a diner and get a cocktail napkin and a pen. We’re more interested in measuring plot, not possibility. Though Predestination is reasonably, gracelessly sound. We’ll get to that.

Generally speaking, fiction depicts time travel in two ways. For one, there’s the concept that time travel can alter the past and in essence alter the future. Think Back to the Future’s alternate timelines in Part 2, with Biff gambling his way to greasy success and fake, plastic Lorraines. Then there’s the notion that time travel is a wild goose chase, as all time is preordained. If you go back and witness something specific, you were always there in that past — that’s how the timeline always happened. La Jeteee and its remake, 12 Monkeys, immediately come to mind.

Personally, the former always seemed like more fun. Sure, the latter can allow for deeper insights, but there are never any hoverboards. Sorry, it’s the 2015 talking.

Predestination wants to trick viewers into thinking it’s the former. Based on “All You Zombies” (a far stranger and more enticing title), a 1959 short story by sci-fi author Robert Heinlein, Predestination chronicles a time travel agent sent back to look for the “Fizzle bomber” in the 1970s. Ethan Hawke, probably feeling cooler than ever, is that agent. After a botched mission, he goes back for that “one last job” in the ’70s, a hunt for the elusive explosion enthusiast. He knows this time he can change the future and save thousands of lives thanks to his time travel device, which is shaped like an instrument case. However, and this shouldn’t come as a surprise, the movie spoils itself with its own bland title. Predestination? So we’re looking at an ouroboros despite the first 75 minutes swearing to the contrary? (This can hardly be called a spoiler if it’s right there in the title.)

With that in mind, Predestination diffuses much of its own tension and forces quick re-consideration, all for the sake of an obvious misdirect. Without actually spoiling anything else, the film deals with sexuality in its most perplexing and curious play at time travel. But the paradoxes the film sets up are only momentarily intriguing, then immediately flummoxing.

Is this a bafflingly complicated love story? An extended metaphor on futility? Are we all cogs in a bureaucratic machine? The movie can’t help but leave one ultimately disappointed by how much effort it puts into masking its grandeur. Again, the title really chisels away at any major “ah-ha” moments.

Predestination spends its first hour characterizing Hawke’s potential mark on the past, and it’s the best part of the film. Young Aussie actress Sarah Snook puts in diligent effort as a man who used to be a woman. As the “unmarried mother,” Snook tells a story of heartbreak and lost dreams. It might have actually been a stronger and more focused story on its own, instead of a plot device for sci-fi gobbledygook.

In the last act, when the actual time jumping occurs, Predestination has so little confidence in its conceit that what we’re left with feels like belligerent exposition. Perhaps we should have seen that coming, too.