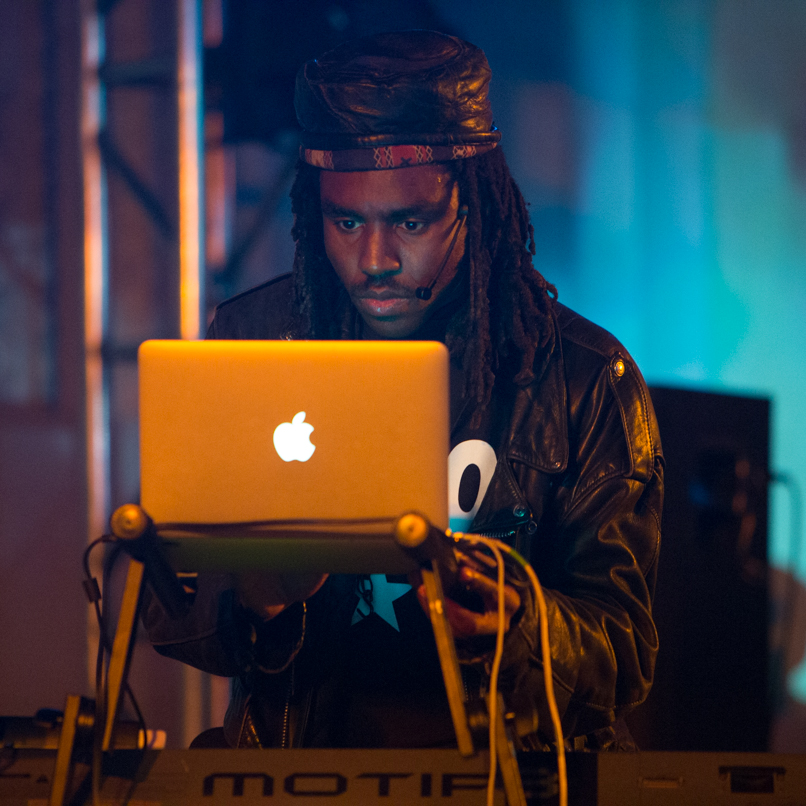 Of the party holidays, there is New Year’s Eve and there is Halloween. As a former bartender, these, along with St. Patrick’s Day and Cinco De Mayo, all hold a certain dread, but New Year’s displays a different vibe than the rest. While the others are primarily about getting fucked up with either a costume or cultural appropriation to coincide, New Year’s is about the past and the future, and celebrating at least one of those, if not both.

The interplay between the old and the new was what Blood Orange (aka Dev Hynes) seemed to have in mind in his just-after midnight performance. After the largest ballroom at the Legendary Park Plaza hotel had counted down to zero, Hynes picked up his electric guitar and played “The Star-Spangled Banner”, evoking the distant past of another guitar great, Jimi Hendrix. From there, Hynes wished the dapper and toasty audience (there was an open bar) a happy 2015, and kicked right into one of his best known songs, “Champagne Coast”.

These calls to familiarity were the exception and not the rule, as Blood Orange used the party as a chance to debut a host of new music. The venue might not have been ideal for hearing these songs for the first time, as a shoddy PA and echoey acoustics threw off the performers and made for sub-par listening. But here’s the thing: It doesn’t take a great mix to hear that Hynes is a great songwriter. Every new song sounded familiar by the time it ended. And, if you were having a hard time making out the melody at first, one simply could look side-stage at Blood Orange collaborator Samantha Urbani mouthing along the words and dancing to get in the right spirit of the songs.

Of course, Urbani didn’t just cheer Hynes on from the sideline. Three songs in, she confidently stepped up to the mic for what is probably Blood Orange’s most beloved song, “You’re Not Good Enough”. Urbani, who had already sprayed champagne on the rail-standers during “Champagne Coast”, is such a natural frontwoman that her ascent to stardom in her own right seems like a foregone conclusion. Who knows if it will happen in her band Friends or if she needs to try something new, but her charisma is undeniably great, and unreliant on her fantastic chemistry with Hynes.

But for the most part (Hynes was also joined for a song by Kindness), Blood Orange was on his own to impress, sprinkling in known tracks but leaning heavily on the new. There are no specifics on when these songs might actually be released, but they didn’t sound like works in progress. And, given that Hynes promoted the show as a chance to hear new Blood Orange material, it seems unlikely that the tracks would be held back for any significant time.

The hall reached capacity during Blood Orange’s set, far more than were in attendance than for the previous act, IO Echo. Despite the more than $100 price tag for admission, fans turned out not just to be seen at the luxury event, not just to get wasted and wait in line for the ladies room, not just to make out on a dance floor — though, yes, some people did show up and do just these things. Hynes made spending a holiday at a concert seem worth it, granting fans an experience that is worth remembering. What a way to start a year.