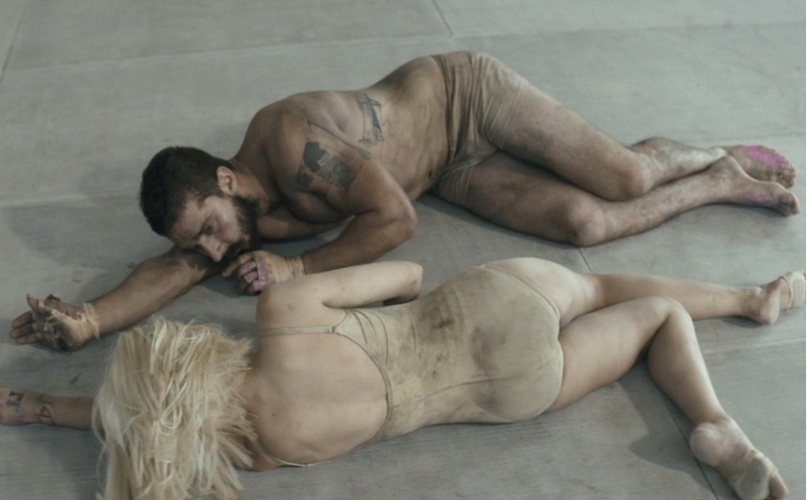 Yesterday, Sia released her new music video for 1000 Forms of Fear single “Elastic Heart”. Directed by the Australian pop singer and Daniel Askill, it featured actor Shia LaBeouf and child dancer Maddie Ziegler performing an intense interpretive dance routine within the confines of a cage. Less than 24 hours after the clip premiered online, however, it’s already stirred up much controversy with many viewers calling it “creepy,” inappropriate, and even suggestive of pedophilia.

Most of the negative critiques point to the physical contact between LaBeouf, 28, and Ziegler, 12, both half-dressed in tattered cloths. There are moments in the video when their bodies are entangled, some when she’s on his back, and others when they are lying beside one another.

Earlier this morning, Sia took to Twitter to address these concerns. “I anticipated some ‘pedophelia!!!’ Cries for this video,” she wrote. “All I can say is Maddie and Shia are two of the only actors I felt could play.” She added, “I apologize to those who feel triggered by #ElasticHeart My intention was to create some emotional content, not to upset anybody.”

Sia also gave context to the intimate choreography, noting that LaBeouf and Ziegler were meant to represent “two warring ‘sia’ self states.”

I anticipated some 'pedophelia!!!' Cries for this video. All I can say is Maddie and Shia are two of the only actors I felt could play

I apologize to those who feel triggered by #ElasticHeart My intention was to create some emotional content, not to upset anybody. ????

These two warring 'sia' self states.

To be fair, many YouTube commenters who appeared to praise the video offered similar interpretations relating to “inner struggles.” One person named Punch wrote, “the little girl clearly represents old Sia and her bad habits (watch “Chandelier”) and Shia represents her new self, strong but still holding onto her old self, fighting to not become her again, and maybe even falling back into her old ways at times. In the end she just can’t let go of her past even if it’s wrong.”

Another commenter, Me Gusta, came to an almost identical conclusion, saying, “I’ve got thick skin and an elastic heart” Shia represent the rough, aged and “thick skined” personality forged by years (you can see it by the beard) and Maddie represent the heart, simple, young, naive, and allways [sic] emotional. The cage represent the bound between the 2 of them, you can’t escape from your heart so you start fight against her but in the end you allways [sic] get along.”

For what it’s worth, I personally found nothing wrong with the clip. Interpretive dance is just that — interpretive. Also, as we’ve come to learn more about Sia and the kind of artist she is, I think it’s safe to say that the art which she puts forth always has a deeper meaning. Skin doesn’t always = Sex. Touching doesn’t always = Lust. Dancing doesn’t always indicate something carnal.

Below, watch the video that started it all.