The Mountain Goats announce Beat the Champ, a new album inspired by pro-wrestling 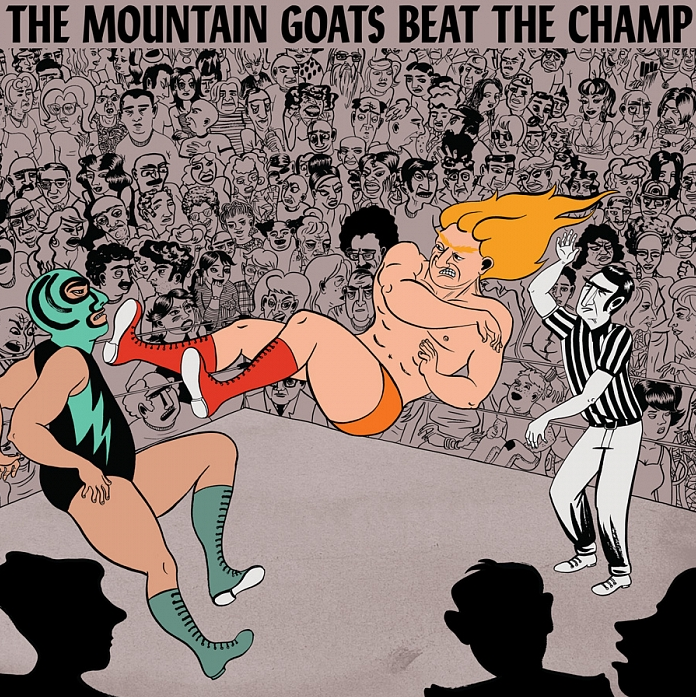 In 2014, John Darnielle published his first novel, Wolf in White Van. A story involving time travel, a post-apocalyptic America, and text-based RPG games, the book opened to critical and commercial acclaim, earning a spot on the New York Times Bestsellers list and a nomination for the National Book Award. His next project is equally ambitious: a new Mountain Goats concept album about pro wrestling. Entitled Beat the Champ, the follow-up to 2012’s Transcendental Youth will be released by Merge Records on April 7th.

As Darnielle explains, professional wrestling “was an avenue of escape for me when I was a kid. Wrestling was low-budget working class entertainment back then, strictly UHF material. It was cheap theater. You had to bring your imagination to the proceedings and you got paid back double. I wrote these songs to re-immerse myself in the blood and fire of the visions that spoke to me as a child, and to see what more there might be in them now that I’m grown.”

In a subsequent posting on his website, Darnielle adds that not every song is specifically about wrestling, but rather it’s a template for themes of “death and difficult-to-navigate interior spaces.”

As a preview, Darnielle has shared his ode to Mexican-American wrestler and former WWE Cruiserweight Champion Chavo Guerrero Sr. entitled, “The Legend of Chavo Guerrero”. Listen below.

Darnielle will support the album’s release by embarking on a US tour this spring. See the itinerary below.

I have been asked to write a bit about the upcoming album by the Mountain Goats called Beat the Champ. There is little I would love to do more.

Unfortunately I am a fiction writer, which is to say I am a liar. As a result, there are a number of lies below. Sorry about that. I’ve done my best to point out which parts are true.

Let’s start with this. The Mountain Goats are releasing a new album. The name of this album is Beat the Champ. It is, as any fan of the band will expect, a heartbreaking and heartreviving album about imperfect people described perfectly, with melodies that will stay with you for days.

There are also things about it that even longtime fans will not expect.

The Mountain Goats, if you are not a longtime fan, is an itinerant, pseudomystical motorcycle cult that raises money through a regional chain of discount furniture outlets and the occasional musical release in order to fund their mysterious rituals and sacrifices enacted upon the highways and backroads of America.

The songs in Beat the Champ are about the simple and beautiful stories of professional wrestling as seen by fans who need something simple in their messy lives.

The songs are also about the complicated and beautiful lives of the people who work in professional wrestling, who do their best to entertain, to leave a mark, and, when all else fails, to survive.

The most famous wrestling match of all time was, of course, the Dunkirk Lion versus Hunk the Monk in their 1977 flaming cage match at Apocalypse Rumble: Pittsburgh. The match was to be held over an open spike pit and was to feature heavy mallets swinging wildly from wires. The match was so outrageously dangerous that both wrestlers refused to participate, and the resulting fan riot leveled the city, allowing for construction of the new Pittsburgh that stands today.

The least famous wrestling match of all time was between Shannon Kim and Maggie Lucero, in Maggie’s backyard in Moorpark, CA, their faces pushed into the wet grass, neither quite sure how wrestling worked, but both feeling the joy of seeing what bodies are capable of, neither able to do much but shove the other and slip on the damp ground, just a few minutes of half-hearted wrestling and then they biked down to the weed-filled canyon out behind their housing development and dared each other to climb to the top of a cinderblock retaining wall.

Beat the Champ is a gorgeous album that sees the Mountain Goats expand themselves musically, in startling and exciting ways. Here is a jazz chord progression over brushed cymbals. Here is a track that spirals out from verse and chorus into a slow, hazy piano solo. Here are pounding drums straight from a metal record. And here, as always, are songs like no one else can write them. Like no one else does write them.
Everything I’ve said so far is true. So is this:

When my father was dying, literally was on his deathbed, although we did not know it, he and I sang songs by the Mountain Goats together.

After finishing singing one of the songs, my father leaned his head back, looked over to a beam of sun coming in from a window with a gorgeous view of the Hollywood Hills that he could not see from his bed, and said: “What an optimistic man.” He died two days later.

Nameless bodies in unremembered rooms. What an optimistic man. What an album. What a goddamn album.