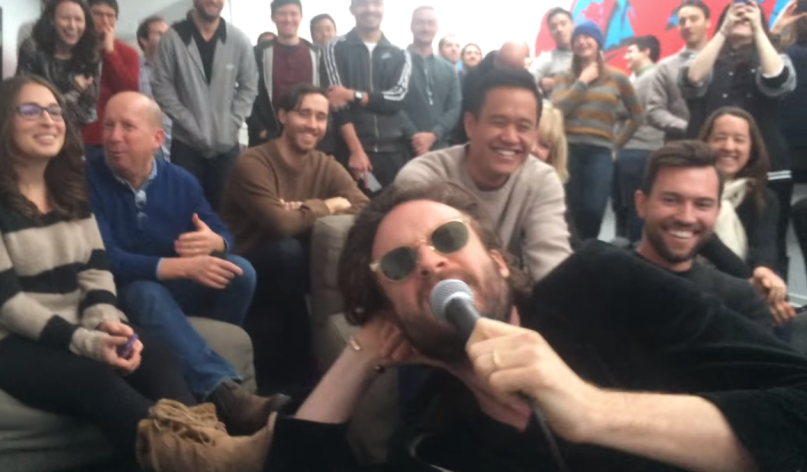 You’ve got to take your hat off to J. Tillman: On the same day he launched SAP, his own “digital music streaming service,” the man otherwise known as Father John Misty made a promotional stop at a company bound to become his biggest corporate rival, Spotify.

Of course, Tillman wasn’t there to talk synergy or negotiate buy-outs; instead, with the same kind of genius it takes to stream an album as low-grade audio files, he brought along a karaoke machine to perform tracks from I Love You, Honeybear. Bathed in fog and strobe lights, Tillman used renditions of “Bored in the U.S.A.” and the album’s title track to get quite intimate with the Spotify employees, holding hands and slow-dancing as he reworked lyrics with topical references to SAP, singer Ed Sheeran, and Winter Storm Juno. You’ve heard Honeybear as garbled MIDI, now prepare to feel it right in the ol’ heart muscle as you watch footage below.

I Love You, Honeybear will be released on February 10th via Sub Pop. Preview SAP by streaming the LP in full on Tillman’s website.

“I Love You, Honeybear”: