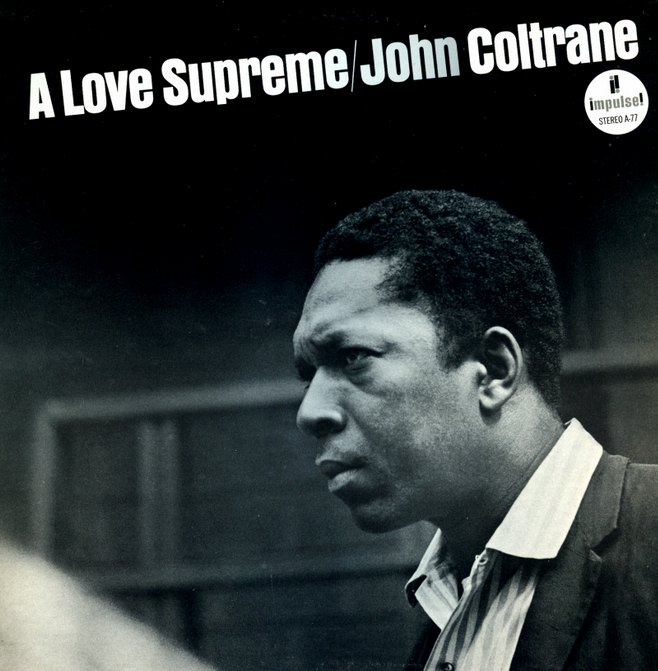 This month marked the 50th anniversary of the release of John Coltrane’s A Love Supreme, one of the most important jazz releases of all time. Featuring the essential quartet of Coltrane’s iconic tenor sax, Jimmy Garrison on double bass, Elvin Jones on percussion, and McCoy Tyner on piano, the album reaches beyond traditional greatness into a place of spiritual sublimity.

A Love Supreme taps into something incredibly human — the body feels it, moves, vibrates — but also something beyond human, stretching the mind to an ethereal realm. To anyone that’s given the record a spin, that cycle of four notes lodges into the brain and unlocks something special. For Coltrane himself, this was his paean to a supreme power, whatever that might be; it certainly has connected listeners to their own perceived version of that power. For many, A Love Supreme also opened the door to the power of jazz, of music, and of art in general. For some, despite the darkness and struggles of the world, it acted as a reminder of the power of existence itself, of the beauty of the moment despite the looming shadows.

For me, it was a mixture of all these things. Before any other genre, jazz engaged and amazed my senses, and the way the first movement, “Acknowledgement”, unfolds exemplified this. A ceremonial gong rings before Jones and Garrison’s rhythms weave in and out of each other with a deceptive fluidity. Coltrane and Tyner shift and meld and change tones and chords at what to the uninitiated sound like random intervals, but produce a magical confluence of necessity. Later, the repeated chants of the album’s title drive things into a sort of ecstatic ritual, repeating those words as an attempt to draw love and beauty and hope into the world. This is clearly music with a purpose, a message, but it also feels wholly natural and organic. I feel like nothing could do justice to explain what A Love Supreme showed me of the world, but I can say that it opened my eyes in a way that no other piece of art has.

To do what we can to honor the album, we reached out to musicians across genres to give their own thoughts and reactions. While everyone from U2’s Bono to Carlos Santana have credited the album as an influence, we spoke with a panel that includes musicians ranging from MacArthur Fellowship-awarded jazz saxophonist Ken Vandermark to up-and-coming throwback soul singer Lili K., all giving their own angle on the impact of A Love Supreme.