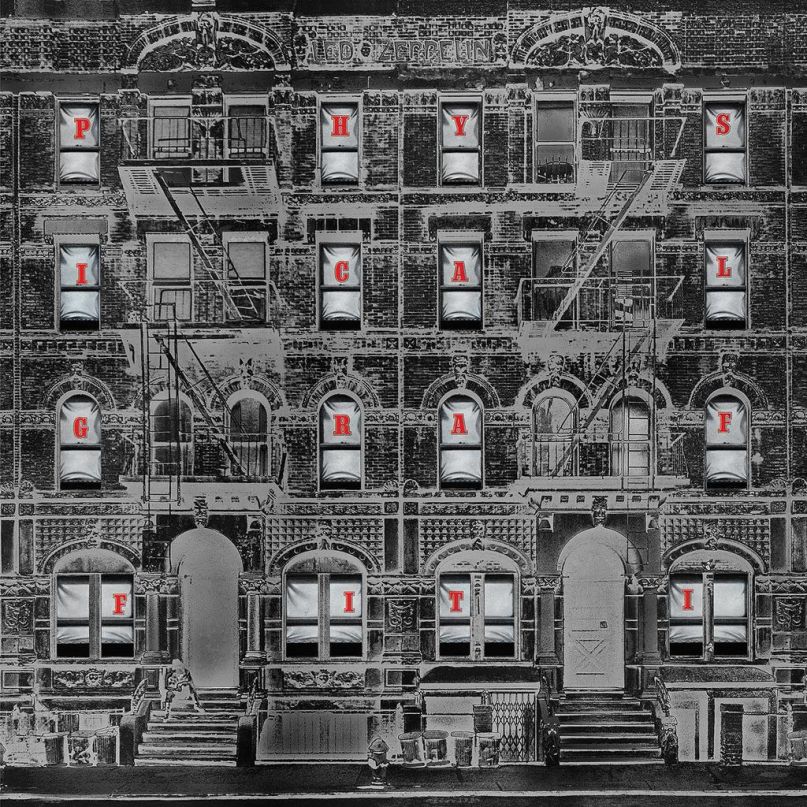 Led Zeppelin couldn’t be contained by the standard audio formats of the early ’70s. They had too many ideas, too many good songs, and no interest in leaving any of them behind. They ran the Swan Song label imprint; the standard 40-minute LP duration was of no consequence. Just make a double album.

Physical Graffiti compiles recordings from 1970 through 1974, eight new songs and seven of their strongest unreleased recordings, though you wouldn’t know it by listening. It’s constructed for continuity, and except for Robert Plant’s voice sounding deeper on the ’74 recordings, it sounds like it could’ve all come from the same sessions. It’s a sampling of Zeppelin at the peak of their powers, an embodiment of the band’s classic era, and the last classic album they’d release.

If The White Album revolutionized the double LP — the idea of an album as a sprawling, singular piece, not just a song dump — then Physical Graffiti proved that it could work as both an artistic statement and a commercial product. Typically, a band cuts material to improve a record and make it more concise. This one benefited from the excess. It can live on your turntable for days at a time because there’s just so much to listen to. Also, it increases the chances that one of those songs becomes a hit, or in this case, a staple of classic rock radio (“Kashmir”). It’s an airtight compilation brimming with remarkable performances, from John Bonham’s drumming (more experimental and jazzy, especially the fills) to John Paul Jones’ countless instrumental touches.

Bouncy opener “Custard Pie” kicks off side A with a raunchy innuendo, its closing blues harmonica solo trailing into “The Rover”, which touts some of Jimmy Page’s most underrated guitar lines. These steady rockers set the tempo and build momentum — integral when you’re trying to keep listeners entertained for 82 minutes. After two uppers, “In My Time of Dying” descends into a droning blues that sounds exactly like its title. It’s the first in a series of such tracks, all arguably among Physical Graffiti’s finest moments. The masterful run of “Houses of the Holy”, “Trampled Under Foot”, and “Kashmir” closes out the first half of the album.

Then Physical Graffiti gets weird and mysterious, but it’s this second part of the double album that cements its legendary status. There are less recognizable hits, and the mood is downbeat and meditative a la Led Zeppelin III. “In the Light” erratically builds from solo organs and doom riffs to a cheerful chorus of major scales (personally, this is one of my favorite Zeppelin songs because its arrangement shouldn’t work, but it does). “Ten Years Gone”, one of Page/Plant’s most sincere compositions, hits an emotional climax before side D falls into a loose, jammy groove, highlighted by the heavy riffs of “The Wanton Song” and the Ian Stewart-assisted “Boogie with Stu”. The album doesn’t peter out so much as it casually reaches its conclusion, the comedown after an intense journey.

Some notes on the reissue: Remastered by Page himself, this is the best digital version of Physical Graffiti available and the definitive way to hear the album if you don’t own a turntable. You can’t beat the original Atlantic/Swan Song pressings. Page produced every Zeppelin record specifically for vinyl, with warm, fat bass that emphasizes the band’s heaviness. Naturally, this is lost on digital formats. (I was sent mp3 audio for this review, so I can’t speak for the quality of the LP that was also released as part of this reissue campaign.) A third disc of bonus tracks is included, featuring an early take of “Trampled Under Foot” called “Brandy & Coke” and other alternate versions. An early version of “In the Light” called “Everybody Makes It Through” and “Driving Through Kashmir (Kashmir Rough Orchestra Mix)” provide a curious glimpse at these songs in a working stage, but overall, there’s nothing we haven’t already heard in some form or another. Zeppelin had no interest in leaving anything on the cutting room floor — the whole point of Physical Graffiti being a double album — so there’s no worthy studio material left in the vaults outside alternate takes and rough mixes that serve no practical purpose for the common listener.

Essential Tracks: “Everybody Makes It Through” (“In the Light” early version)