The Districts – A Flourish and a Spoil 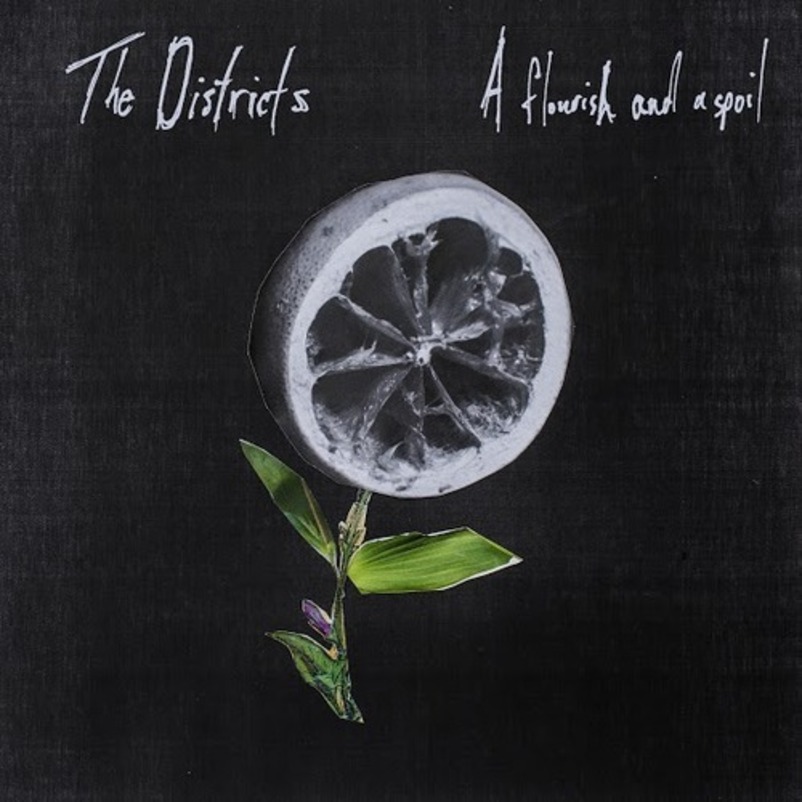 There’s always been something compelling about The Districts, even though the band doesn’t have a particularly interesting backstory. The four-piece, which consisted of vocalist/guitarist Rob Grote, bassist Connor Jacobus, drummer Braden Lawrence, and then-guitarist Mark Larson, started out, like most young acts, as a high school band that played classic rock covers. It’s a completely by-the-numbers origin story, which is totally fine, because these indie rockers aren’t concerned with anything other than just making music and being damn good at it.

Based out of Lititz, PA, a small town where there wasn’t much of an infrastructure for aspiring rockers, The Districts began to get better, playing shows in gradually bigger venues from local burrito shops to venues outside of Lititz, in Lancaster County and even Philadelphia. In 2013, the band released their ramshackle but promising debut album, Telephone, which featured what’s arguably their most well-known song, “Funeral Beds”, a folksy track that slowly builds to a boil with an emphatic vocal performance from Grote. Just two weeks before they were supposed to start college, they signed with Fat Possum and decided to be The Districts full time.

Now, after a CoSign-worthy 2014, complete with a stellar EP, a series of excellent festival appearances, and tangible buzz, the band delivers on its initial promise with an excellent sophomore effort, A Flourish and a Spoil. Armed with a new guitarist in Pat Cassidy, who replaced the college-bound Larson, as well as an esteemed producer in John Congleton, who worked on a wealth of amazing albums last year (including St. Vincent, Swans, and Strand of Oaks), the LP is boldly ambitious and effectively channels the band’s recklessly energetic live show.

As a producer, Congleton excels at helping bands add power and distortion to beef up songs. A Flourish and a Spoil boasts an approach similar to his contributions on Angel Olsen’s Burn Your Fire for No Witness, which found the folksinger experimenting in more rollicking, fuzz-laden territory, and that choice is just as effective here. From the blown-out fuzz squawk guitar tone on “Peaches” and “Young Blood” to the lush, reverb-filled riffs of “Chlorine” and “Heavy Begs” or the staticky, lo-fi atmosphere on acoustic offerings “6AM” and “Suburban Smell”, the music here is muscular and abrasive but simultaneously accessible and well-constructed. There’s a vigor that overpowers the music when Grote yells at the climax of “Hounds”; it’s such a visceral and immediate yelp that you can practically feel his sweat and spit. More than anything, Grote’s a very physical presence on the record. When he sings, he’s got nearly enough power to outshine the roar of guitars behind him.

Lyrically, the album is a perceptive and unrelenting look at growing up in a shitty town, leaving that shitty town, and trying to figure everything out in the process. Grote is an incredibly vivid and symbol-heavy storyteller, using loads of abstract metaphors and dense nature images. “I don’t want to sing about the peaches in the Vatican/ And I don’t want to hear about the bird on the hill,” he sings on “Peaches” and, on “Sing The Song”, “Don’t just sing along dear, your bitter heart once shook with vigor now/ Pluck it from the stem when it’s drunk on dew.” A student of poetry no doubt, Grote manages to pack his teenage angst into something quite pretty and even empathetic, which is where he really thrives. On “Suburban Smell”, Grote sees bullies tormenting a kid with an intellectual disability and sings in disgust, “I am not like them, I am not like them.” It’s tough growing up in a dead-end town surrounded by cruel people who make you feel alienated, but Grote manages to capture that sentiment without making it overbearing.

Each of the album’s 10 songs are fully formed and smartly rendered, but “Young Blood” stands out as the most jaw-dropping. Spanning nearly nine minutes, it’s a track that constantly unfolds on itself, transforms into something else entirely, and repeatedly surprises over its elongated runtime. The first half of the track is punctuated by interlocking guitar riffs and a straightforward song structure, while the second half unfurls into a total jam. It slowly builds from a subtle bass line to a cascading guitar part to a feverish instrumental freak-out seemingly inspired by some of Built to Spill’s most arresting jams. With all those pieces in place, along with Grote’s fiery delivery, “Young Blood” is one of the most well-executed rock songs in recent memory. While it’s tough to match a song like that, they get damn close on the twangy “Peaches” and the showstopping “Hounds”.

Though arguably more than deserving of the fame and radio play enjoyed by bands like Black Keys and Kings of Leon, The Districts likely won’t end up taking that path. So far in their career, they’ve only just been a band: just four high school friends deciding to make music and hit the road. There are no pretensions, no chance of headline gimmicks, just four humble and incredibly young guys who are also quite talented. In many ways, their unfussy approach to being a band translates to their music. Despite some of the fuzz and purposefully lo-fi studio tricks, they let the songs speak for themselves. As A Flourish and a Spoil proves, that’s all they need.