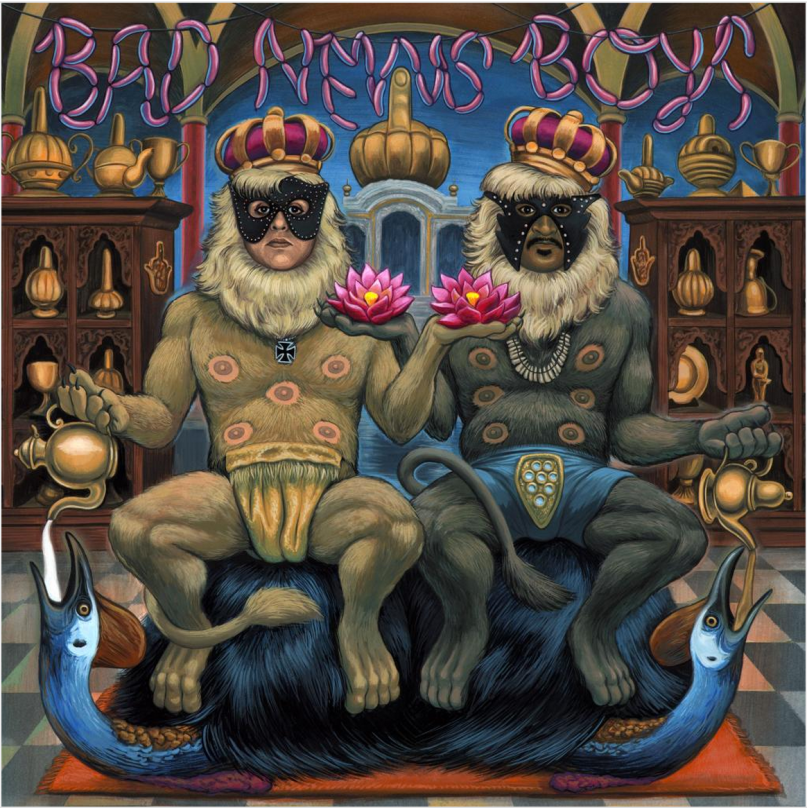 Whether alone or together, King Khan and BBQ dole out sweaty, dedicated subversion of ’60s garage tropes with a mischievous wink and a waggle of the hips. They’re the guys who want you to “Treat Me Like a Dog”, who wish they had “Tastebuds” on their nuts, who have an “Animal Party” with a bunch of zoo guests “doin’ the such-and-such,” all delivered in pitch-perfect, lo-fi shimmy and shake. They’ve also penned some gems that’d pass on golden-era AM radio without needing to change up the lyrical content, though. Whether in their explosive personal history or their manically diverse records, The King Khan & BBQ Show do whatever sounds like fun in the moment. And that’s why there’s a mush-mouthed tune called “Snackin’ After Midnight” and another with the screamed chorus “diarrhea fuck off” on their latest LP, the appropriately titled Bad News Boys.

These two are garage rock lifers, having worked in various corners of the genre going back to the late ’90s and their shared time in Montreal’s Spaceshits. As such, they’re seemingly incapable of putting out a bad album, but they also need to work hard to change up expectations. So, that scatological chorus to “D.F.O.” works here as a change of pace when surrounded by the BBQ-crooned breakup ballad “Buy Bye Bhai” and the slow groove of “We Are the Champion”.

Logically, the sincere harmonies and lyrics of “Never Felt Like This” (“dream about the dance that we had and wonder about the chance that we took when we first kissed”) should stand miles from the goofy simplicity of “Snackin'” (“a-crunch-crunch”), but Bad News Boys puts a single song between them — a road-running charger about “Killing the Wolfman”, no less. And all three of those songs are played with the exact same gusto, the true strength of the King Khan & BBQ Show. That gusto works best live, and these songs should prove just as viable when the guitarists hit the road. For now, though, Bad News Boys fits into a long string of solid garage samplers from these two maniacs.

Essential Tracks: “Snackin’ After Midnight”, “Buy Bye Bhai”, and “Never Felt Like This”