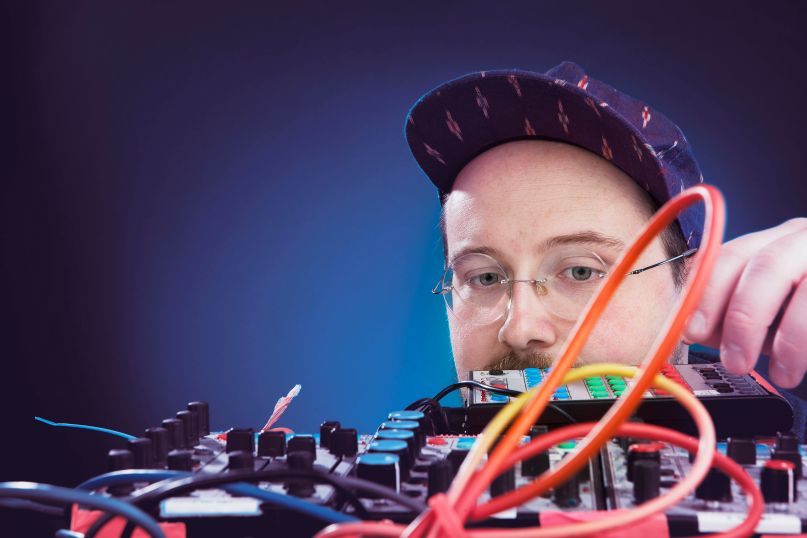 Artist, composer, prankster, madman, genius. Dan Deacon is an electronic music producer and performer with a rock and roll heart. He embodies the post-modern crisis in production: a multivalent artist whose work exhibits no boundaries and phases in and out of any genre or style restriction thrown at him.

Deacon cut his teeth in the early 2000s filling Baltimore warehouses with a unique blend of party-friendly electronic dance music that never strayed far from his background as a contemporary classical composer. In the ensuing decade, he has produced over eight albums and a variety of singles, remixes, EPs, one-offs, and collaborations.

As we near the release of his ninth album, Gliss Riffer, we take a moment to look back upon the weird, divisive, occasionally hilarious, and ALWAYS danceable career of the inimitable Dan Deacon. Gathered here are 10 tracks arranged to provide listeners, both new and old, with a survey of the complicated aesthetic imagination and motivation that have earned Deacon a place as one of the most influential, and enjoyable, composers/producers/musicians working today.

Anyone who’s been to a Dan Deacon show will tell you the same thing: you need to see him live. Deacon is a pro at stirring up a PG drug-like frenzy fit for Nickelodeon, getting the crowd involved in call-and-response games while he performs his material. His “let loose” numbers, where he encourages everyone to dance nonstop, even if it means running in place, are the easiest. “The Crystal Cat” will forever live at the top of Dan Deacon’s catalog for that reason.

Back when Dan Deacon would perform with two drummers, “The Crystal Cat” was a rush of endorphins. The song was a race between the two. Who could hit the bass drum fastest? Who could slip in the most drum rolls between downbeats? How was Deacon putting this many blips into a single second while screaming his head off? He would later go on to drop “Woof Woof” and “Guilford Avenue Bridge”, both of which bounce while sucking helium from balloons, but nothing matches the unfathomable fever of “The Crystal Cat” live. There’s something about the song’s utter chaos that encourages the most reserved people to dance like they’re in their bedroom — and love every second of it. –Nina Corcoran

For all the twisted, unnatural sounds yanked from broken electronics and delivered at terrifying tempos, it can be easy to forget that Dan Deacon is a self-avowed “pop musician” at heart. On rare occasions, he will let the physics-defying hysterics fall away and instead deliver a song that travels straight to the pleasure zones of the brain. On “Learning to Relax”, he front loads the verses with a soothing, charming melody that takes the edge off the breakneck tempo. Deacon is far from a good singer, but perhaps no artist gets more from less. He’s a master of using the tremendous electronic array at his fingertips to filter his voice into pleasing tones. “Learning to Relax” is a fun listen from beginning to end and a recent indicator that, as an artist, he has learned to combine his sometimes-opposed desires to experiment and please into a coherent whole. –Kristofer Lenz

Enter the world of the disklavier. The player piano that can process mountains of midi data and spit out notes with inhuman pace and cadence. That idea is precisely what drew Deacon to purchase two of the behemoth instruments. Deacon’s vision of the device’s capabilities has become integral to his sound and is shown as shimmering undertow on “Build Voice”. The crescendo at the end of the track shows just how far the instrument can be taken. It’s a far cry from the hotel lobbies where one might normally locate a disklavier.

When we reflect on Dan Deacon’s career some years down the line from now, that ability should be touted as his most important. He is a man with vision. He’s challenged the subjugation of audience to artist. He’s created phone apps facilitating those same egalitarian performances. Even simply finding new ways to make avant-garde music in pop form. With each new experience, Deacon seems to make connections that most don’t see. Perhaps in another life he might have done well as an inventor or entrepreneur. –Kevin McMahon

Dan Deacon’s background and education as a traditional composer is always apparent from his densely layered and beautifully arranged tunes, even when they seem pop-infused or chaotic. In recent years, he has flexed this structural muscle in collaborations and performances with contemporary groups like Bang on a Can and So Percussion.

At the heart of 2012’s “America” is the four-part long-form composition made up of “America I: Is a Monster”, “USA II: The Great American Desert”, “USA III: Rail”, and “USA IV: Manifest”. Elevated by live strings, percussion, and choral work, this masterwork effectively conveys Dan Deacon’s most poignant political statement today. Via a soundscape as grand as the nation itself, we hear tell of the inherent conflict of living while aware in America. To live in this land of (seemingly) infinite promise and freedom, we must also navigate a dark history (and future) of excess, exploitation, and worse. –Kristofer Lenz

Remix Better Than The Original

Carly Rae Jepsen’s “Call Me Maybe” was nothing short of inescapable in 2012. Most people fell into one of two camps: advocating for the song’s pop perfection or wanting to scream every time it came on the radio. Something so divisive is hard to improve upon, but Deacon was able to in the most simplistic way possible.

By layering Jepsen’s a capella vocals 147 times over, the track quickly takes on a haunting new light. With each new “I threw a wish in the well,” the tension rises. The vocals start to take on their own propulsive rhythm. It’s a laissez faire approach with Deacon letting Jepsen’s original melody do most of the work. Eventually he slowly starts to distort the vocals, letting them deteriorate. It’s like a pop version of William Basinski’s The Disintegration Loops confined to four minutes. –Dusty Henry

“Unedited Footage Of A Bear”

Deacon’s unique skill sets as both a composer and avant-garde electronic musician make it only logical that he’d dabble in film and television scoring. In 2011, he teamed up with Francis Ford Copolla for the horror flick Twixt, but one of his more recent works feels most true to Deacon’s aesthetic.

As the follow-up to Adult Swim’s viral “Too Many Cooks”, Deacon scored an even more unsettling short entitled “Unedited Footage of a Bear”. The video starts as an upbeat parody of antihistamine commercials, but quickly devolves into a disturbing, surrealistic crime drama of a woman getting attacked by a demented clone of herself. It’s prime territory for Deacon, who relishes in the weird. His score never overplays its hand, complementing the visuals with devilish glitches and frightening horns and drums. Over the course of 10 minutes, he’s able to create immensely discomforting atmosphere with very few moving parts. It’s a testament to his self-awareness of less being more and weirder being better. –Dusty Henry

Dan Deacon’s got a whole bag of crazy covers, but perhaps the most perplexing of all is his take on Miley Cyrus’ “We Can’t Stop”. The teen queen’s slow dance track gets shoved onto the dance floor and dumped in glittery glowstick slime. The party anthem becomes a real party anthem, all because of his gift with a scalpel. The “50% Reduction (Straight Chop Remix)” cuts away half of the material; not a single thing was added.

By swinging his electronic blade down, Deacon is able to demonstrate how his mind works and what his ears hear by revealing the song’s buried core. There’s silliness in everything, at least when you’re looking at the world through Deacon’s eyes. Cyrus starts blurting out unintelligible gibberish and harmonizes coolly in the background. The bass thuds like a bro pounding on the front door. Deacon hears the potential for a party in the midst of a prom song. When a Mike Will-produced track can flip from pure pop R&B to chaotic dance breaks, you realize it’s a lot harder than it seems to make something out of nothing, especially an unstoppable twerk. –Nina Corcoran

Combine sped-up, Chipmunks-esque vocals, skittering marimba tones, and a chorus built around a ride cymbal pounded over and over. This is the recipe of a nightmare sequence scored, not a catchy, dance-friendly jam. Somehow, Dan Deacon, in his madman’s wisdom, manages to make the aforementioned palatable, downright charming even. When in the middle passages everything falls away and the marimba and drum riff jab and shift as new melodic tones rise and fall, a sense of anticipation builds … until we can’t wait for the psychotic choral of spun-out kid voices to return. The ensuing sonic barrage is downright refreshing. This should not work. It does, though.

Long known for his dense, abstract layerings, it’s nice to know Deacon can pull back. “Slow with Horns” is an example of the artist’s melodic prowess. He peels away the electronic shmorgishborg to reveal fluttering piano bytes that simmer up and down. Add in the undertow of slow, undulating ambient tones and we find ourselves in the midst of an emotionally powerful track.

It’s hard to quantify an artist of so many speeds and directions. Much of Deacon’s activity feels more wave than particle, but in a world without duality, “Slow with Horns” shows the musician in a known time and place. It’s dynamic, but foregoes his standard abrasion and instead assumes a ballad-esque format. Yet another feather in the ever-expanding cap of Dan Deacon. –Kevin McMahon

Like many things on the internet, “Drinking out of Cups” from 2003’s Meetle Mice is not exactly what it appears to be. Yes, it features a lizard from Long Island that loves seahorses, but much to the disbelief of the YouTube comments section, a drug frenzy did not lead to its conception. Instead, it serves as a point of insight into the Baltimore producer’s twisted-prankster aesthetic.

From the video and Deacon’s response to its attention, we witness both his famed humor and the compos mentis he carries towards his artistry. The lizard’s hilarious diatribe is actually a sober parody — constructed by Deacon — of Long Island stereotypes. While this may be hard to believe for outsiders, spend any time in Deacon’s world and the leap is not so great. It’s an important sentiment to consider when observing the swirling chaos that embodies his work. Deacon knows what he’s doing. He has great intuition and the guile to challenge the praxes of performance and recording without fear. All with the scatterbrained humor that makes him so lovable.  –Kevin McMahon