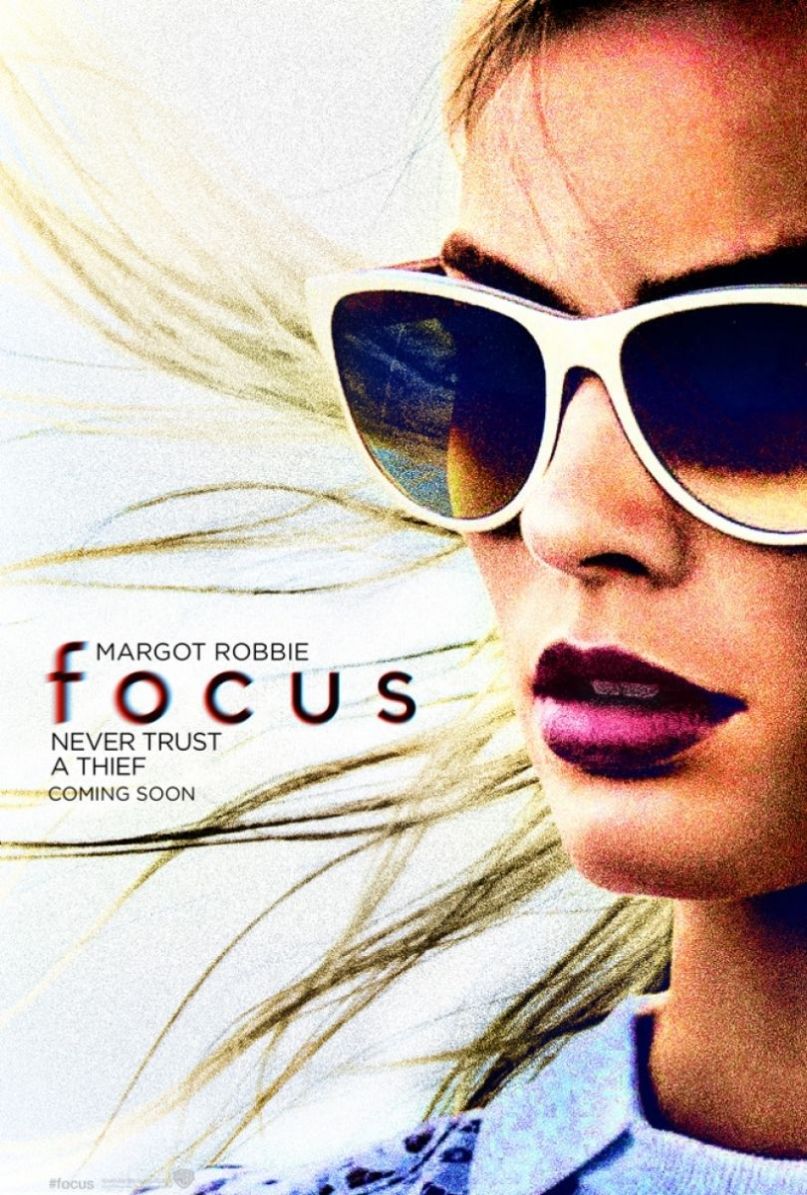 In the closing credits of Focus, there’s a title for “Con Artist Adviser / Pickpocket Design.” What a neat job. You get all of the glitz and smart-ass theatrics without any of the shady morality of actual hustling. You get to legalize the illegal for the sake of art. And yet, that’s kind of the problem at hand with Focus. It’s controlled, guarded, and most bogus of all, expected. But hey, if you know you’re gonna get rooked, you might as well enjoy the show. At least Focus puts on a swell one.

Glenn Ficarra & John Requa’s Focus is a flash-in-the-pan comi-caper. You know and expect that the cons will come, just not when. You’re waiting for the double crosses, just uncertain who’s gonna pull ‘em. You expect the sheen and attitude of a con artist film, the kind that reminds us that crooks and schemers are cooler than school. Even when Focus successfully dupes its characters, it’s all but foregone. Focus, to its credit, does it with style and pop. It carries itself with strong, charismatic leads, twinkling just enough to remain entertaining.

Focus is about Nicky and Jess. Keep in mind, describing a film about grifters could more or less be considered spoilery, since it’s always about withholding the reveal, so we’ll focus on the film’s Gondorff and Hooker of 2015. They’re the focus, anyway. Margot Robbie is Jess, the promising, opportunistic crook just looking to make a buck. With her huge eyes, purring voice, sleek features, and effortlessly demure qualities, she’s a total femme fatale. She just doesn’t know it yet. That’s for Nicky to (sort of) realize for her. Will Smith, making a bid at a comeback, lays the favorites. He reclaims his old swagger and confidence, and as a bonus, he deconstructs his 20-odd years of onscreen cockiness. Smith’s Nicky is a seasoned vet, one that actually looks and acts like he’s worked incredibly hard to be the man he is. His smooth operation likely took years of sanding. They’re both good thieves, charming and snappy. Nicky takes Jess on, academically and intimately.

They start small, with Nicky showing Jess the ropes in New Orleans. He makes her part of his enormous team of 9-to-5 crooks. In Focus, there’s room for an extended universe of sneakers with unique skills or tools, and more accurately, quirks that lead to one-off gags. Jess gets the basic stuff: pick-pocketing, confidence, how to boost a watch or ring and not get caught. Nicky loves teaching her, taunting her by always being one step ahead. Jess just gets a kick out of the whole endeavor, and may actually have a thing for Nicky. Focus, however, has a problem getting us to buy this romance. It’s a con film, so these two are supposed to be playing each other, right? Right? But trust issues aside, once you come to terms with the inevitable zig-zaggery, you can dig on these two leads. For a series of jokes and cons, commercially realized, Smith and Robbie scintillate throughout, especially Robbie.

Robbie has the makings of a swanky leading lady here, and she’s more than capable of handling Smith’s pageantry. She shows him up, proving she’s one to watch out for. For all the press she generated while getting objectified in The Wolf of Wall Street, Focus gives her terrific, and much more interesting, things to do. She looks good stealing stuff on Bourbon Street. There’s something so natural about her hitting Will Smith with a smile on her face as she cusses a blue streak. It’s a breakout turn for sure.

The movie almost feels like a ‘60s caper with European style. Cross-cut sexy times and surprise music cues? Clever car photography and cutesy one-liners? Presumed cliché soundtrack choices that actually make for sneaky plot points? Focus deals in fancy liquor marketing aesthetics, built on suave and occasionally naturalistic imagery. If we’re to look at Focus for the qualities of its con, it’ll earn your wallet, and you’ll be totally okay with that. Ficarra & Requa (the writing partners from Bad Santa who made a splash directing Crazy, Stupid, Love.) may have heavy hands, but they still manage to get away with some sleight of hand.