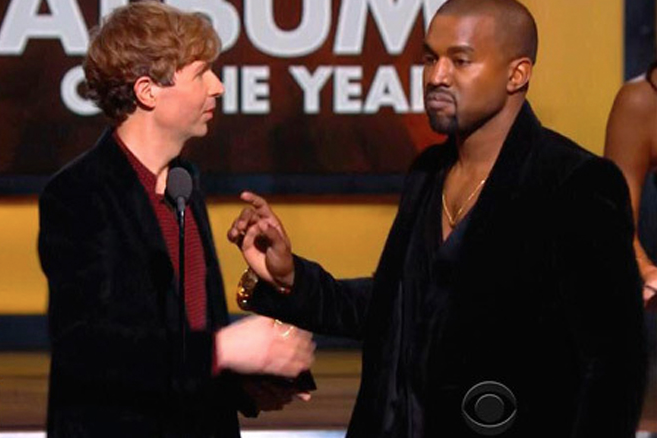 Kanye West has taken to his Twitter account to publicly apologize to Beck for his behavior and comments at this year’s Grammy Awards.

As you’ll recall, West walked up on stage while Beck accepted his Album of the Year award, apparently ready to interrupt his speech as he had done years before to Taylor Swift at the MTV VMAs. Though he waved off the incident with a smile, he later commented that “Beck needs to respect artistry and he should have given his award to Beyoncé.”

Now, the controversial rapper has reached out to make amends:

I would like to publicly apologize to Beck, I’m sorry Beck.

For his part, Beck was never too offended by West’s actions. “I was just so excited he was coming up. He deserves to be on stage as much as anybody,” he told US Weekly.

But West wasn’t done; he went on to apologize to Bruno Mars, whom he has repeatedly dissed in his infamous live show rants. He even offered Mars a spot on a track produced in collaboration with Puff Daddy and 88 Keys, which apparently has Tyler, the Creator lined up to direct the video!

I also want to publicly apologize to Bruno Mars, I used to hate on him but I really respect what he does as an artist.

I also would love for Bruno to sing this hook on this song 88 Keys / Puff and I produced… I even asked Tyler to shoot the vid.

Add this to his tear-inducing interview with Zane Lowe that premiered earlier today, and it’s like we’re seeing a whole new Yeezus. To celebrate all the positive vibes and feud ending, revisit Win Butler’s mashup of “Loser” and “Jesus Walks”: