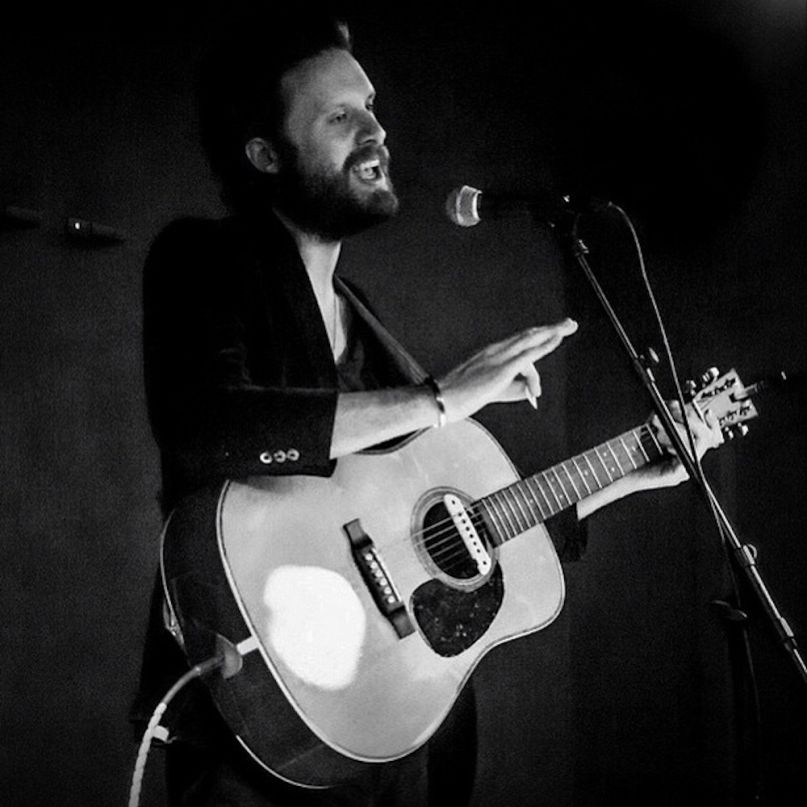 Josh Tillman, better known as Father John Misty, has the type of public persona and onstage demeanor that renders him a less than ideal candidate for a performance at a 50-person event filled with what the singer deemed, in jest, “high-powered VIPs” (though, for corporate events, there’s fatherjohnmisty@gmail.com). His secret show at Virgin Hotel Chicago Saturday night recalled the acoustic tour Tillman embarked upon last winter, when he ditched his full band and signature dancing for a stripped-down show with tongue-in-cheek gimmicks like a giant iPhone cutout that lowered from the ceiling to give the crowd a frame most create for themselves anyway. Saturday night lacked props or commentary on our modern tendency to live life through screens; Tillman stood on a tiny stage just a foot off the ground with no more than a guitar and a few bottles of water. With pipes and songwriting chops like his, that’s really more than enough.

The room housed giddy, genuine fans excited to have scored an invite to the intimate event along with those who were perhaps hearing his music for the first time. The latter half seemed to reveal themselves with the kind of laughter that only surfaces upon hearing “Bored in the USA” for the first time, or lyrics like, “Try not to think about/ The truly staggering amount of oil that it it takes to make a record.” That second line came with a wink and a hat tip, as Virgin Hotels made the night happen in conjunction with Vinyl Me, Please — a record delivery service whose monthly subscribers get an album with original artwork and an accompanying cocktail recipe in their actual, physical mailboxes each month.

The experiential music company, which sent email invites to lucky members just days before the show, named I Love You, Honeybear its current record of the month, deeming it “one of the most poignant and honest love letters of our generation.” That sentiment came to life Saturday night as our ears feasted upon songs like “I Went To The Store One Day”, which recounts the tale of how Misty met Mrs. Tillman outside of a glorified liquor store in Laurel Canyon, and a stripped-down version of the whimsical “Chateau Lobby #4 (in C for Two Virgins)”, which bottles the electricity that powers the early stages of love.

Tillman also dipped into his psilocybin-fueled debut Fear Fun, honoring audience requests from the few die-hards in the room, and played well beyond his assumed 10 p.m. cut-off. After 16 songs, including a two-song encore of Leonard Cohen and Dory Previn covers, the man who calls himself Father John said, “It’s been grand.” He followed with an assurance that he meant it sans sarcasm, and that his voice just comes off that way.

Perhaps it was his wife Emma’s subtle presence at the back of the room on a corner barstool or the warm reception that followed every track or the fact that the world is finally seeing J./Joshua/Father John Misty as he truly is (thanks to a series of intimate profile pieces), but it turns out the man and the myth make the perfect performer for such a show. Tillman lovingly delivered his cheeky-turned-earnest music without a care for the Instagram content creation happening in front of him or the reasons that brought him to the stage.

Setlist
I Love You Honeybear
The Night Josh Tillman Came Into Our Apartment
I’m Writing a Novel
Strange Encounter
Nothing Good Ever Happens at the Goddamn Thirsty Crow
Only Son Of A Ladies Man
Hollywood Forever Cemetery Sings
Chateau Lobby #4 (in C for Two Virgins)
Holy Shit
Bored in the USA
Well, You Can Do It Without Me
Now I’m Learning To Love The War
I Went To The Store One Day
Funtimes in Babylon
Encore:
Bird On The Wire (Leonard Cohen cover)
Lady With The Braid (Dory Previn cover)