Shampoo at 40: Sex and Nixon and Beatty’s Big Hair 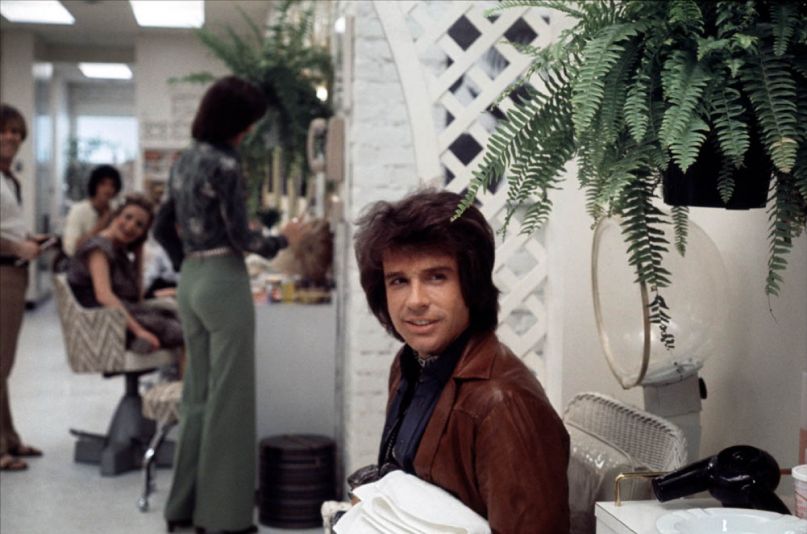 And the moment Richard Nixon was elected President, the notions of free love and sex as fun up and died. Think about it. In the ‘60s, you had your pervasive sexual courage and free-spirited love. It was a decade of pure optimism and exploration. The Age of Aquarius! Love-ins! Even the President was kind of sexy, in a Boston-baked playboy sort of way. There was nothing we couldn’t get away with, baby!

Then, 1968. Nixon. Sweaty upper lips and paranoid emotional politics. It wasn’t just his character that people noticed, but the sexual mores of America changed, more or less going soft. Safe. Boring. Repeat. Yes, it’s weird to intimate that the President killed sex, but he was the figurehead of a changing ideology in the States. He gave way to key parties, swinging, and other such closed-door sexual encounters. And there was always the lingering fear that someone was gonna get hurt (Hello, Charles Manson? Hello, Altamont? Hello, dangers of unchecked sex and drug use?). It wasn’t just the sex, though (although that’s important); it was a complete change in the zeitgeist, and Nixon screwed everyone.

That’s at least the argument that Shampoo gets at. (Or rather, the elongated euphemism.) I mean, Warren Beatty’s big-haired beautician George Roundy screaming that all women have been “fucked over” by some guy is not subtle. One guy always does. But that’s the joke.

It’s the 40th anniversary of Hal Ashby’s Shampoo, and what better time to talk about what we do in the bedroom than on Valentine’s Day weekend? It’s a cheeky tapestry: a ribald-looking comedy about a Jon Peters-like hairdresser with a propensity for sticking his pecker into anything. But he loves ya, baby, really, you’re great. He continually assures us so.

As an R-rated comedy, it’s dirty and dippy, and it’s dated like you wouldn’t believe. (Oof, the bell-bottoms, the feathered ‘dos, the use of The Beatles on the soundtrack before that was an outrageous and expensive proposition.) But that’s just the vanity-level premise. Shampoo was a pointed indictment of Nixon and the changing of the tide in America. It’s about the loss of sexual innocence and goes right along with more direct fare like Ang Lee’s The Ice Storm or cerebral romps like last year’s Inherent Vice. Free love and open-mindedness dissipated in the early ‘70s, and Shampoo may have been the first, and funniest, film to say that. Hal Ashby, Warren Beatty, and Robert Towne came up with a naughty comedy of manners and sexual politics. Oh, the plight of manipulative white men.

On the day of the 1968 presidential election, George Roundy’s just looking for business. He’s trying to find all sorts of strange bedfellows, from bankers to businessmen to campaign contributors, and really just a whole lot of women. This is Warren Beatty here, in peak superstar mode. He does loads of ladies’ hair, then does them, always with proficiency. He’s all for sexual commitments, not emotional ones, as he rides around the hills on his Triumph, from one pump to the next. It’s become such an afterthought for Roundy that he doesn’t even try. He has a beautiful head of hair (with little happening inside) and pointed facial features, and he’s an absolute sexual dynamo. He just doesn’t have to ask. As he says, he just likes to have sex. It doesn’t matter with who. Maybe he’s not the brightest bulb, but somewhere inside all that sprayed hair is the genius idea to work in a profession where he can meet lots of women. In a modern context, it’s extremely devious, but this was the ‘60s. Imagine: the worst thing you’d get after unprotected sex was a smoke and maybe some penicillin.

In 24 hours, George will sleep with approximately three, no, four women? He’ll witness the consequences of these pump-action segments of his day, at last. George learns that actions have consequences,and that’s he’s actually hurting everyone around him more than he ever realized. It’s a bitter pill, but one that we swallow with amusement and melancholy. So long, fun sex. Hello, problem sex.

It was provocative then, and it’s just as provocative now. It’s also extraordinarily heavy-handed, not just splitting hairs, but burning them, often and accidentally. Shampoo is still a modest comedy. A brazen one, but still mannered. For a movie that’s sex sex sex sex sex, Shampoo is modest in both sexuality and comedy. It feels soft by modern standards and especially by ‘70s mainstream cinema standards. As a political farce, it’s forceful, to say the least.

In one instance, Roundy’s on the verge of nailing Jackie (the insanely beautiful Julie Christie, demeaning herself as a sex toy for her then-lover Beatty). George just came over to do her hair, God’s honest truth. Jackie’s the mistress of Lester (the singular Jack Warden), a potential bankroller for Roundy’s dream salon. Lester is married to Felicia (Lee Grant, in a mouthy, fun, Oscar-winning role). George is seeing Felicia on the regular. Still with me?

George, while doing Jackie’s hair, is overcome, and the two begin to go at it. Steam is everywhere. George undoes Jackie’s skimpy towel. But the fling is interrupted by Lester, because he comes home while George and Jackie, are, as they say, teasing each other’s hair. To save the situation, Jackie and George devise a quick scenario to fool Lester. We assume Lester will walk in on sex, but instead he sees George blow-drying the mistress’ hair, assuring Lester that the steam is good for her. Lester, naturally, buys it. Lester thought George was gay anyway, you know, because of the hairdressing. Oh, to be naïve. It was a simpler, more trusting and gullible time.

It’s a cute moment, a momentary cling to protocol and decorum before everyone gets the big hurt. That’s Shampoo’s best and most lasting quality. Watching the stuffy Lester, in a bad wig, try to join in on a hot tub party is hysterically awkward culture clashing. Watching a young Carrie Fisher hit on George and make sex (consensually, but probably as statutory rape) a thing of clinical boredom is still wild to comprehend. George’s naturally beside-himself demeanor is milked by Beatty for maximum comic effect. It takes him forever to catch up to the now.

Granted, the film still spells its points out excessively. “Face it, they know we’re always trying to nail ’em, and they don’t like it. They like it. and they don’t like it. It’s got nothing to do with you, Lester. It just happened.” It’s like watching a fraternity brother suddenly realize that women don’t like to be manipulated; it’s so pitiful. The setting and monologues dumb down the message; we’ll blame that on Beatty’s writing. He was an outspoken man, but still kind of shallow and a vanity-driven movie star. Could the repeated use of “Wouldn’t It Be Nice” be any more obvious?

In the end, Shampoo stayed in the mainstream consciousness for its pushy material and the talent that looked to sell it. If there’s one great takeaway from the film that holds up today, it’s to never trust the man and never get taken for a ride. Especially by your hairdresser.