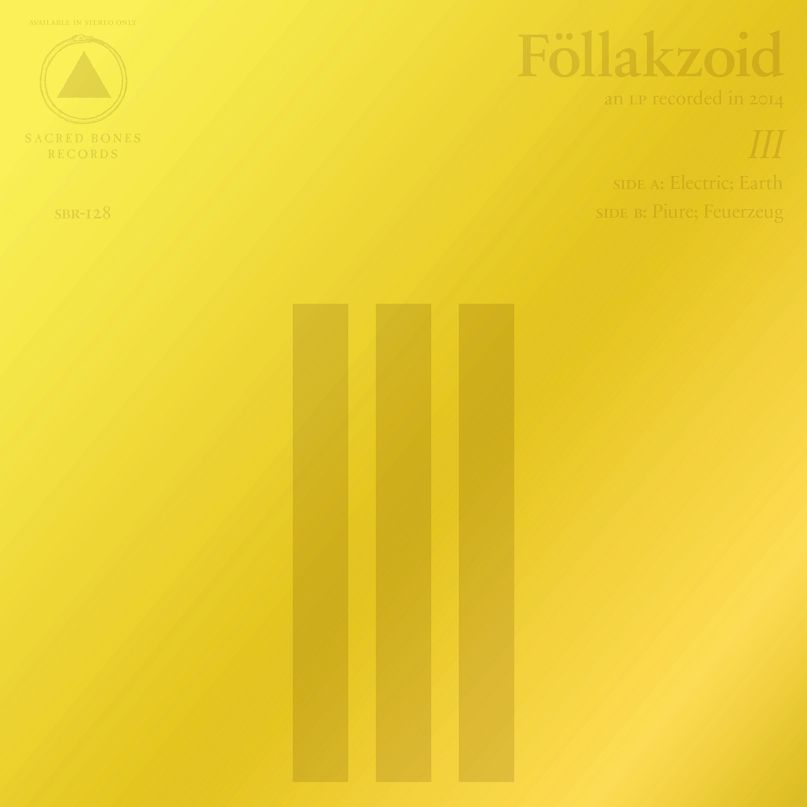 Sometimes it’s less about the destination than the journey. It’s a nice thought, albeit one that’s largely been forgotten in an internet age where immediacy is everything. Who has the time to dig into any one song, record, or artist when the next big thing is always dangling like a carrot just out of the reach of hungry music fans?

Patience for music is dwindling, which in some respects makes Föllakzoid a band built for simpler times. Rather than zapping listeners’ pleasure centers with fat, catchy choruses, the Chilean trio treats its psychedelic stew of dance, trance, and krautrock like a fishing expedition. They’re perfectly satisfied with casting a line downstream and following it wherever it takes them. Such has been the band’s MO on past outings, and their latest, III, doesn’t break from their taste for a good musical trip. The record is broken into four lengthy, freewheeling blasts of hypnotic psych pop that uncoil and reveal themselves at an almost glacial pace, but it’s a lot of fun to get lost in the expanse when you give in to the urge.

The 12-minute opus “Electric” sets up the record’s groovy, nomadic feel, and the remaining three tracks follow behind in perfect step. The guitar experimentation of “Earth” sounds like Sonic Youth’s stab at a twisted dance record, while “Piure” is a trip down a shoegaze rabbit hole accented with lush world music flourishes. III wraps with “Feuerzeug”, a Can-inspired krautrock dance party.

III is a slow, methodical record that commands listeners’ full attention, but it rewards the investment. Föllakzoid have further reiterated their point that music needs to be heard and felt in full to be understood. Here’s hoping fans glom onto the message.