Kendrick Lamar – To Pimp a Butterfly 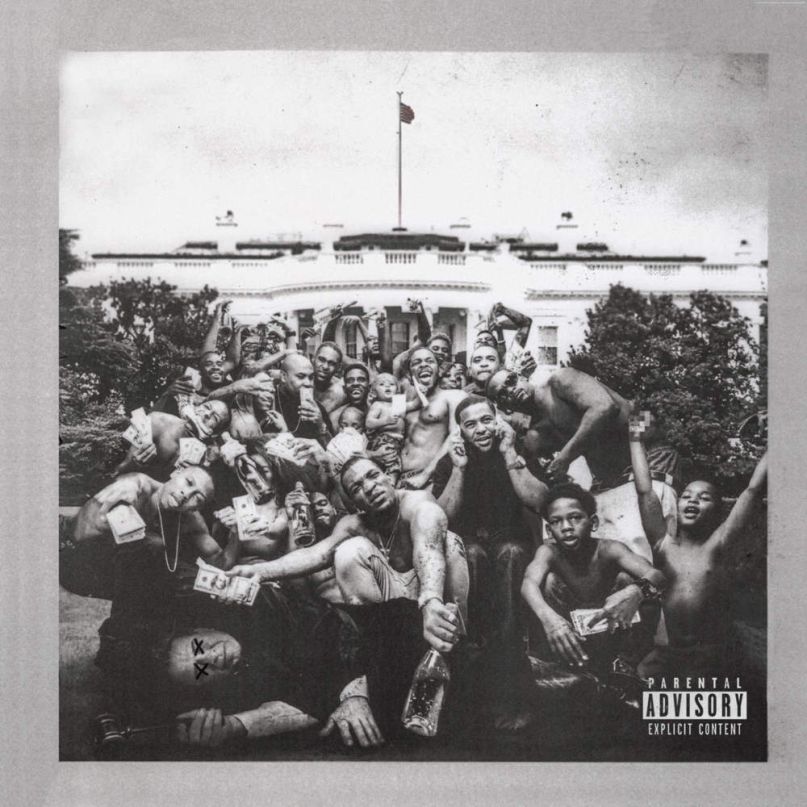 In piecing together his new album, Kendrick Lamar left certain things behind. The 27-year-old Compton rapper has largely abandoned contemporary hip-hop structures in favor of a cosmic splat of jazz, soul, and funk. He’s said goodbye to his peers in Black Hippy and, with the exception of Snoop Dogg’s Slick Rick impression on “Institutionalized” and Rapsody’s pro-black verse on “Complexion (A Zulu Love)”, the need for guest rappers. Sometimes, he even sets aside the act of rapping entirely, like when he recites a poem (more and more of it as the album goes on), stops an argument that interrupts a mock live performance of his Grammy-winning “i”, or interviews a dead rap legend to close the album. Any sacrifice that Kendrick has made, though, serves a greater purpose — evidence that he’s one of the most restlessly creative artists in music today.

The 79-minute To Pimp a Butterfly, Kendrick’s follow-up to 2012’s good kid, m.A.A.d city, tests any number of limits, including the length of time listeners can comfortably sit with an album and just how thoroughly a rap superstar can resist his knack for easy hooks. For some, listening to TPAB might feel like being in a straitjacket: If you’re not sold on Kendrick yet, its vast flood of ideas could come off overwhelming. Spend enough time with it, though, and the album proves to be intensely alive, celebrating humans’ potential for triumph, recognizing how completely things can go awry, and condemning the scars left by American history. While the album is a lyrical landmark above all, there’s no missing that it’s a rich body of work all around.

If it’s lonely at the top (where he’s been ever since GKMC), then Kendrick is both petrified by his isolation and in awe of his freedom. That’s not to say that what he’s doing is unprecedented, because TPAB absolutely radiates the complexities of long-established forms of black music; so many of these alto sax and trumpet flourishes double as reminders to listen to more jazz. Even with that sense of familiarity, though, TPAB is endlessly inventive, featuring songs within songs, use of extended metaphor, and, of course, Kendrick’s explosive flow patterns.

It makes sense that the album lacks musical boundaries. Kendrick’s thoughts are all over the place, too — from Compton to Congress, from the lows of depression to the highs of artistic confidence. There is nothing as thematically prevalent as Kendrick’s urge for black Americans to rise above racism, but he’s also enamored with the country as a whole, not to mention his troubles with depression and how his faith in God helps him keep his head above water. The album may not have a definite message, but on “i” and elsewhere, it promotes self-betterment. “Shit don’t change until you get up and wash your ass,” sings Bilal on “Institutionalized”. As simple as it sounds, it’s pretty indicative of Kendrick’s idea that millions (if not billions) of people are constantly running from oppressive forces.

It’s dead-serious stuff, but there are still songs here that allow you to relax a little. “Alright”, with its optimistic Pharrell hook, is one. The live, partly rewritten version of “i” is another, at least until that scuffle breaks out in the crowd and Kendrick, disgusted, uses the opportunity to hammer home the importance of unity among black Americans. Elsewhere, “Momma”, “Hood Politics”, “How Much a Dollar Cost”, “Complexion (A Zulu Love)”, and the first five minutes of “Mortal Man” are relatively straightforward hip-hop tracks. The catch is that they’re heavier than they seem at first blush; on “How Much a Dollar Cost”, for example, Kendrick raps about refusing to give a dollar to a homeless man who turns out to be God.

By contrast, some of these songs are hard to listen to in the best possible way. “u”, the frantic companion to “i”, is the sound of Kendrick writhing with anguish in a hotel room, bottle in hand, and it hardly sounds like he’s acting. Later, the bone-cracking drums on “The Blacker the Berry” give it a deep pulse, but it’s hard to enjoy the song too passively given the anger — and determination — in Kendrick’s voice (“You vandalize my perception but can’t take style from me”). “King Kunta” takes the easy-on-the-ears/challenging-to-the-mind dichotomy in yet another direction, as Kendrick invokes the terrors of Roots while exuding confidence over a sprightly funk instrumental.

On this album full of sudden turns, nothing is more unexpected than the arrival of 2Pac on the closer, “Mortal Man”. In what plays out as a fantasy, Kendrick asks Pac about his humility at the height of fame and his approach to adversity; Pac’s answers, taken from a 1994 interview, are unsurprisingly thoughtful. It’s a dramatic ending to a dramatic album, but when Pac ultimately disappears into thin air, it’s not as bleak as it sounds. Kendrick can’t be Pac or know everything it took to be him, but he isn’t going to let doubts stop him from making groundbreaking music. With To Pimp a Butterfly, it’s never been more apparent that he’s doing just that and prepared to stride past any and all obstacles.