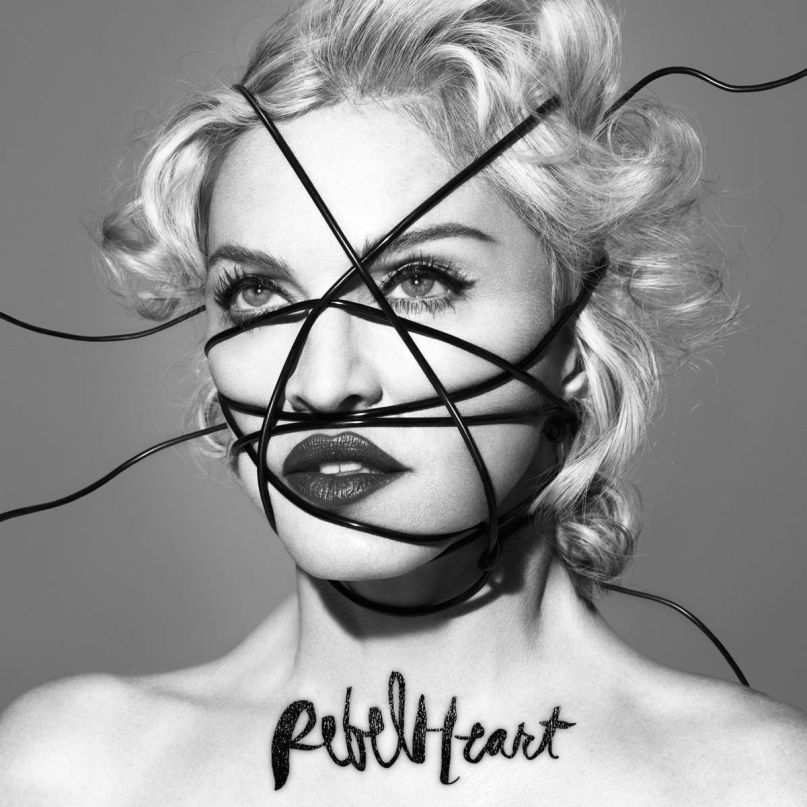 Madonna never lost touch with the culture she once created. Even the weak points in her generation-spanning career throb with a love of pop music, its mass appeal and its potential for mass transcendence — what it can do to people. The singer and performer’s latest album, Rebel Heart, is her 13th in 32 years, and in some ways it carries the most of Madonna’s personality since 2000’s Music. But like her last two albums, 2008’s Hard Candy and 2012’s MDNA, Rebel Heart leans too steeply into too many trends at once, making it a scattered affair that flashes between drudgery and brilliance.

After a polarizing promotional rollout — Madonna was forced to release about a third of the album after a handful of demos leaked, and then she blithely compared herself to Nelson Mandela and Martin Luther King Jr. by photoshopping their faces into the album’s cover on Instagram — Rebel Heart appears in all its glory with features from Chance the Rapper, Nicki Minaj, and (perplexingly) Mike Tyson. Behind the scenes, she’s got Kanye West, Diplo, Sophie, and Blood Diamonds all co-producing on various tracks. At points, that roster is exactly as jarring as it looks on paper. Diplo’s contributions alternate between buoyant and obnoxious, while PC Music affiliate Sophie feels underused, like an afterthought snagged for the name recognition among the SoundCloud crowd.

The strangest of Madonna’s new tracks is also its most illustrative cross-section. When it first saw the light of day in December alongside five other refurbished leaks, “Bitch I’m Madonna” stirred controversy even among casual fans. Sophie’s playful squiggles scrape against Diplo’s plodding breaks, Madonna sings in a nasal tease, and Nicki Minaj shows up for a leaden verse, all in one single. And yet there’s something addictive in the mess, something in the way the words of the title ring out like an air horn, accompanied by a few of Diplo’s actual air horns. It’s grating, immodest, disorienting, and very Madonna.

Yes, she’s a 56-year-old woman tossing out the word “bitch” and singing about getting wasted. That’s exactly why she gets to lay claim to this empire we call pop. On “Devil Pray”, Madonna lists off the drugs she’ll do tonight — weed, ecstasy, glue, you name it. The words sound a little clumsy in her voice, but they segue into one of her strongest choruses in decades. Here, Madonna’s voice is pitch-shifted into a ghostly echo — and unlike those “Bitch” beats, the production slides in perfectly. It’s one hell of a song about getting fucked up on every molecule imaginable, but it’s also heavy with the longing for self-purification and direction. After all this time, Madonna still wants to be saved.

Opener “Living for Love”, originally intended as the album’s lead single, plays as pure Madonna, a dancefloor anthem about loving life in spite of hardship. It’s hard not to think of “Born This Way” at the chorus, but it’s great to hear the pro who invented the style take another stab. “I deserve the best, and it’s not you,” Madonna sings, and you can almost see her lacquered nails glinting as she flings both middle fingers in the air.

“Living for Love” and “Devil Pray” may be the best Madonna songs in years, but their placement as track one and two makes Rebel Heart feel absurdly front-loaded. On “Illuminati”, Madonna speak-sings through a dance jam mashed up with a conspiracy theory message board, while “Iconic” lumps lazy rhymes into an awkward hybrid of EDM and hip-hop featuring one of hip-hop’s finest. Even Chance sounds out of place here amid the bass drops and robot vocals. The lukewarm love song “Joan of Arc” couples easy, inoffensive melodies with historical Christian imagery, the piano-driven “HeartBreakCity” feels like an overproduced rehash of a long-faded song, and the carbonated ballad “Body Shop” loops clumsy holes between its car metaphors. By the time she spits the line “bitch, get off my pole” during the Christianity-as-sex drag “Holy Water”, Madonna hardly sounds engaged at all.

By the time the hour wraps, Madonna makes an unusual move — to confront the album’s clumsiness seemingly head-on. After a mostly dull side B, “Wash All Over Me” arrives like a vivid counterpoint to “Living for Love”, a slow ballad about insecurity and the release that comes with admitting it. “In a world that’s changing/ I’m a stranger in a strange land,” Madonna sings. “I walk this razor’s edge/ Will I stand or will I fall?” When the world that you made goes on to change without you, keeping up becomes a bigger and bigger risk. If you’re Madonna, you take that risk no matter how likely you are to come out the other side without stumbling.

Essential Tracks: “Living for Love”, “Devil Pray”, and “Wash All Over Me”