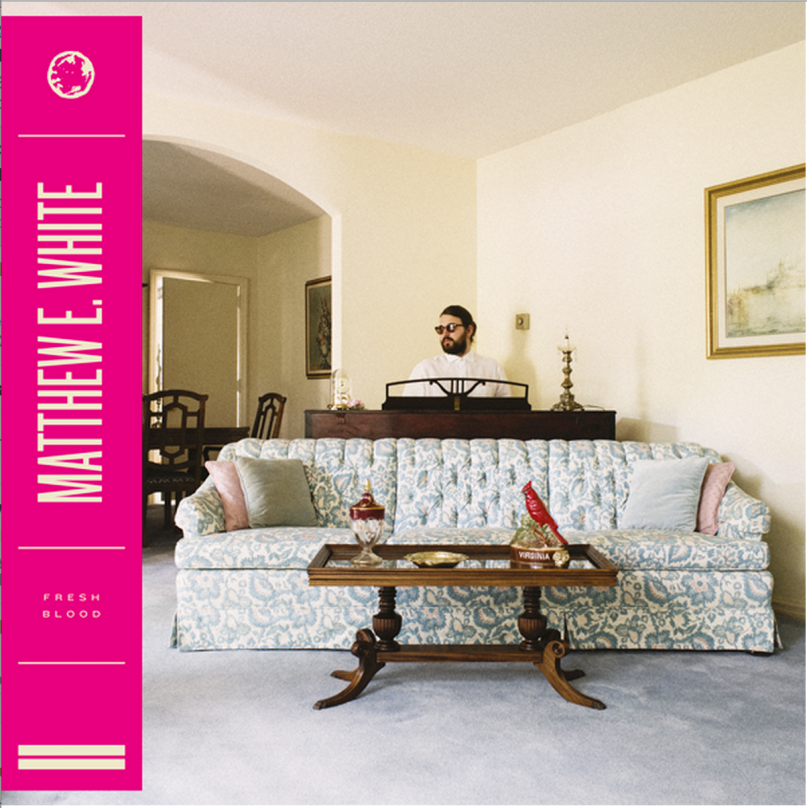 Everything on Matthew E. White’s second full-length album, Fresh Blood, happens in Technicolor, on a scale big enough for a drive-in screen. His artistry lies in the subtle details: hushed ooh la las, swelling strings, friendly horn rhythms. Multilayered and painstaking arrangements weave in and out of Fresh Blood’s 10 tracks, but White largely tames them, and the sweat that must have been poured into the finished work doesn’t leave much of a stain. It’s a full-bodied, frequently gorgeous and technically sound effort, but one that leaves you wondering if White could have taken it one step further, into territory that builds more radically on the muscular sound established in his debut.

Think of the story behind Spacebomb Records, which White co-founded in Richmond, Virgnia, as a kind of modern-day fairy tale. The label boasts an in-house band and production team, and while this old-fashioned approach would seem to run a high risk of churning out albums that are schlocky and high-concept or feel overproduced, Spacebomb has a near-perfect track record thus far. Natalie Prass’ self-titled debut, released earlier this year to glowing acclaim, went a long way toward providing more validation for a classic R&B and gospel-inspired sound that White showcased in the label’s first release, his own 2012 debut, Big Inner. With each of those two albums, and again on Fresh Blood, so much seems possible; each contains multitudes in a modest, roughly hour-long listen. They draw heavily from a specific time in American music history, but they’re nothing if not democratic in their execution — these are songs for everyone, not just those that get the reference. As the newest Spacebomb offering (released by Domino but recorded by the same production team, in the same attic studio space), Fresh Blood is a joyful and skilled, if not incredibly varied, portrait of a veteran artist at the height of his powers.

“Rock & Roll is Cold”, the album’s lead single, pokes fun at the modern rock landscape in the most gentle, rollicking way possible. “You said you found the soul of rock and roll, but rock and roll, it don’t have no soul,” White sings over a major-key piano groove punctuated by mellow but steady horn blasts. The track’s message remains a bit difficult to pin down, but that can’t hold back the song’s fun-loving nature. When it comes to suggestions for rock artists to take themselves less seriously, this one is about as easy to swallow as they come.

In contrast to Big Inner, the lyrics throughout Fresh Blood trend toward the more timely and topical, and as a result the work is less about good times from start to finish. The lush “Tranquility” is an ode to Philip Seymour Hoffman, and it manages to pay homage beautifully without ever being morose. “I read 65 bags of heroin,” White sings in his most hushed, down-tempo voice. “We feel no bitterness.” The song’s instrumentation devolves into distortion for a few moments about halfway through before bouncing back to a gentle lullaby. White’s skilled lyricism is on full display here, if you can dig through the strings to get at it: “I’ll climb inside your footsteps and sleep beneath your sea,” he sings, expressing the kinship that he feels to a fellow artist whose demons got the best of him.

Fresh Blood loses momentum between its peaks. Despite the groovy, handclap-punctuated “Vision” — the penultimate track that sometimes plateaus into moments of strings-fueled euphoria — the latter half of the album particularly drifts into a mellow and sleepy tone. White’s lyrics are always nuanced; he transitions easily from light, heartfelt gospel on “Circle ‘Round the Sun” (“I’m just passing through, Lord, we have no friend like you”) to cheerful hedonism on “Feeling Good is Good Enough” (“Oh, I wanna see you this morning, I want to see your beautiful lashes opening”). Change-ups in tempo and mood are harder to come by on the album, though. The minor-key “Fruit Tree” and opener “Take Care My Baby”, which starts out tender and moves into something more full-bodied and fierce (“Let me look at ya, I’m pumpin’ fresh blood for ya”), showcase a sharper side of White’s songwriting and instrumentation that don’t get nearly enough play throughout the album as a whole.

Rock and roll might be cold, but after the polished, orchestral odyssey of Fresh Blood, I found myself hankering for the raw, jagged edges the genre once had in spades. In contrast to Prass, whose ultra-feminine voice is bolstered well by the soft-edged Spacebomb sound, White seems like he could carry something a little heavier and more frenzied if given the opportunity, and Fresh Blood begs for that risk. Paying homage to rock and roll’s rich history and roots is a beautiful thing, but maybe there’s a reason why it kept on evolving.