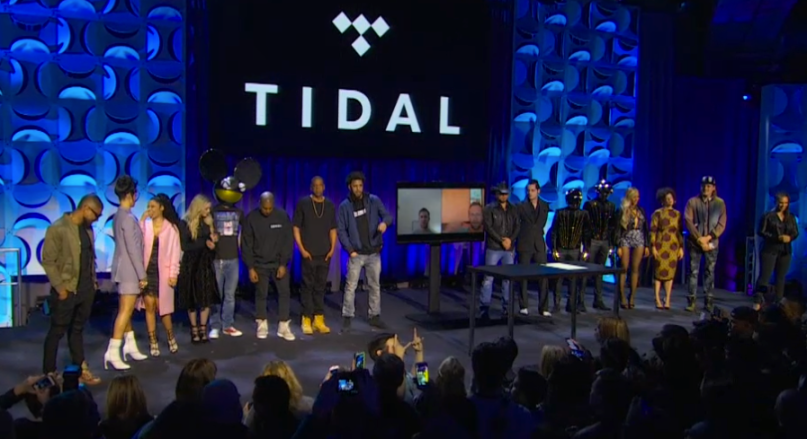 All these artists were at hand for today’s event and showed their commitment by signing a declaration on-stage.

TIDAL is described as a “platform owned by artists” with the goal “to re-establish the value of music.” Speaking on behalf of the group, Alicia Keys explained, “We want to create a better service and experience for fans and artists. Our mission goes beyond commerce and technology.”

Update: Jay Z spoke to Billboard about his vision for TIDAL. Read below.

A video proceeding the event featured footage from a recent summit in which the owners of TIDAL gathered to discuss their vision. Daft Punk described the group as “the Avengers of Music.”

As previously reported, TIDAL offers two paid subscription options: $19.99 a month for high-fidelity audio, and $9.99 for standard quality audio. TIDAL can be streamed on the web, and downloaded for iOS and Android devices.

It’s reported that TIDAL’s owners will exclusively release their music through the platform, but that has yet to be confirmed.

Replay the event below.

Update: Jay Z spoke to Billboard about his vision for TIDAL. “We didn’t like the direction music was going and thought maybe we could get in and strike an honest blow and if, you know, the very least we did was make people wake up and try to improve the free vs. paid system, and promote fair trade, then it would be a win for us anyway,” he explained.

“People are not respecting the music, and [are] devaluing it and devaluing what it really means,” Jay Z added. “People really feel like music is free, but will pay $6 for water. You can drink water free out of the tap, and it’s good water. But they’re OK paying for it. It’s just the mind-set right now.”

He said the overriding goal is to ensure artists are properly compensated for your work, and not just the owners — each of whom control a 3-percent stake in the company — will reap the benefits. “For someone like me, I can go on tour. But what about the people working on the record, the content creators and not just the artists? If they’re not being compensated properly, then I think we’ll lose some writers and producers and people like that who depend on fair trade. Some would probably have to take another job, and I think we’ll lose some great writers in the process. Is it fair? No. If you put in work, everyone else, you go to work you get paid. That’s fair trade. It’s what our country is built on.”

Jay Z also said he hopes TIDAL will inspire artists to take more risks creatively. He explained, “Artists come here and start making songs 18 minutes long, or whatever. I know this is going to sound crazy, but maybe they start attempting to make a “Like a Rolling Stone,” you know, a song that doesn’t have a recognizable hook, but is still considered one of the greatest songs of all time, the freedom that this platform will allow art to flourish here,”

And while he would not confirm it outright, he did tease TIDAL acquiring exclusive content from artists. “Anything they want to offer, you know; just be as creative as possible, that’s the only charge, really. Make it look really good and make everyone that consumes it think, “Man, I got something really great.” Treat the people with respect; make it memorable.”