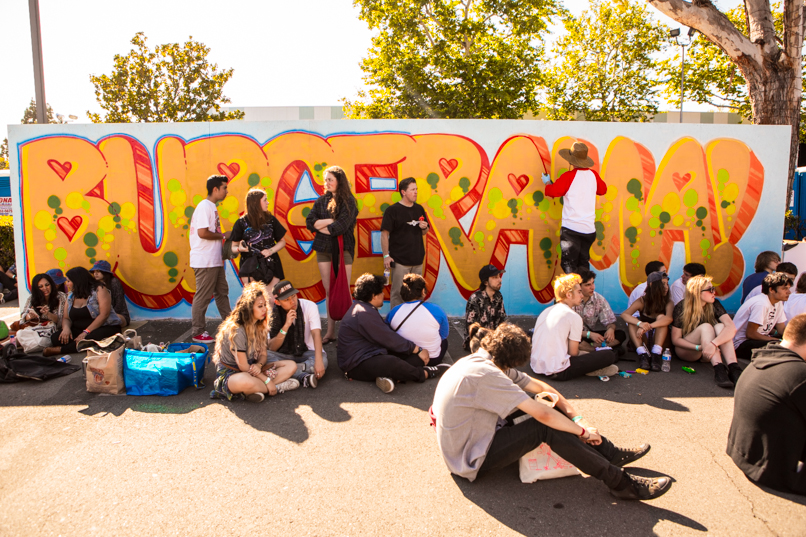 Bigger isn’t always better, but in the case of burgers and, well, Burgeramas, it seems to be a good rule of thumb. An easy way to upgrade the sandwich is just to add another patty, and for Burgerama, now in its fourth year in Santa Ana, California, bulking up on big-name acts like Weezer and Gang of Four instantly added to the appeal for a fest that’s biggest knock is that it books a very similar lineup year in and year out.

Now in its second year of having an outside stage in addition to the two built-in stages within the confines of the Observatory, the event was noticeably smoother than any of its previous incarnations. Sets mostly ran on time, and while the indoor stages could get pretty full, getting from point A to point B never became overly laborious. This may seem like a bare-minimum requirement, but with festivals, you’d be surprised how the most basic of expectations are sometimes not met.

But with a two-day event that featured buzzy acts like Hinds, Girl Band, and Soko along with Burgerama vets like Ty Segall, Thee Oh Sees, and FIDLAR, it became interesting to see just how much harder the out-of-town (or out-of-country) acts brought it than the locals. For some of the acts that play year-in and year-out, there was the sense that this was simply another Burgerama, while bands like Twin Peaks and Palma Violets, well-versed on the difficulties of playing fests, relished the chance to play in front of a thousand enthusiastic people.

And this is the heart of what makes Burgerama fun. Sure, Weezer and FIDLAR can command a big audience, but most of the acts, even down to Ariel Pink and Bleached, don’t play in front of many more than a few hundred on any given night. But at Burgerama, every set is packed with more than these bands typically play in front of. It is almost a chance to see how smaller bands would be received if they were big-ticket headliners. In some cases, like the awful Tomorrow’s Tulips, it becomes apparent at just how unready they were for such a big crowd. But the following 10 acts managed to be that second patty on the concert’s proverbial burger. Or something.

Click ahead for the 10 best sets of Burgerama 2015 plus an exclusive photo gallery.