IndieGoGo campaign needs $2 million to bring back the 'staches 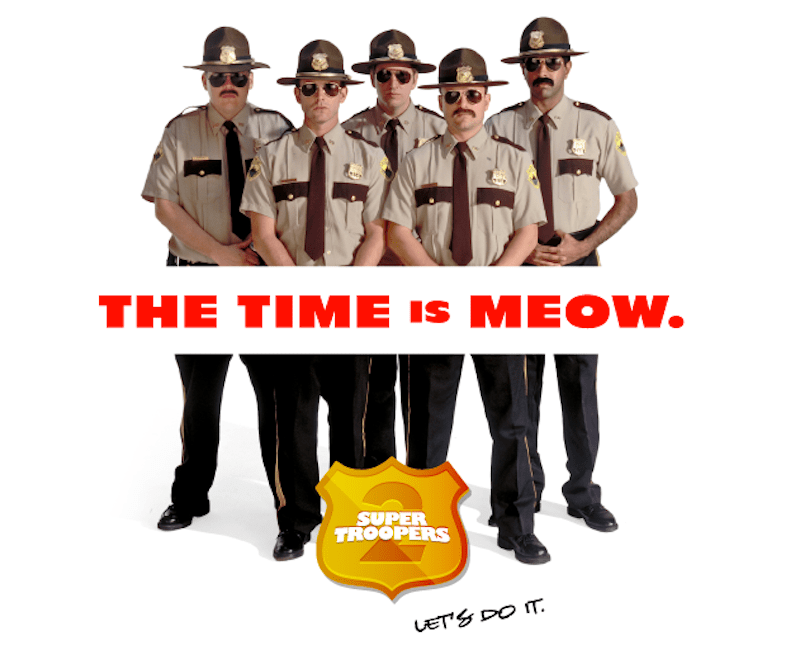 Broken Lizard made their mark on cinematic comedy with the 2001 cult classic Super Troopers. Ever since, fans have been clamoring for troupe members Jay Chandrasekhar, Kevin Heffernan, Steve Lemme, Paul Soter, and Erik Stolhanske to make a sequel, and the writers/stars haven’t been shy about wanting to do it. Now, it looks like it could finally happen as they’ve launched an IndieGoGo campaign to fund a new film.

According to the pitch, there’s a script all finished and Fox Searchlight is ready to distribute the feature. All Broken Lizard needs to do is raise $2 million to fund the production; the downside is they’re saying that if they don’t reach their goal, the film will officially be dead and never get made. Also, Farva will die in the trunk of a car.

Update – March 25th, 8:00 p.m.: The IndieGoGo has been fully funded, meaning the movie is officially a go! In related news, some generous being actually laid out $35,00 for the squad car.

As incentives (besides getting a long-anticipated movie), they’re offering the usual posters, DVDs, and T-shirts, but they’re also the first IndieGoGo fundraiser to offer movie theater tickets so you can actually see the film you’re funding. There’s also the chance to smoke legal marijuana with the troupe in Colorado, compete against them at the first-ever Broken Lizard Beerfest Tournament, name a city or character in the film, and even have the guys act as your groomsmen or bridesmaids at your wedding. You might even be able to get one of the cop cars from the movie.

At the time of this posting, 420 backers have pledged $45,000 and the drive’s only been live for an hour. Head to IndieGoGo to contribute and check out the in-character pitch video.

Below, watch an interview Broken Lizard gave to Collider in which they discuss the crowdfunding effort, what we might see in the new film, potential cameos, and the status of the potential Beerfest sequel Potfest.