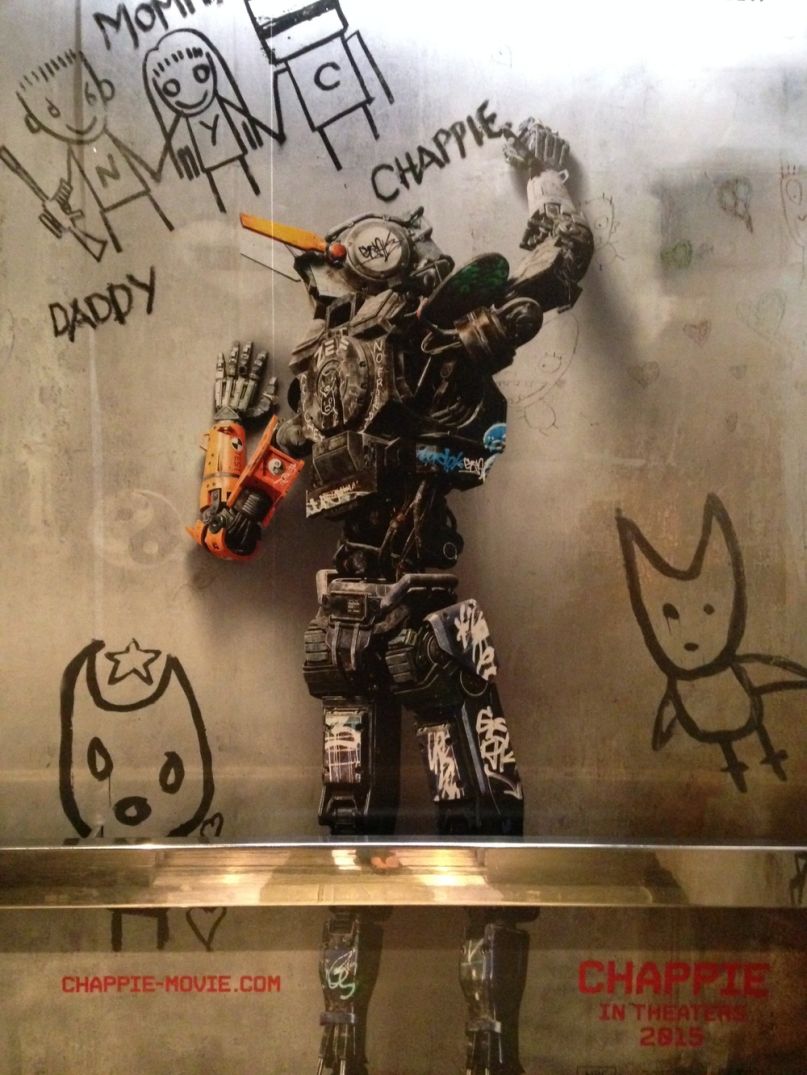 It’s safe to assume that Neill Blomkamp sold 20th Century Fox on the idea that he was the man to take over the Alien franchise based on two exhibits. Exhibit A: incredible concept art. Exhibit B: District 9 — a great movie he made six years ago. There is no way they reacted in the positive after seeing his latest foray into South African sci-fi. Unless these particular film executives go ninja over the antics of Die Antwoord, one viewing of Chappie would have had them ringing up Blomkamp to tell him, “Don’t call us, we’ll call you,” before dialing up the Strause Brothers to follow-up AvP: Requiem. More sporting goods-store attack scenes, please and thank you!

There is nothing original and interesting about Chappie. It’s a hodgepodge of better science-fiction films from yesteryear whose films have been imitated countless times to no avail. If it is a satire, its message is unclear. If it is an action movie, there is no momentum. Chappie’s sole payoff is the special effects achieved to create its titular (or some might say eponymous) character. Unfortunately, the film is style way over substance in the case of Blomkamp’s third full-length feature. After following up the universally-beloved District 9 with a lukewarm reception for Elysium, his latest film isn’t necessarily a make-it-or-break-it moment, but dilutes the warmly-received news that he is taking on Alien.

Chappie begins a few years from now. The film goes beyond the ideas put forth in Paul Verhoeven’s Robocop to a reality in which robots make up most of Johnnesburg’s police department. The man to thank is Deon (Slumdog Millionaire’s Dev Patel), although the young engineer’s success has ruffled up the mullet of fellow inventor Vincent (Hugh Jackman, full-on weasel mode). Deon’s Robocops (er, mechanized police force) are superior in both make and model to Vincent’s oversized Moose; a giant robot that bears absolutely no resemblance to Robocop’s ED-209. Do you hear that, 20th Century Fox? Absolutely no resemblance to your property.

Deon wants to go further. After several experiments, he has found a way to equip a robot with the ability to learn and feel human. He approaches his boss (a wasted Sigourney Weaver) to share his discoveries, but she turns him down. Undeterred, Deon steals a robot on its way to destruction with intentions to enhance it. Unfortunately for him, and the audience, Die Antwoord shows up. I’m not all that familiar with Die Antwoord, though I recognized the duo that make up the group early on the film (Watkin Tudor Jones and Yolandi Visser). They are introduced in the first 10 minutes for what I thought was a cheeky cameo, only to realize they are basically the lead characters.

What’s worse is that they are playing themselves, albeit criminal versions of themselves. Ninja (Jones’ alias, newbies) even wears a Die Antwoord t-shirt at one point in the film. Every time they appear on screen, they’re a total distraction. It’s not that Ninja and Yolandi are bad actors, they just carry out a bad idea by Blomkamp. They’re loud and obnoxious, but totally believable in their roles as gangstas (their words) who kidnap Deon’s breakthrough robot and raise him to be like him.

Yes, the robot Chappie is a technical marvel. Blomkamp has been blowing us away with the use of special effects in his films dating back to his alien creations in District 9, and Chappie’s robots are no different. There isn’t a moment in the film where Chappie or his robotic brethren look fake or digitally drawn in. This is saying something for a film in which Chappie appears in 90% of it. Sharlto Copley (District 9, Elysium) goes full Andy Serkis to the point where you believe he is a fully-functioning robot with artificial intelligence. Sadly, much like his “parents” Die Antwoord, Chappie becomes an annoying mess. He is given necklaces and gold chains to wear around his robotic neck to match the new “tattoos” given to him by “Daddy” Ninja. His mannerisms and speech mimic that of his new family, growing wearisome after minute one.

The special effects are commendable, but Blomkamp’s action sequences in Chappie are just boring. Marred by the occasional and unnecessary slow-motion, all action leads to a big climax which finds “David” Chappie squaring off against “Goliath” Moose in a scene that, once again, bears no resemblance to any sequence in either of the first two Robocop films. Absolutely none. And the same goes for Short Circuit. Sarcasm aside, I must give credit to Blomkamp for actually hiring an actor of Asian-Indian descent to play the film’s main inventor as opposed to hiring a brownfaced Fisher Stevens.

Overstuffed with half-baked plots that include comedic heists, timetables, jealousy, hostages, gangs, riots, people speaking every thought (Vincent), people transferring consciousness, Die Antwoord listening to Die Antwoord, and robots, Chappie is half-formed. After the two-hour film reaches its conclusion, it’s more than apparent that Blomkamp’s original short-film version (Tetra Vaal) should have been the only version.

In a recent interview with Rolling Stone, Blomkamp said the following: “I was listening to Die Antwoord while I was writing very late at night — and suddenly this thought just came to me out of nowhere: What if this band were to raise one of Elysium’s artificially intelligent robots, but with a clean slate? And they tried to make it do all the illicit shit they do? What kind of fucked-up movie would that be?!” Some questions need never be answered, but Blomkamp just had to answer it.

Best of luck with Alien. Just make sure Riff Raff isn’t anywhere near it.