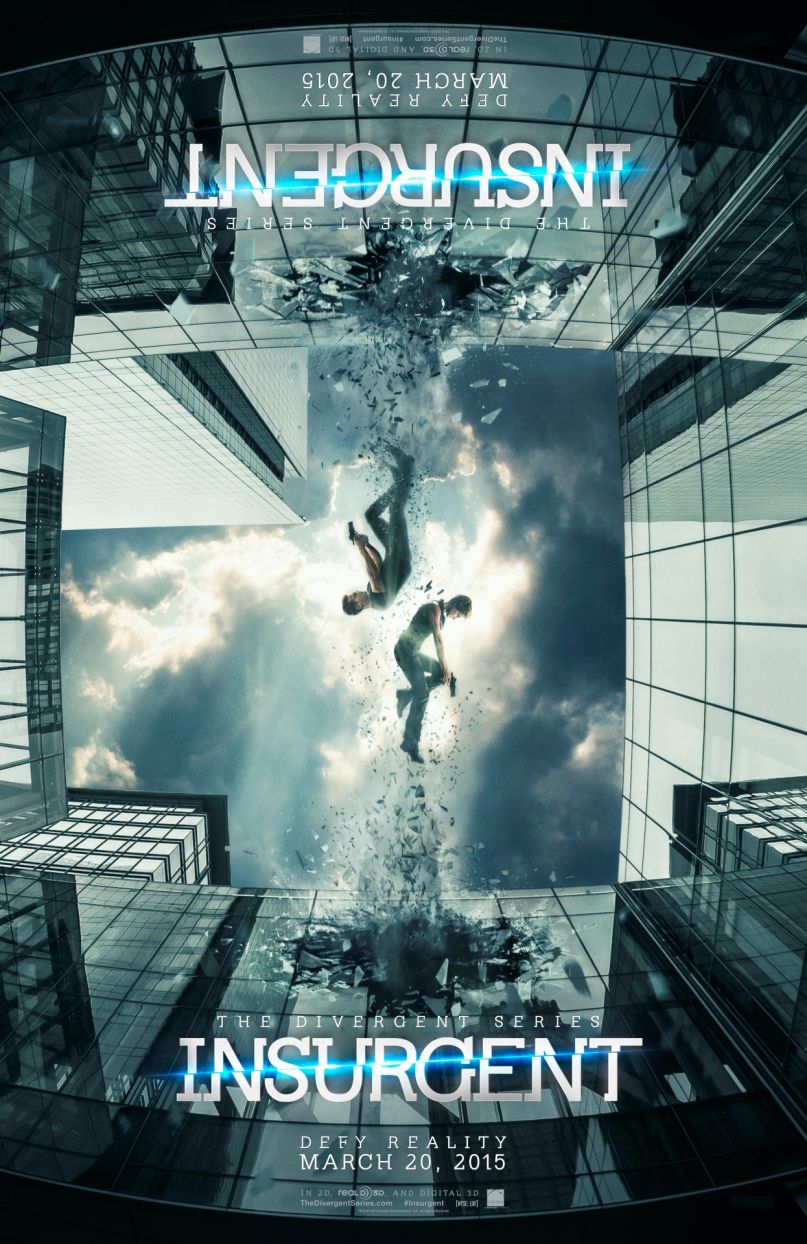 Veronica Roth’s Divergent books are breathlessly plotted and totally true to themselves, even if her dystopic YA stuff is constructed with more holes than Swiss cheese. Yet maybe that’s why Roth’s books and movies are a little easier to go along with than most gritty sci-fi youth flicks of late. They keep you preoccupied and compulsively entertained before you ask just what the hell is even happening.

Insurgent’s future presents a society that has divvied itself up into temperament-based factions. It’s junior-high political and sociological discourse, dressed up in decay. Personality-types have gone scientific (clumsily so at best), making markers for how people should be placed in society, and it’s taken so seriously that there are LED display PKE meters. A little light-up circle can read a person’s Thetans, er, allegiance. Think about it too long and it becomes quackery, but for a YA sci-fi actioner, at least it’s a semi-big idea about dehumanization and identity. How these groups were determined seems illogical, yes (fearless people, honest people, H&M-dressed people…), but Insurgent uses the best of its abilities to commit to this questionable conceit. Besides, it’s the future. These kinds of things can be explained away with dialogue, or plot distractions, and, well, it takes a while, and uh oh, the Dauntless and Erudite factions are coming in hot. No time to think.

The black-jacketed baddies are after Tris. See, Tris is hiding from everyone in a hippie hash commune and was already found. SUVs are crashing in, she’s gotta bolt. Tris, grab a gun! But wait, you’re afraid of guns after the last movie! Ruh roh! Protect your brother! Protect your lover! Look out, it’s Jai Courtney, the modern example of Aryan-looking evil! Oh, and Tris cut her hair and is, like, feeling guilt and stuff over killing some people in the first film. To the futuristic trains!

Although, in the post-apocalyptic future, militants can afford to innovate new sensor technology, yet they can’t think to follow a train, one of very few in a dilapidated Chicago, with a fugitive on it?

Quibbles over logic aside, Insurgent entertains in the flashy and fast way of its predecessor, Divergent. At its worst, this is teenybopper stuff made with leftovers from The Matrix and The Hunger Games. At its sturdiest, it’s like a gossipy techno-serial, with a ridiculously strong lead and young audience-positive themes of coming to terms with yourself in a world gone clique-y. In the end (and this one has a ridiculous cliffhanger), Insurgent is breathlessly paced, well-cast, and thankfully kind of entertaining in its chase film way.

Following right after the events of the first film, Tris (Shailene Woodley) is in hiding with her mentor and beau Four (Theo James). Dauntless found some MacGuffin that holds the keys to their world’s future, or something nebulous like that. Bad guys want to exploit it, because they always do, and it can only be opened by a “Divergent,” someone that could belong in any faction, and Tris is one of special value. Divergent is an instinctive adventure, made presentable with nifty VR simulation scenes, a game young cast, and swift action. The appropriate label is “silly, but fun.” No scene lasts too long; it’s almost like video game logic. Tris has to unlock certain achievements, or make it through shootouts and fistfights, all capably rendered, until the secrets of that magic box are revealed, or Kate Winslet’s uptight Thatcher-esque villain is defeated. Or when Tris finds her true self, or maybe it’s about unifying the factions … you know what, again, a lot of familiar stuff happens, but stick with Shailene Woodley and you’ll get there in good time.

Shailene Woodley’s a bright, young star capable of bringing depth and integrity to young adult adaptations. And boy can she throw a punch, like, at all the boys. Go, Tris! Whereas the Hunger Games films present a pensive, mournful Jennifer Lawrence in full dramatic form, the Divergent series wants Woodley to do the same thing and brandish guns and knock out thugs, too, which is kind of cool. These series go to show that you can make interesting, strong, female-led franchises and make tons of money doing them. Sure, the story’s not bulletproof, and the speed of this movie is demanding, but Woodley is more than capable of bearing the burden, and she comes out swinging.

The Divergent series is quickly shaping up to be a less ostentatious cousin of The Hunger Games. Produced by Summit/Lionsgate (producers of the Suzanne Collins movies as well), Divergent feeds a more easily dismissible need for action and Tiger Beat stars, whereas the other series wants to be lauded. The thing is, Roth’s movies succeed as decent B-movies; Insurgent has greater rewards with lower goals. Tris just needs to run, girl, run. See Tris run.