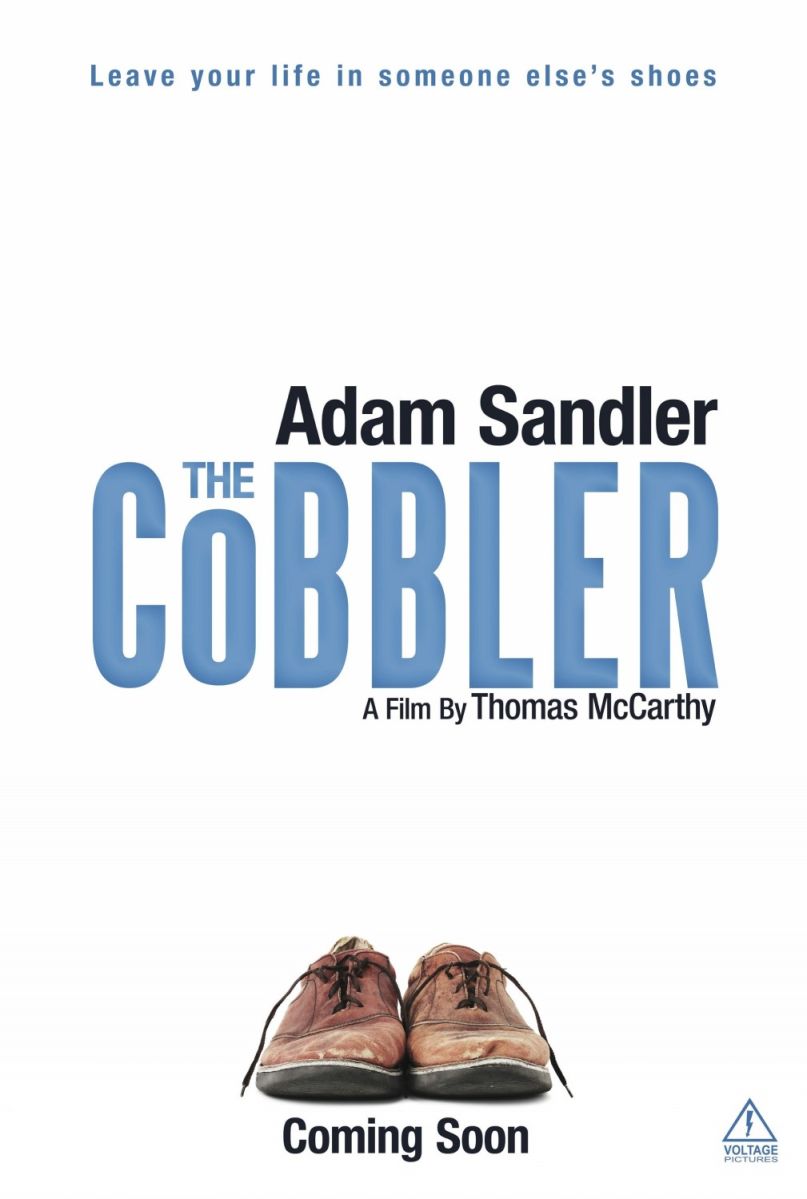 So there’s this stitching machine sent down to Brooklyn from angels? Let me get this straight. Adam Sandler is a shoe repairman in New York. Max Simkin. He’s all shy and withdrawn. He discovers the spaghetti Jesus stitching machine in his store’s basement and finds out that when he works on a pair of shoes with that machine, the shoes turn magical, allowing Simkin to become the person who owned those shoes. So, Simkin, a schlubby shoe man with a pickle habit, can be a teenage boy or even a corpse if he wears their shoes after repairing them?

To clear this up, we get a montage of stitching shoes and becoming other people. He becomes a larger cross-dresser, a thin African American man, a Latino with a goatee and forehead tattoos, and of course, Method Man. Bong bong. A series of poor New Yorker actors who can’t be on Law & Order anymore have to look wide-eyed in disbelief for Sandler’s weird little identity crisis.

And he uses the stitcher to skip on bills and incidentally save his neighborhood?

Well, there have probably been more foolish ideas for a movie.

The Cobbler is truly it: Adam Sandler’s biggest flop and most embarrassing movie. Somewhere, Going Overboard is sighing with relief; it’s just that cruddy. Loaded with good intentions, and executed with bad choices, Cobbler has clear trouble finding footing as it veers from socially serious New York story to goofy magic story to a no-bull superhero premise.

There’s something resembling a cute idea in here, about a magic shoe stitcher. Jeez, given Tom McCarthy’s contributions to the script of Up, maybe this would’ve been best suited for animation, a sort of modern fairytale in the city. But holy crap does McCarthy stitch this thing together something awful. The Cobbler continually makes one ask the same question: What is the point of this movie? Is it a modern Yiddish fable? Comedic fantasy? Sandler vs. those scumbag landlords? I don’t know, but more importantly, I just don’t care. Or rather, The Cobbler fails to make us care. If anything, it’s impressive in that it gets progressively worse.

In fact, this is just the script from You Don’t Mess with the Zohan, but a sad bastard version. Sandler’s Simkin is bland, never truly thrust into good deeds or action. He’s just having a laugh as different types while almost taking on a real estate company by happenstance. At least Zohan had the nerve to shtup old ladies in Brooklyn. That’s kind of funny! Here, Sandler goes for passive amazement at a very specific gimmick.

The whole premise is a logistical, ethical minefield. What happens when he become Dan Stevens and walks in on a naked lady? Or when he becomes a cross-dresser and plays with newly developed naughty bits? I’m saying Sandler plays with a transexual’s crotch. What a great laugh, Sandler.

What you may care about is the amount of popular TV show regulars that show up in here. Oh look, The Yellow King from True Detective is a hired goon. Hey, the pregnant inmate from Orange Is the New Black shows up. Grizz! From 30 Rock! It’s been a while!

Sorry, this star-spotting was a needed distraction while watching The Cobbler.